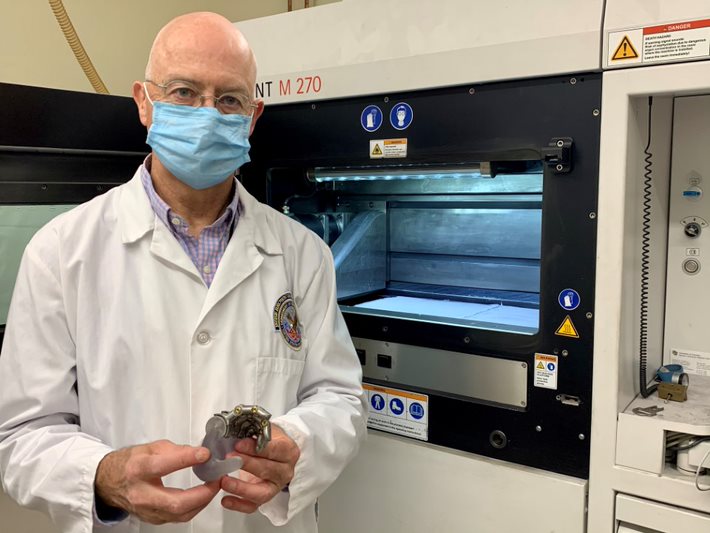 His favorite movies include 21st century science fiction thrillers “Surrogates,” “Ready Player One,” and “Iron Man,” as well as “Star Wars,” “Blade Runner,” and “Robocop” from years back. He has absorbed the readings of renowned sci-fi authors David Brin and Iain Banks.

With a seemingly endless supply of curiosity, Weir does a lot of mental doodling and diagramming. He also likes to make things.

“I can’t help myself,” says Weir, an expert in prosthetics technology at the VA Eastern Colorado Healthcare System. “I read so much science fiction. So maybe my ideas aren’t completely strange to me. I guess you get exposed to ideas. Then you see if the idea has merit or not. You can work it from there. A lot of times, I get ideas and it’s like, `Oh, I see pieces from different places, and I see how they go together.”

The first of its kind

Today, Weir is doing just that. In his latest technological challenge, he’s co-leading the development of an innovative power source for wearable devices like prostheses and implantable devices, such as pacemakers or deep brain stimulators that will harvest electricity from blood sugar. If successful, the technology will be the first of its kind.

In theory, the power source could be used for anything that’s worn on the body and needs electricity, Weir says. He and his colleagues are confident that the components needed to create such a device are in place. They also believe an opportunity exists to develop a system that optimizes and integrates those components to produce a viable system in size, power and efficiency.

That’s because of the invention of a cloth-like membrane – an anion exchange membrane – that can generate electricity in a high pH (acidity) environment like the body when blood flows over and/or through the membrane. Human blood is full of glucose, which is a form of sugar and a source of fuel for the body. The membrane reacts with those sugars and creates electricity as a by-product of the reaction. This electricity can be stored in a battery for later use to provide power for both implanted and external devices, according to Weir.

“It is the membrane that allows us to work with these sugars,” says Weir, who is also a professor of bioengineering at the University of Denver. “In the body, things are at a particular acidity. So we thought, `Let’s have a look at these membranes and see if we can use them with blood sugar.’ People have been trying to do implanted power systems that use blood sugars for a while, but they’ve always run into problems. That’s why we think our membrane is the thing that will enable us to succeed where others have not.

“We have to do the engineering, though, to put it into a form and shape so it will work in the body,” he adds. “There’s a lot of difference between moving a device from benchtop proof-of-concept to getting it into a form suitable for use even as an out-of-the-body type of fuel cell and then moving from an external system into an implanted system. We have a lot to do to develop the membrane from a prototype system into a physically realizable system.”

In Weir’s opinion, the technology would be a “game changer because we would be able to make and harvest power from people themselves, without having to charge anything out of the wall. You just eat your chocolate bar or something, and then you’d be good to go.”

“This is just experimental, but it’s high-risk, high gain,” he says. “It has the potential to be very impactful if we can get it to work, even on a benchtop or external system. It would be a novel sort of fuel cell technology.”