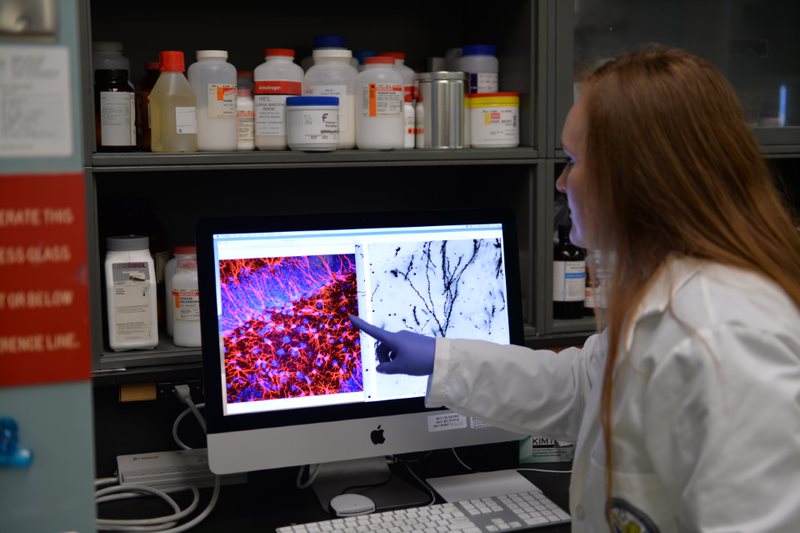 A new lab-based study finds that repetitive mild brain trauma causes a moderate loss of connection between nerve cells in an area of the brain that is critical for memory and cognitive performance.

The researchers also detected a major improvement in cell connectivity by using two compounds that have individually been shown to improve the health of brain cells in lab models of neurodegenerative disorders.

The results appeared in the journal Brain Research in July 2020.

Dr. Bruce Citron, a molecular biologist who worked at the Bay Pines VA Healthcare System in Florida at the time, led the study. He is now at the VA New Jersey Health Care System. His postdoctoral fellow, Dr. Whitney Ratliff, carried out the experiments and analyzed the data.

Understanding that traumatic brain injury (TBI) is the signature wound from the post-9-11 conflicts, and that one of the top symptoms of TBI is memory loss, the researchers focused their lab tests on the hippocampus, an important memory center in the brain.

“Despite the widespread impact of TBI, we do not have an effective treatment to prevent or reduce long-term damage following an injury,” says Ratliff, who is now a health research scientist at the Bay Pines VA. “Our goal with this study was to target the biological processes that occur in the brain following injury to improve the health of nerve cells and reduce further injury caused by secondary processes like inflammation.”

The study results complemented a previous behavioral analysis by Ratliff and Citron. They observed memory loss in mice with lab-induced repetitive mild TBIs – even months after the last injury – that signaled major changes in neurons (nerve cells) in the hippocampus. “The shape of the neurons was altered in such a way that would make them less connected and less able to communicate with other neurons,” Ratliff says.

Neurons, the primary units of the brain and nervous system, are responsible for receiving sensory input from the external world, processing and storing information, and transmitting signals through the brain.

In the behavioral analysis, the researchers did not observe the same memory deficits when the mice were treated with the two compounds that were later used in the cell connectivity study.

“We are quite surprised by the results from many of our experiments,” Citron says. “Sometimes, the results are exactly the opposite of what we have been hypothesizing. But in this case, the results we saw in the connectivity study were consistent with the clues we obtained in the first set of experiments.”

In the cell connectivity study, the researchers used the two compounds to simultaneously target factors that can influence important signaling pathways in the hippocampus linked to inflammation and antioxidants. The latter protect cells against substances that may play a role in heart disease, cancer, and other health conditions.