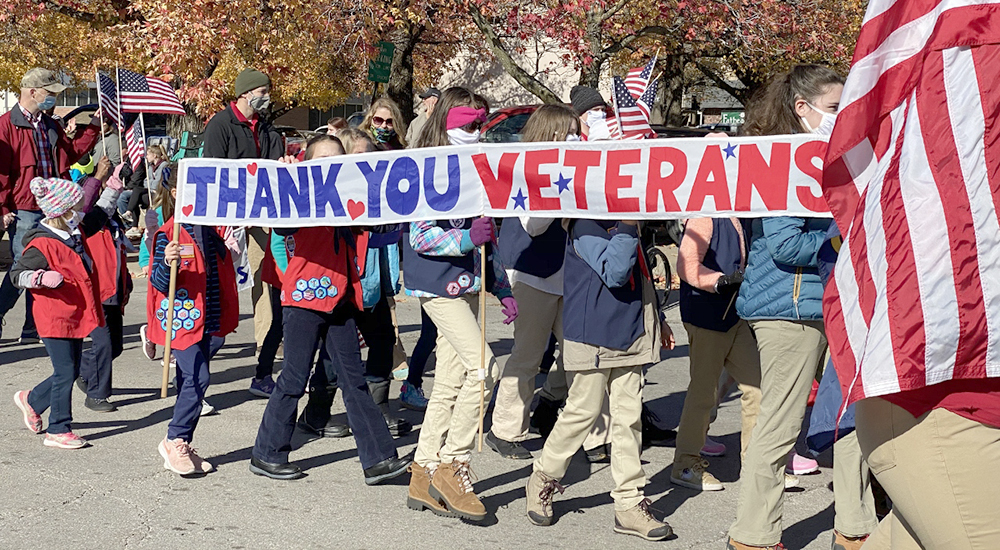 The Leavenworth, Kansas, VA invites you to watch this uplifting video with stirring narration by VA Secretary Robert Wilkie (from an earlier Veterans Day).

“Business Will be Suspended in City Today. All To Join In The Welcome Home Celebration.”

The first parade/observance was on Nov. 11, 1919. Leavenworth business owner William Small of the William Small and Company Dry Goods organized the event. All businesses, including banks, closed, as well as all public schools.

All downtown store front windows displayed patriotic themes. Business owners unveiled their displays at 11 a.m. for judging. The Hines Band gave a concert at Fourth and Delaware Streets. Community singing and athletic contests took place until 2:20 p.m. Then, automobiles and civic organizations began a line of parade from the courthouse.

The Leavenworth JROTC participated in the parade.

“Nothing makes me prouder than to witness our community’s overwhelming support and admiration for our nations heroes,” states Rudy Klopfer, director and CEO of VA Eastern Kansas.

“Even during the unprecedented challenges of COVID-19, it’s the powerful moments such as this parade, that remind me of our never-ending responsibility to serve our Veterans.”