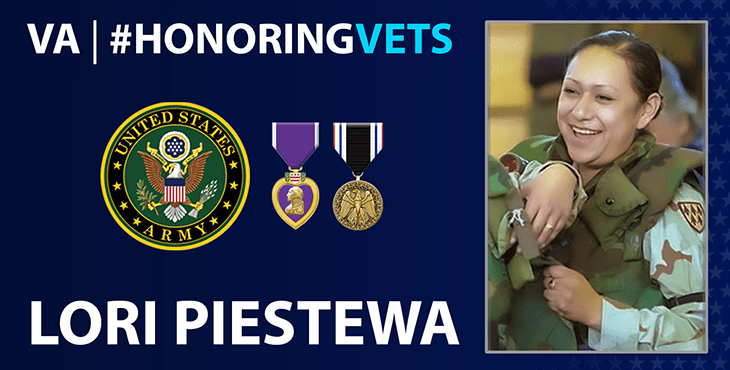 Lori Piestewa was born on December 14, 1981, in Tuba City, Arizona, a small town on the Navajo Indian Reservation in Coconino County. She grew up in a family that honored military service: her father served in Vietnam and her grandfather served in World War I.

Although she was a commanding officer in her high school’s Junior Reserve Officers’ Training Corps (JROTC) program, Piestewa enlisted in the Army a few years later, in October 2001 when she was 22.

Piestewa, a single mother of two, hoped to one day realize her goal of attaining a college degree. But in April 2003, she became the first Native American soldier and the first woman to die in the Iraq War.

Piestewa served with the Amy’s 507th Maintenance Company, a support unit that focused on maintenance and repair personnel. She and her company were driving through the desert when the convoy got lost; it was ambushed on March 23, 2003. Her Humvee weaved to evade gunfire when a rocket-propelled grenade (RPG) hit the left-front wheel, causing the vehicle to crash. She and a handful of personnel survived, but they were all taken prisoner. Piestewa specifically was sent to a hospital in Nasiriyah.

On April 1, 2003, U.S. Special Forces attempted to rescue the POWsWhen they didn’t recover her, she was declared MIA. Later, Special Forces discovered a mass shallow grave behind the hospital. A body there was positively identified as Lori Piestewa.

Since her death, the state government of Arizona renamed Squaw Peak in the Phoenix Mountains near Phoenix as Piestewa Peak. The freeway near this mountain was also re-named after her. The Grand Canyon State Games, a multi-sport Olympic Festival for Arizonans, renamed its annual event to the Lori Piestewa National Native American Games, an event that has attracted people from across the country. Multiple plaques dedicated in her honor, including at White Sands Missile Range in New Mexico; Fort Bliss, Texas; and at Mount Soledad Veterans Memorial in La Jolla, California. The American Indian College Fund established a college fund in her honor.

Piestewa was posthumously promoted from Private First Class to Specialist, and she also received the Purple Heart and the Prisoner of War Medal.

These are just some of the efforts to honor her service. For others, she’ll be remembered be as an icon for mothers, Native Americans and female soldiers.