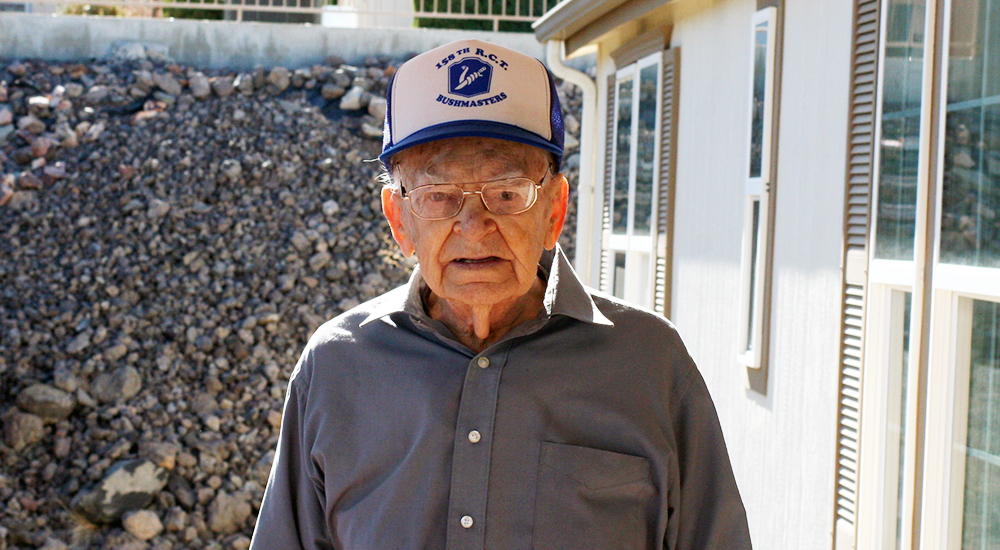 Zaczek (pictured above) had planned to go driving with a friend but began to feel unwell. He felt so sick that his friend insisted on taking him to the Emergency Department at the Northern Arizona Health Care System in Prescott, Arizona.

After testing positive for COVID-19, Zaczek was admitted to the hospital for treatment of his serious symptoms.

“The food was great, but I missed my home and my own bed. The nurses, doctors, and all the staff were absolutely professional and accommodating. They were so concerned and always made sure that I was comfortable and had everything I needed.”

Zaczek served in the Army from 1941 to 1945 as an infantry squad leader. Serving on the front line, he said that he remembers it like it was yesterday.

“I can clearly remember fighting against the Japanese. They opened up with a machine gun on my squad. The guy next to me was shot and I pulled him out of the line of fire and did what I could until the medics arrived.”

That soldier, Paul Welsh, caught up with Zaczek years later to say thank you for saving his life.

During WWII, Zaczek also served in the Panama Canal, Australia, New Guinea, the Philippines and finally Germany. When his company was deployed to the Philippines, they were ordered to climb a mountain and overtake an enemy’s position. Zaczek remembers it was a huge mountain, but his team completed the mission and saved a nearby village. His unit received a Presidential Citation for their actions.

Born during the Spanish Influenza, Zaczek was cared for by his brother while his parents were at work. He’s been told that one day, he became feverish and his brother was so alarmed that he took him to a local doctor for help.

Just like then, Zaczek has now recovered from a serious illness and returned home.

“I am finally feeling back to myself. Lying in bed for five days takes a toll on you, and now I want to get back to normal.”

Zaczek’s daughter, who lives in Maryland, calls every day to check-in. He’s looking forward to traveling around Arizona with his friend. He says they have plans to go to Thumb Butte and Sedona.

“Milton has given me hope,” said Dr. Kara Johnson, Zaczek’s primary care provider. “He lived through the Spanish Influenza, WWII, COVID-19 and he still has such a positive attitude. He has helped me to see we all can push through and live our lives.”