A civics lesson in socks 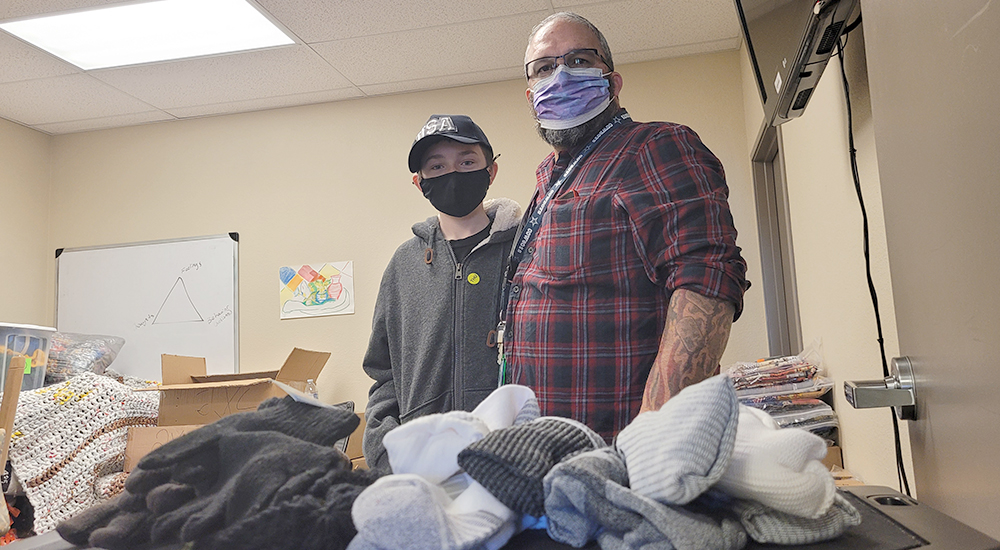 Regardless of the year, the community surrounding VA Sierra Nevada Health Care Systems consistently contributes to our Veterans. Individuals and organizations find innumerable ways to give back to America’s heroes, even during the coronavirus pandemic.

The only thing that might be more beautiful to witness than our community coming together to give to Veterans in need is the inspiration sparked in our younger generation when they witness such kind acts.

Dylan Barbour, a student at Sky Ranch Middle School, is one such member of that younger generation. On November 22, full of zeal, he stood next to his father in the VA Capitol Hill building, a facility that provides healthcare and vocational rehabilitation for homeless Veterans in Reno, Nevada.

Stacked around Dylan were socks – lots of socks. Hundreds of socks, in fact. There were also jackets, gloves and other crucial articles of winter clothing in piles nearby. But the socks. For Barbour, the socks represented overcoming hurdles, something he had collected and could personally hand out to Veterans.

“Giving something to someone is more joyful than being given something,” he said.

A project to teach the importance of giving

Like many good civic lessons, the journey to that November day at Capitol Hill started in school. Barbour’s social studies class was assigned to “Be the Change,” a project designed to teach students the importance of giving to those in need. Barbour received a list of worthy causes to which he could contribute.

The pandemic had Dylan looking for options.

But Barbour already had an idea of who he wanted to give back to. His father, Steven Barbour, has for the past five years worked at the Reno VA, helping homeless Veterans. When the opportunity to give arose, Dylan knew he wanted to contribute to Veterans. Like father, like son.

Socks are a commonly needed item for our homeless Veterans. They’re easily worn out and thus often requested. Having learned this from his father, the young Barbour decided to organize a sock drive.

As he began putting together plans for the sock drive, Barbour’s school began implementing COVID-19 restrictions. Logistically, there was no possible avenue for him to hold an actual sock drive at his school. He had to pivot to find another solution.

Pandemic had Dylan looking for options

In the face of a pandemic, Barbour scoured his options. He eventually found a local organization, Wild Whimsical Women, who helped him collect close to 400 pairs of socks. Throughout the process, the elder Barbour encouraged his son to seek alternative paths, while offering suggestions when needed and acting as Dylan’s voice of experience.

“As his dad, it makes me and his mom super proud of him for always looking out for others and wanting to help when and where he can,” Steven said, with a gleam in his eye.

It’s been said that charity begins at home. True enough. Taking care of one’s family is a priority. But it’s also fair to say that the act of charity extends outward, like positive ripples of compassion spreading across a community pond, inspiring others, perhaps none more important than the younger generation.

As Dylan stood next to his father passing out socks (pictured above), a smile greeted each Veteran – and a smile was returned. For Dylan, the lesson in civics was complete. For now.