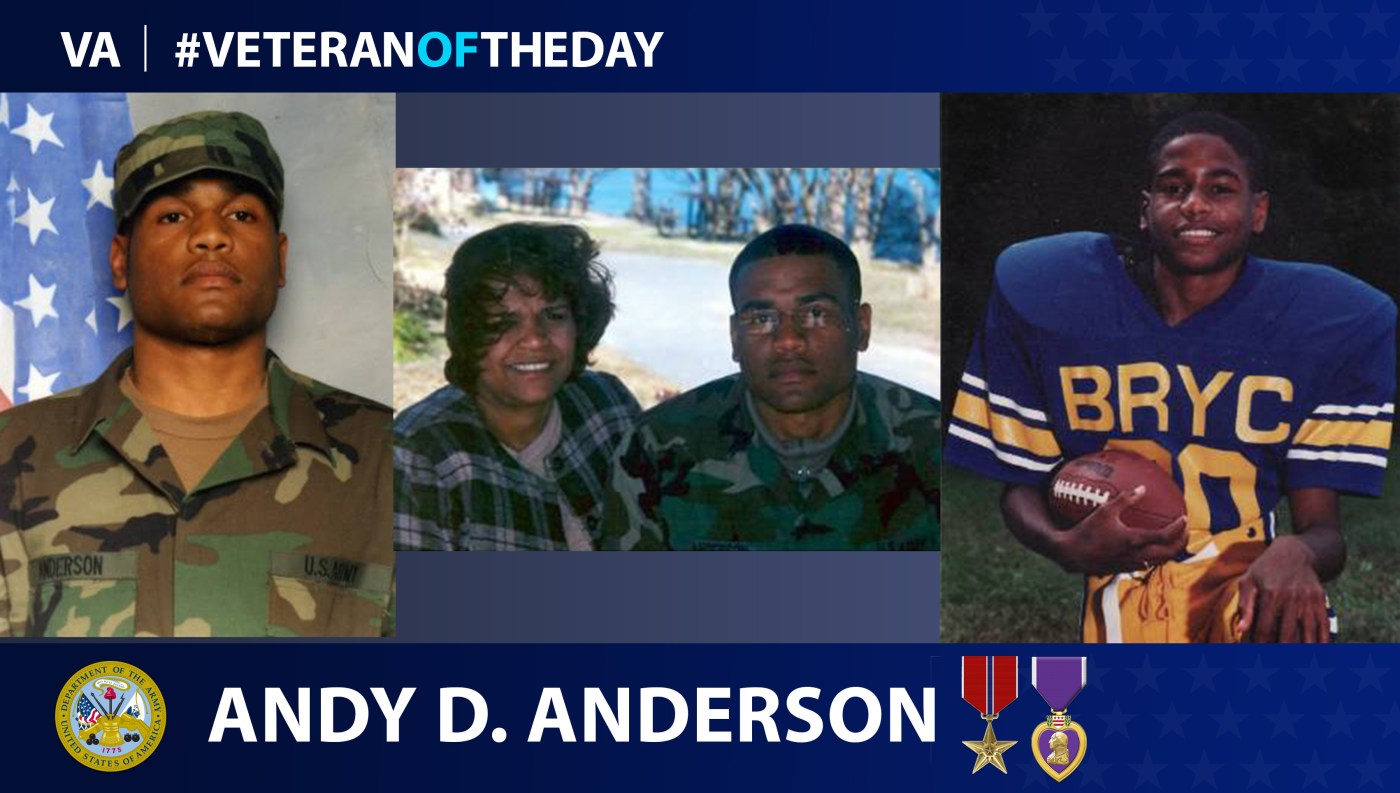 During National Black History Month, today’s #VeteranOfTheDay is Army Veteran Andy D. Anderson, who was killed in action in Iraq.

Andy D. Anderson was born in March 1982 in Tacoma, Washington. He grew up in Falls Church, Virginia, and attended J.E.B. Stuart High School. He excelled in football and basketball, making both varsity teams in his sophomore year. Anderson graduated from high school in 2001 and attended Shenandoah University in Winchester, Virginia, for a year before joining the Army in November 2002.

Anderson attended basic training in Fort Jackson, South Carolina. He then went to Gulfport, Mississippi, for advanced individual training as a carpentry and masonry specialist. He served with B Company, 46th Engineer Battalion, Fort Rucker, Alabama. Anderson’s unit supported initiatives throughout the country. He worked on assignments including building a rappel tower for the University of Southern Florida’s Reserve Officers’ Training Corps program and working with the U.S. Border Patrol in Douglas, Arizona.

In October 2005, Anderson deployed to Iraq with the 46th Engineer Battalion in support of Operation Iraqi Freedom. While in Iraq, he renovated housing for coalition and Iraqi security forces. Anderson also trained as a M203 gunner. Two months after he deployed, he promoted to corporal.

In the spring of 2006, Anderson returned home on leave and proposed to his high school sweetheart and best friend since middle school. The couple planned to get married when he finished his tour in October of that year.

About a month later, on June 6, 2006, Anderson was building barracks on his base in Ramadi. It was near the end of the workday, when the construction site came under attack by mortar fire. Anderson and another soldier from his unit died during the attack.

In a memorial to his brother, Rafael Anderson remembered that last visit home, “That’s where he found his calling… He just reenlisted for four more years. He told us he’d stay for 20. You could just tell looking into his eyes. . . he was real fulfilled.”

Anderson earned numerous medals including a Bronze Star and Purple Heart. He was 24 years old when he died. Anderson is buried at Arlington National Cemetery.