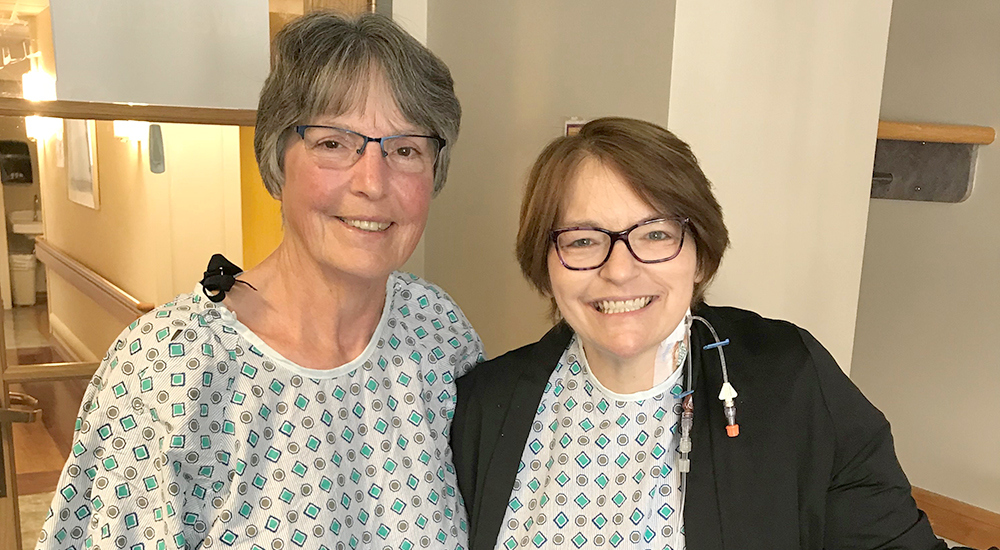 As a former chief hospital corpsman in the Navy, I didn’t expect to be on the receiving end of care. I was healthy my entire life. Never in a million years did I think my kidneys would fail me, leaving my body desperately needing a transplant from a stranger. But these earth-shattering surprises did occur, not only to me, but also to my husband.

In the blink of an eye, Thom and I went from a vibrant couple, living a very active lifestyle, to having little to no energy to complete simple tasks, like grocery shopping and doing laundry.

Thom and I dedicated our lives to the Navy, working at Camp Lejeune in North Carolina for many years. Years after we left the base, people began developing health issues that were later connected to toxic chemicals they unknowingly had been exposed to.

People often say, “When it rains, it pours.” For Thom and me, that phrase holds true when describing our lives. In 2015, we were stunned when Thom learned he had permanent kidney damage. Thom was also in the medical field and lived a healthy lifestyle. After receiving the news, he researched how to maintain a kidney friendly diet and slow the progression of his kidney disease, which he did.

Diabetes one reason for kidney failure

Just three years after Thom’s diagnosis, our world came crashing down when I was rushed to the hospital. My kidneys had failed, which meant I needed to start dialysis immediately. I was later told that my failure was caused by multiple medical conditions, especially diabetes.

Diabetes is the leading cause of the disease and one in three Americans with diabetes also has kidney disease.

I thought I was educated on everything related to my health. I felt blindsided and betrayed by my body when I suddenly had to have dialysis treatments three days a week to survive. Thankfully, I was able to receive a kidney transplant just a couple months after starting dialysis. That isn’t common. To this day, my transplant is one of the biggest blessings in my life.

In the photo above, Candie Gagne (author) is on the right with her kidney donor, Carol Messe, on the left.

Our kidney disease journey continued when Thom’s kidneys failed just five short months after I received my transplant. We felt absolutely defeated. It’s still baffling to us that Thom’s kidneys failed. He took extremely good care of his kidneys through diet and exercise once he was diagnosed.

It also was a shock that we both crashed into dialysis. I had a kidney transplant and Thom is still waiting for his, all within the last five years. It turns out, though, our situation is not all that shocking – one in six Veterans has kidney disease.

I can’t say enough that you should be your biggest advocate for your own health. It’s so important to educate yourself so you are as prepared as possible for the curve balls life throws your way. Thom and I have relied heavily on resources from the American Kidney Fund (AKF) because they have information that is easy to understand, from guides on how to talk to your doctor to quizzes to help test your kidney knowledge.

AKF’s Know Your Kidneys campaign is especially helpful for anyone facing kidney disease.

Learned from conversations with care team

I was always comfortable speaking with my doctors, since I’ve been in the medical field most of my life. I’ve been using AKF’s talk to your doctor guides to have conversations with my care team about my kidneys. It wasn’t until then that I learned about the connection between kidney health, diabetes, and high blood pressure. High blood pressure is the second leading cause of kidney disease.

I did endless research and read through AKF’s website so I can advocate for my health which is why I’m here today with a transplant and am getting better one day at a time. We must be active participants in our own health to ensure life’s curve balls don’t strike us out.

VA and the American Kidney Fund have entered into a partnership to help Veterans lead healthier lives, supporting Veterans through early identification of the disease and referral for appropriate treatment. The partnership is managed by VHA’s Office of Community Engagement.