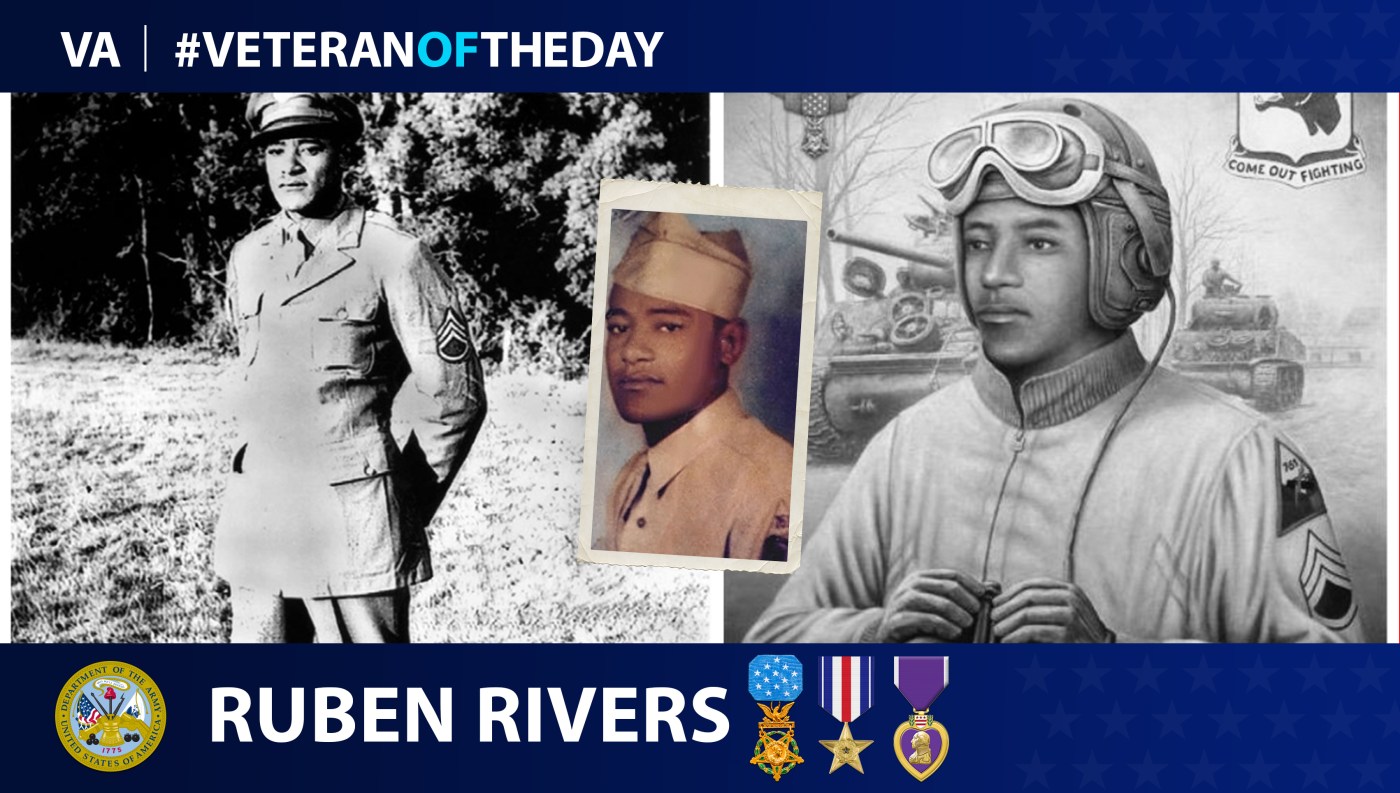 During National Black History Month, today’s #VeteranOfTheDay is Army Veteran Ruben Rivers, who received a Medal of Honor for actions in WWII.

Ruben Rivers was born in 1918 in Tecumseh, Oklahoma. He lived nearby and worked on a farm where he lived with his parents and 11 siblings. After Rivers graduated from high school, he had a job with a railroad before he enlisted in the Army in 1942.

Rivers trained with a tank battalion at Camp Hood, Texas, now known as Fort Hood. Due to segregation in the military at the time, he served in an all-black unit. This unit formed Company A, 761st Tank Battalion, later known as the “Black Panthers.” The 761st was one of the best units in stateside service. Gen. Ben Lear reviewed the unit and declared them combat ready. At this point, Rivers had made the rank of staff sergeant and commanded a tank platoon upon deployment.

The unit arrived in England in 1944. Upon hearing excellent reviews, Gen. George S. Patton requested the unit for the Third Army. Rivers and the rest of his battalion transferred to France in October 1944, where they joined the 26th Infantry Division.

In early November 1944, the 761st advanced toward the Siegfried Line as part of the Saar Campaign. While attacking with infantry, Rivers and his tank encountered intense enemy fire. Rivers quickly dismounted from his lead tank to help infantry direct their fire, which put him at great risk. He also manually cleared a roadblock that was holding the tanks up.

Less than two weeks later, Rivers was again in heavy combat that lasted several days. While advancing on German positions in Guebling, France, a mine hit and disabled Rivers’ tank. Despite severe wounds, Rivers refused evacuation or medical treatment. Instead, he took command of a different tank within the platoon, which was under Rivers’ overall command. The platoon suffered considerable losses, but Rivers and his tank pressed on. In these actions, Rivers and his men helped secure the village of Guebling.

The unit continued and encountered decidedly stiff enemy anti-tank fire. Despite being ordered to retreat, Rivers told his commander he had spotted the German tanks that had been firing on the advancing Americans. Rivers began to fire at the Germans, which allowed the men of his unit to retreat successfully. Rivers was killed in action Nov. 19, 1944, as the Germans destroyed his tank.

Despite his commander’s recommendation for a Medal of Honor, he did not receive it due to his race. He posthumously received a Medal of Honor in 1997, 53 years after his death. In addition, Rivers received a Silver Star and Purple Heart. He is buried in Lorraine American Cemetery in France.