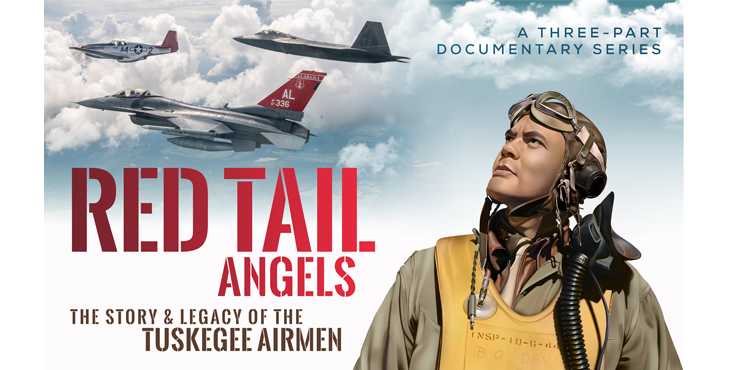 Black History Month is a chance to celebrate and honor Black Americans who trailblazed paths for future generations. Among those trailblazers are the Tuskegee Airmen.

Episode 1 dives into the history of the 16,000 men and women who became pilots, mechanics and support Airmen. An Army War College study said Blacks should not work in technical jobs, which was used to discriminate against them. President Franklin D. Roosevelt signed Public Law 18 April 3, 1939, which mandated the Army Air Corps expand its civilian pilot training program to Black colleges, paving the way for Black citizens to serve. Due to the need for pilots – and lobbying from Tuskegee Institute (now Tuskegee University) President Dr. Frederick Patterson – Black pilots started training.

Air Force Veteran Charles McGee said Tuskegee Airmen could’ve given up because of discrimination, but they didn’t because “that’s not the American way.”

Air Force Veteran Charlynda Scales said she escorted a Tuskegee Airman who gave her advice on the legacy of Black service members.

“To listen to him talk about it and to tell me that uniform you wear, there are so many people that have sacrificed and lost their lives and paved the way for this to happen and to not take that lightly,” she said. “He was a part of the village that raised me as a service member and now as a Veteran.”

Although operational, the 99th Fighter Squadron didn’t get into the war immediately. That changed when Col. Noel Parrish went to Washington.

Episode 2 tells about Air Force Veteran Benjamin O. Davis, a 1936 West Point graduate. Davis applied to flight training, but did not receive a slot because of the military’s discrimination toward Black officers. Instead, he became one of the first five Tuskegee pilot graduates in March 1942.

“He was one of the finest men I’ve ever met in my life,” Air Force Veteran Harold Brown said. “The fact that we were as successful as we were, he really prepared us for that transition.”

Davis led the 99th Pursuit Squadron into their first deployment. Flying Curtis P-40 Warhawks, they attached to the all-white 33rd Fighter Group at Fordjouna, Tunisia, in spring 1943. On June 2, 1943, the 99th saw its first combat as the Allies secured the Italian island of Pantellaria. On July 2, the unit scored its first aerial victory against the Luftwaffe when 1st Lt. Charles B. Hall shot down a Focke-Wulf Fw 190 on his eighth mission. He was the first Black pilot to shoot down an enemy aircraft.

Despite its early success, Davis had to justify the continued existence of the 99th. After fending off attacks from military leaders, the pilots started flying bomber escort missions under 15th Air Force.

When Davis briefed pilots, he told them to stay with the bombers and never leave, Brown said. Instead of chasing personal accolades, the 99th protected bomber crews, which carried 12-15 men aboard. Bomber crews started requesting the 99th, known as the Red Tail Angels, due to the distinctive color on their tails.

In the final episode, the 477th Bombardment Group fought against racism at home in the Freeman Field Mutiny in Indiana. Unable to use clubs, swimming pools or movie theaters, 101 Black officers attempted to enter the Officers Club. They faced punishment ranging from written reprimands to death by firing squad.

Despite fighting two wars against the Germans and racism, Tuskegee Airmen posted an impressive record. They flew 312 missions for 15th Air Force, 179 of these bomber escort missions. Only seven missions suffered losses, with 27 bombers shot down. In comparison, other units had an average 46. They also scored 112 aerial victories, with three pilots shooting down four aircraft each, one short of ace status.

Returning back to the U.S., these Veterans did not receive the same level of respect as other combat Veterans. Instead, they returned to segregation. However, they paved the path for future generation of Black military members.

Decades after blazing the path, the group received a Congressional Gold Medal. The vote in the House and Senate was unanimous.

“It’s not often you get the chance to meet the guys who have paved the path for you,” said then-President George W. Bush, himself an Air Force Veteran. “The Tuskegee Airmen helped win a war, and you helped change our nation for the better. Yours is the story of the human spirit, and it ends like all great stories do, with wisdom and lessons and hope for tomorrow. And, the medal that we confer today means that we’re doing a small part to ensure that your story will be told and honored for generations to come.”

Bush ended his speech by offering a salute to the Tuskegee Airmen for their bravery.