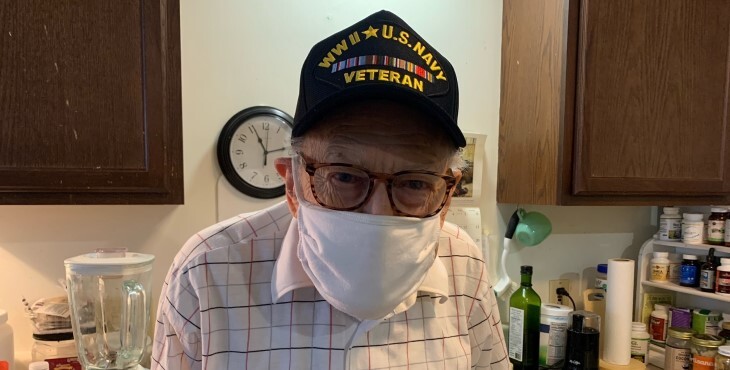 In 2019, a 94-year-old man checked himself into the Buffalo City Mission with nothing but a cellphone, the clothes on his back and his red walker, which he called his “red corvette.” Two years later, WWII Navy Veteran Hobart Balaton has a place to call his own, thanks to VA – in particular, the caring staff at the VA Western New York Healthcare System and the Housing and Urban Development-VA Supportive Housing (HUD-VASH) program.

Balaton, a former professional trombone player, was greatly influenced by his time in the service and always searched for ways he could give back.

“I was a different person when I went into the Navy,” said Balaton. “When I left the service and connected with Veteran organizations, it brought a whole new perspective to my life. I wish I could go back [to the service] now.”

When he arrived at the mission, Balaton had been living in his Buffalo, New York, apartment for over 10 years, working as a custodian and spending his free time as a volunteer food pantry truck driver. But due to ongoing conflicts with his landlord, Balaton no longer felt safe living there. He found his way to the city mission, where he was quickly connected with Kristen Weese, a program manager for the Health Care for Homeless Veterans (HCHV) program. Eventually, he met his HUD-VASH case manager, Kevin Quiambao, who picked him up every week to run errands and search for a new apartment.

“He didn’t come across as discouraged, down on his luck, or needy,” said Quiambao. “He didn’t ask me for anything, and he definitely didn’t seem 94-years old. He was energetic, motivated, and either carefree or oblivious to any obstacles in his path. He pushed forward, and I was the one who had to keep up.”

After a month at the city mission, Balaton used a HUD-VASH voucher to move into an apartment for senior residents and was assigned a new HUD-VASH case manager, Craig Voigt. Balaton was adamant about collecting his belongings from his previous apartment and cleaning the place up for the landlord. So, at 94, Balaton rented a U-Haul truck and moved everything on his own.

“Every case worker should be so lucky as to have a Mr. Balaton on their case load,” said Voigt. “He is an inspiration, and his perseverance, kind heart, and never-give-up attitude are infectious.”

Accompanied by Voigt, Balaton recently visited his local VA medical center to receive a COVID-19 vaccine in what he described as a “very smooth process.”

“I am thankful for all of the staff at VA – they are all truly wonderful,” said Balaton. “Once you leave the military, take the time to find your purpose in life.”