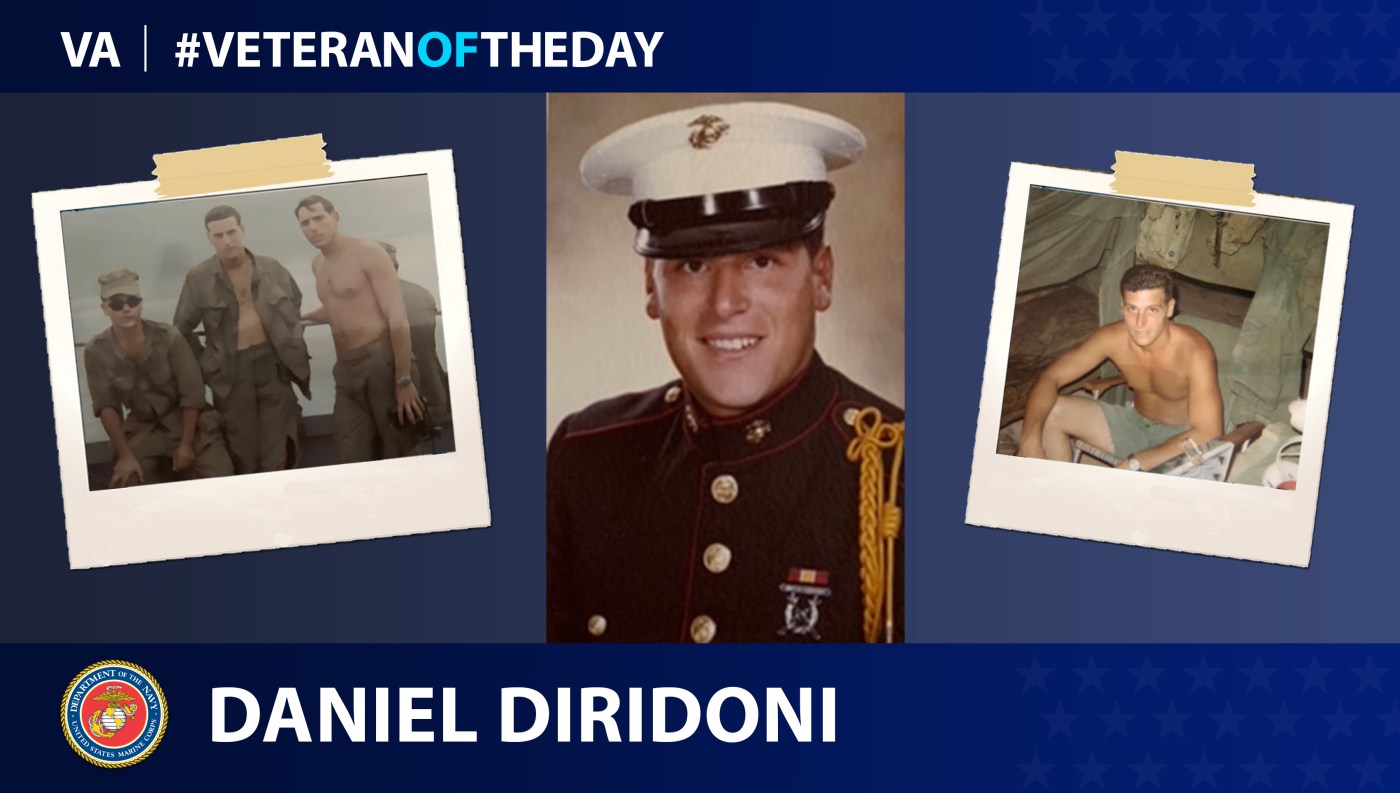 Today’s #VeteranOfTheDay is Marine Corps Veteran Daniel Diridoni, who served as a water purification specialist during the Vietnam War.

Daniel Diridoni graduated from Junipero Serra High School in San Mateo, California, in 1965. After attending one semester of junior college, he enlisted in the Marine Corps at age 19 in 1966. Diridoni joined the Marines as part of the buddy program, which allowed him and his best friend to enlist together and then attend recruit training at the same time and in the same platoon.

After completing basic training, he attended infantry training at Camp Pendleton in California in November 1966. Diridoni then went to Camp Lejeune to receive training on different water purification techniques and equipment. After finishing training, he went back to Camp Pendleton in March 1967 with the 13th Engineer Battalion for one month. There, he received his assignment for Vietnam as a combat engineer with the 9th Engineer Battalion of the 1st Marine Division.

Diridoni spent 13 months in Vietnam. He built, repaired and maintained buildings, roads and power supplies. During his time in Vietnam, Diridoni served in a service company, where his military occupation specialty was water purification. Diridoni worked to purify water for the troops with his “water buffalo.”

After arriving in Chu Lai, he joined B Company to build roads near Hue City. Diridoni arrived in Hue City and remained there when the Tet Offensive began with the Battle of Hue on Jan. 31, 1968.

When the Tet Offensive ended in March, Diridoni went to Landing Zone Sally, the staging area for the 101st Airborne. He left the base camp every day with his water purifying equipment and spend the day making sure the water was safe for drinking. Diridoni also served at Firebase Bastogne in the A Shau Valley before returning to Phu Bai and rejoining B Company to help with their work around Camp Eagle. In October 1968, he went back to Chu Lai.

In 1969, Diridoni returned home to California and left the Marine Corps. A year later, he married his wife after writing her many letters while in the service.

Diridoni enrolled in college, and after receiving his degree, he worked as a probation officer. He soon found his passion for restoring cars and opened a body shop in 1988. Diridoni and his wife ran Evelyn Auto Body together in Mountain View, California, for 20 years before he retired in 2009.

Today, Diridoni loves dogs and camping. He also enjoys riding his Harley motorcycle and spending time in the mountains. He has two daughters and four grandchildren.