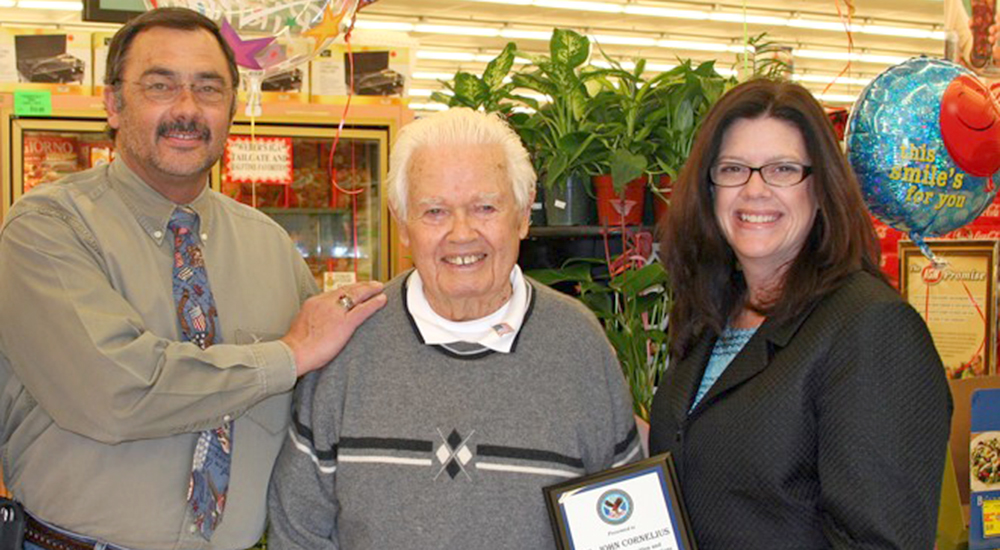 John Cornelius believed we should always honor our Veterans for their commitment and sacrifices. Cornelius was an Army WWII Veteran who earned two Bronze Stars. He began a fundraiser over 15 years ago for hospitalized Veterans of Northern Arizona when he was 87 years old.

That fundraiser continues to this day.

“Through the years, the money has been donated to our health care system. As a result, we’ve been able to purchase items for inpatient Veterans to help make their lives more comfortable,” said Paul Flack, voluntary service assistant, Northern Arizona VA Health Care System.

“Some of the items purchased are welcome kits, newspapers, prepaid phone cards, flowers, get well cards and special items that can be used for Veterans birthdays,” Flack said.

Cornelius points out battle map from his service in World War II.

Cornelius (center) is pictured above in 2016 with Jake Weber and Wendy Hepner. Weber owned a local IGA grocery store; Hepner is a former hospital associate director.

Multiple news articles have published through the years about Cornelius and his contributions to help fellow Veterans. At the time of his passing on April 5, 2017, just a few days shy of his 99th birthday, he had raised more than $200,000 for Veterans.

“Honored to have known John”

The annual raffle begins every year on Dec. 7 (Pearl Harbor Remembrance). The 2020 raffle brought in $13,000 to the Prescott VA Medical Center.

“Our health care system is honored to have known John and had the opportunity to work with him and his cause,” said Carol Lynn Powell, a volunteer at Northern Arizona VA Health Care System. “We are honored to see the results of his efforts continue to live on for so many years.”

It’s unusual to find someone as charitable as Cornelius. He started fundraising at age 87 and made it a priority until his passing at age 98.

To say that Cornelius has been successful in his efforts is an understatement. “We have seen the benefits of his efforts live on with the donations made to our medical center in his honor,” said Flack.

A former VA Secretary stated in a February 2016 letter written to Cornelius before his passing: “You are indeed a great American hero. You have touched so many through your service to our nation and your devotion to our community.”