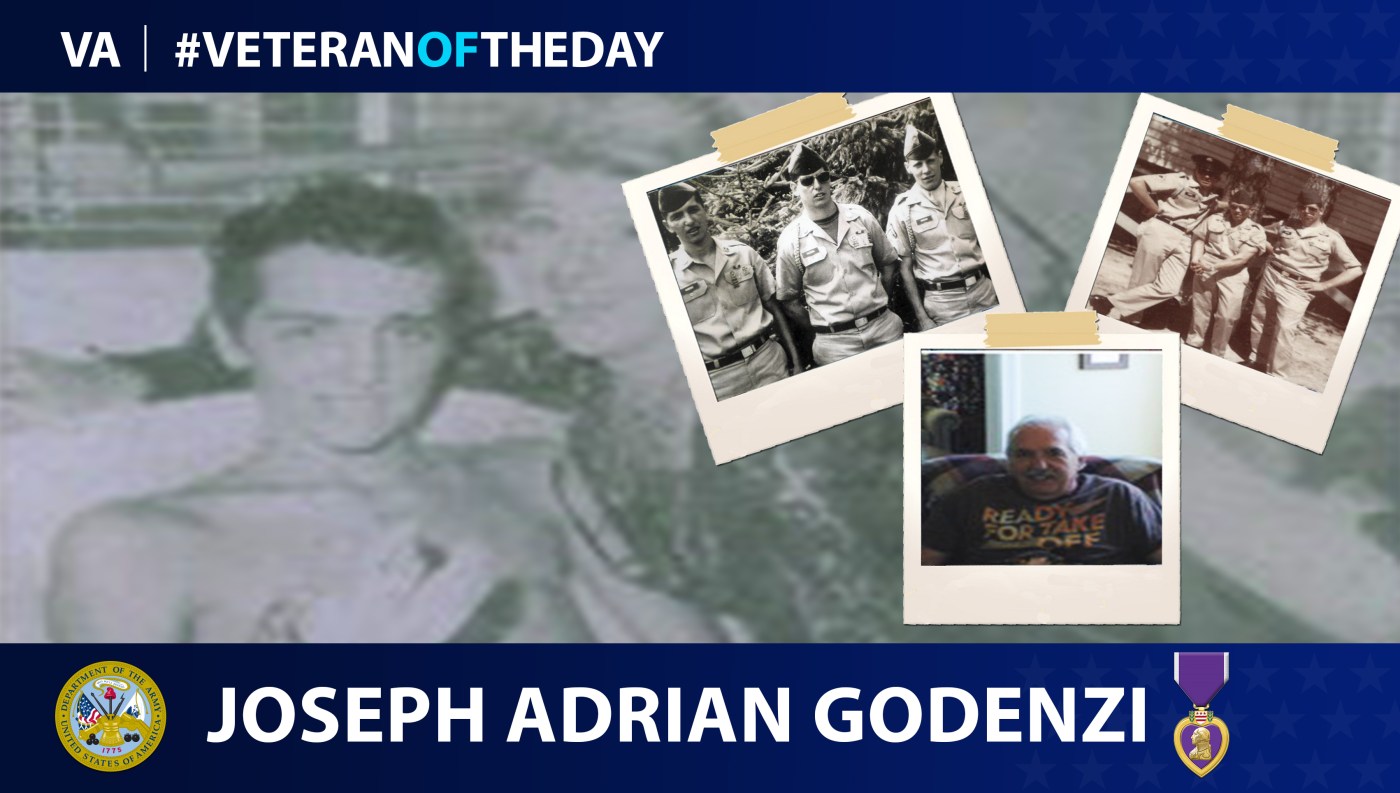 Today’s #VeteranOfTheDay is Army Veteran Joseph Adrian Godenzi, who served during the Vietnam War and received a Purple Heart.

He reported to Fort Dix, New Jersey, Feb. 20, 1968 for basic training. Godenzi’s high school football experiences helped him to endure the difficult physical training. He earned a perfect score on his physical training test— the only person in his battalion to accomplish this feat.

Following his graduation from basic training, Godenzi went to Fort Polk in Louisiana for 10 weeks to complete advanced infantry training in preparation for Vietnam combat. Godenzi learned jungle navigation and warfare techniques in the snake-filled Louisiana swamp lands. While there, he specifically learned to “search and destroy” using various explosives and weapons.

Godenzi deployed to Cam Ranh, Vietnam. He then travelled to Pleiku near the Cambodian border, which was the 4th Infantry Division’s home base. After a week at Pleiku, he moved to a special forces camp near Bambi Tuit, where he ran missions out of the perimeter. His company protected the small supply trails coming through Cambodia and into Vietnam throughout August and early September of 1968.

On Sept. 25, 1968, Godenzi received multiple injuries during a fire fight. First, shrapnel from the company’s artillery hit him in the back. Then, when an enemy threw a grenade into his foxhole, Godenzi grabbed it and threw it out of the hole, resulting in the loss of his thumb and one of his fingers. After several hours, the fighting ceased, and helicopters removed him from the area. Godenzi received 252 stitches and later had his hand reconstructed. A bout of malaria postponed his return home to the United States.

Eventually, he shipped out of Vietnam for rehabilitation at Fort Devens, Massachusetts, then later at Walter Reed Army Medical Center in Washington, D.C., before discharge April 4, 1969, as a specialist four.

“I’m extremely proud of the guys and the women that are part of the military,” said Godenzi in a 2011 interview for the Veterans History Project. “No matter how simple their job, everybody that’s in the military is a hero to me. They deserve every accolade they get.”

After his service, Godenzi went to college and studied accounting before eventually working 31 years for the U.S. Postal Service. His military service changed his life and forced him to learn how to do everything physical differently.

“Physically, [my military service] totally affected my life. It changed everything,” Godenzi said in his interview. “I was always right-handed. Now I’m left-handed. Mentally, I’ve never had a problem with it once I got over the hump that this is me. There ain’t nothing going to change it. I’m never going to get my hand back. I’m never going to get that time back, you know, deal with it. And that’s what I did.”