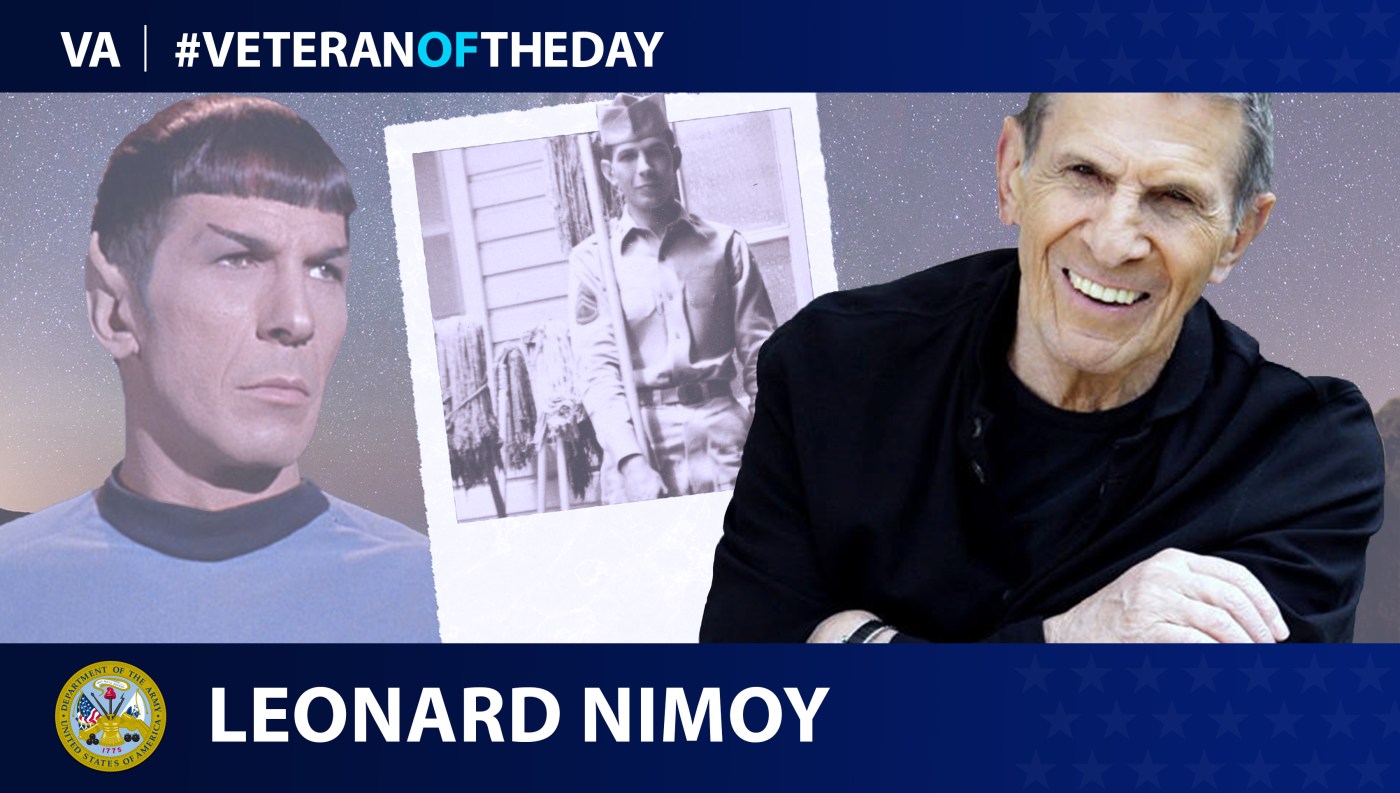 On the 55th anniversary of the premiere of Star Trek, today’s #VeteranOfTheDay is Army Veteran Leonard Nimoy, who played Mr. Spock in the series.

Leonard Nimoy was born in 1931 in Boston, Massachusetts, to two Jewish immigrants who escaped the Soviet Union. At a young age, Nimoy was transfixed with acting and made his first appearance in a play at 8. He continued his studies as an actor through his teenage years, and attended Boston’s English High School. Despite his dedication to acting, Nimoy’s parents did not agree with his career choice, especially his father. Nevertheless, Nimoy knew his parents wanted him to attend college and he saw it as an opportunity to further his acting career. After graduating high school in 1949, Nimoy enrolled in Boston College.

Nimoy enjoyed college, but he wanted to chase his dream of becoming an actor. During his time in college, he played the role of Ralphie in a collegiate production of Clifford Odets’ “Awake and Sing.” During this time, Nimoy was torn between school and acting. He sought career advice from one of the cast members of another Clifford Odets production at a pre-Broadway debut show in Boston. The meeting gave Nimoy the clarity he needed to leave college and submit an application to California’s Pasadena Playhouse. He moved out West with the money he saved from selling vacuum cleaners.

Nimoy landed a couple of minor roles from 1950 to 1952, but when money became tight and there was a lack of opportunity, he joined the Army to earn a steady income. He served 18 months at Fort Ord, California, followed by service in Georgia at Fort Benning and Fort McPherson. Nimoy served in the Special Services Division, a branch of the military solely created for entertainment. It was formed in July 1940 to encourage soldiers with talents in acting, music and writing to provide entertainment to their comrades. The Army further encouraged Nimoy to become an actor by supporting his dream.

Between 1953 and 1955, Nimoy acted in a variety of roles. In one role, he portrayed a young soldier with post-traumatic stress disorder in “Combat Psychiatry—The Division Psychiatrist,” commissioned in 1954 by the U.S. Marine Corps.

Nimoy left the service in 1955 as a technician third class, but his military service followed him and he continued to play numerous soldiers. In 1964, he guest starred on “The Lieutenant,” which changed his life. While the show itself only lasted one season, it was creator Gene Roddenberry’s first show, and he was working on what would later become “Star Trek.” Roddenberry took one look at Nimoy and knew immediately that he would make a perfect alien. Two years later, in September 1966, Nimoy found himself playing Spock, a Vulcan science officer, and his acting career took off. The Army ultimately provided Spock to the world.