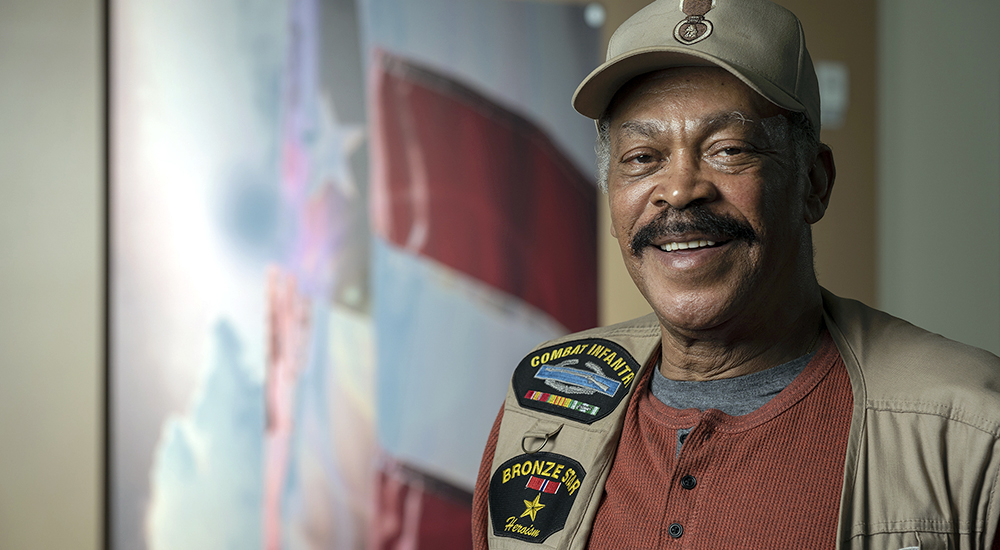 Billingslea grew up in a mixed neighborhood of Detroit in the 1950s. The oldest of six children, he remembers a simple, but comfortable life.

He was drafted in 1966. “Military service was just something that happened in our family,” he said. “I had eight uncles and a father who served in the military. Four served during WWII and one served in Korea. When my name came up in the draft, I considered it my turn.”

Billingslea’s first assignment was with A company, 2nd Battalion, in the 173rd Airborne Brigade (Separate), and by February 1967, he was part of the only combat parachute jump of the Vietnam War.

“Nobody from my company got hit during the jump, but one guy got stuck in a tree and had to be pulled out by helicopter,” he said.

“They patched me up and I went right back out”

“I was hit by enemy fire twice that spring,” he continued. “Once on right forearm and once in the knee. They patched me up and I went right back out.”

Billingslea was next sent to Dak-To in the central highlands during Operation Greeley. Company A was emplaced near Hill 1338 during the battle on June 22. “’The Battle of the Slopes’ was a very long day. Our company lost 79 men that day and another 23 were wounded. I made it through and was awarded the Bronze Star for Valor. It was completely unexpected,” he remembered.

Billingslea returned to duty on July 9, but was injured again: “We were entrenched on a hill and received mortar fire. Our foxhole got hit and shrapnel tore up my left arm. They transported me out and, just like that, I was headed back to the States,” he remarked.

He spent nine months rehabilitating at Valley Forge hospital in Pennsylvania and had his first experience with anti-war protestors. “There I was in uniform with my arm in a cast and a protester spit on me,” he recalled. “I would’ve been arrested for defending myself if a couple of witnesses hadn’t interceded with the police.”

Billingslea went back home to Detroit in the fall of 1967, found a job and eventually went to college. He was able to play basketball again in the summer leagues, and even played against the Detroit Pistons. Because of their military history, the Billingslea family was always supportive, and understood what it meant to carry on after combat. Billingslea eventually married and had two girls and two boys.

He visited the Vietnam Memorial in Washington D.C. once and it had an emotional effect on him. “I put off going to see the names of my buddies on that wall,” he said. “When I did finally go it was raining and the wall looked like it was crying.

“Seeing each name on that wall brought me back to a moment I spent with each one. Memories of guys I hadn’t even thought of were pouring out of the wall.”

Billingslea now volunteers for Vet-2-Vet and the West Michigan Veterans Assistance Program. He spends a lot of time with his nine grandchildren and three great-grandchildren, coaching them in basketball.

He still attends reunions with the 18 surviving members of Company A and says that staying busy is crucial. “No matter what you go through in life, you’ve got to hang in there, find some comrades and talk with them, face-to-face or on the phone,” he said. “You may want to put your military service behind you, but you need to get out every day and do something or those memories will catch back up to you.”

We owe a great deal of gratitude to our Veterans, and as we celebrate National Vietnam War Veterans Day, we’d like to tell Billingslea and our other Vietnam Veterans “Welcome Home.”

Adam V. Swager is a public affairs specialist with the Battle Creek VAMC.