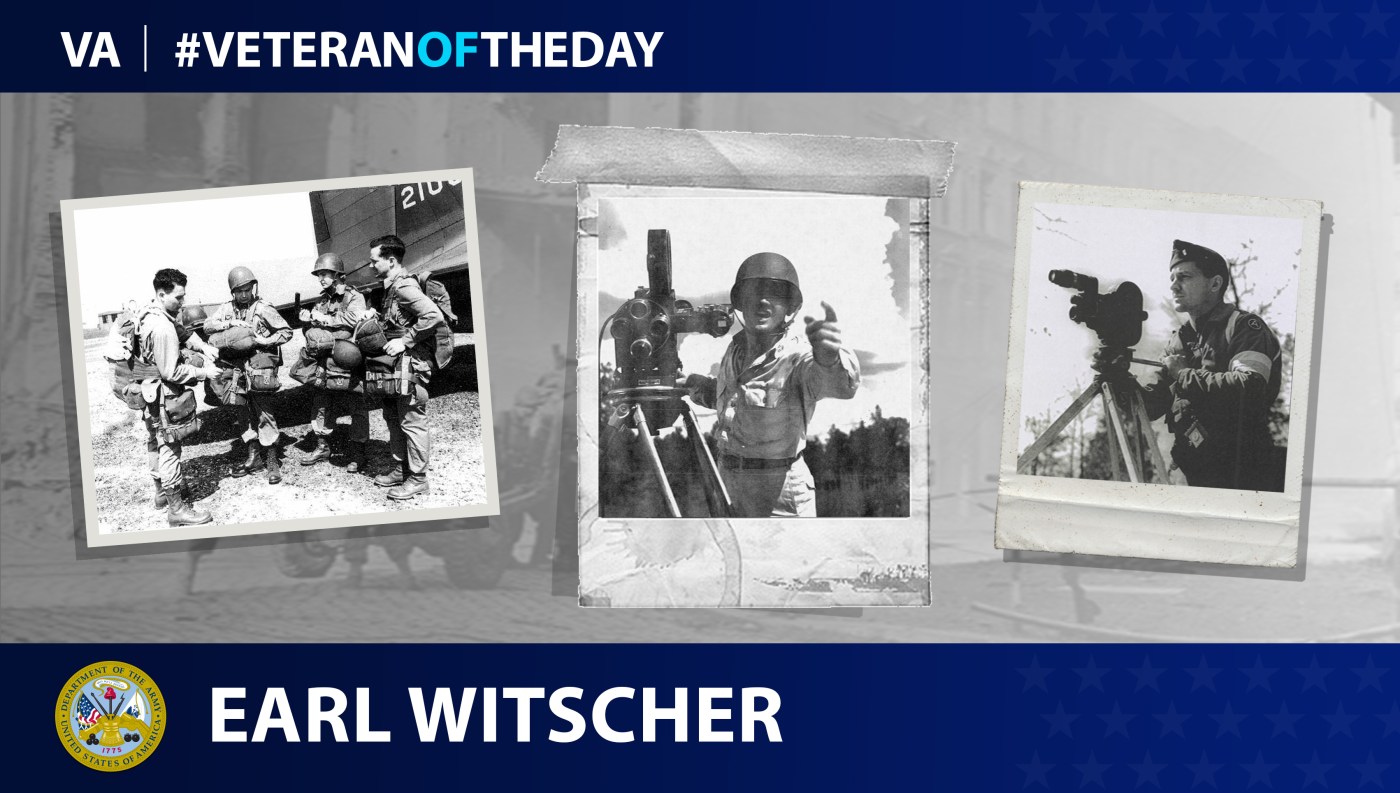 Today’s #VeteranOfTheDay is Army Veteran Earl Walter Witscher, who served during World War II as a photographer with the 165th Signal Photo Company.

Earl Walter Witscher joined the Army as enlisted before completing officer candidate school Oct. 16, 1942. Stationed at Fort Sam Houston, Texas, he frequently traveled elsewhere to document various goings on in photographs and film. In January 1944, Witscher went to Canada with the 1st Canadian Corps on temporary duty to produce a training film. A short time after that he traveled to Europe and World War II.

After training with the 82nd Airborne in England, Witscher and his photo company airdropped onto Normandy. Several members of their company were injured or lost their lives that day, including their commanding officer, who lost his leg on the beach. Witscher ended up in a firefight and had to bury all of his equipment before possible capture.

Just three weeks after D-Day, Witscher received a letter of commendation from the Headquarters of the 82d Airborne Division and Maj. Gen. M.B. Ridgway, stating that he had “tireless energy, cheerful willingness to work at all hours, high professional competence and a genial and charming personality which still further enhanced the value of all his work” and that he “should be delighted to have this officer in my command at any time”

Less than a month after that, Witscher’s unit received a commendation from Maj. Gen. W.S. Rumbouch stating that their work “had been excellent, and that the pictures of the initial landing were available to the newspapers and news reels in the United States in record time.” The unit’s D-Day operation was the first for the Signal Corps in that conflict and it was considered an “outstanding success.”

Witscher demobilized Sept. 17, 1945, and left active duty Dec. 13, 1945, leaving the Army as a Captain. He went back to Los Angeles, California and his wife, Joyce Witscher, where he was a motion picture cameraman.  Witscher donated liberally to the arts, both monies, as well as an extensive collection of photography to a nonprofit organization called the Hollywood Photographers Archives. His images are in several books, including The Americans on D-Day: A Photographic History of the Normandy Invasion, by Martin K.A. Morgan.

Because of brave photographers like Witscher, the public was privy to a more realistic look at warfare than they had ever seen before.