The magic that therapy dogs bring to Veterans 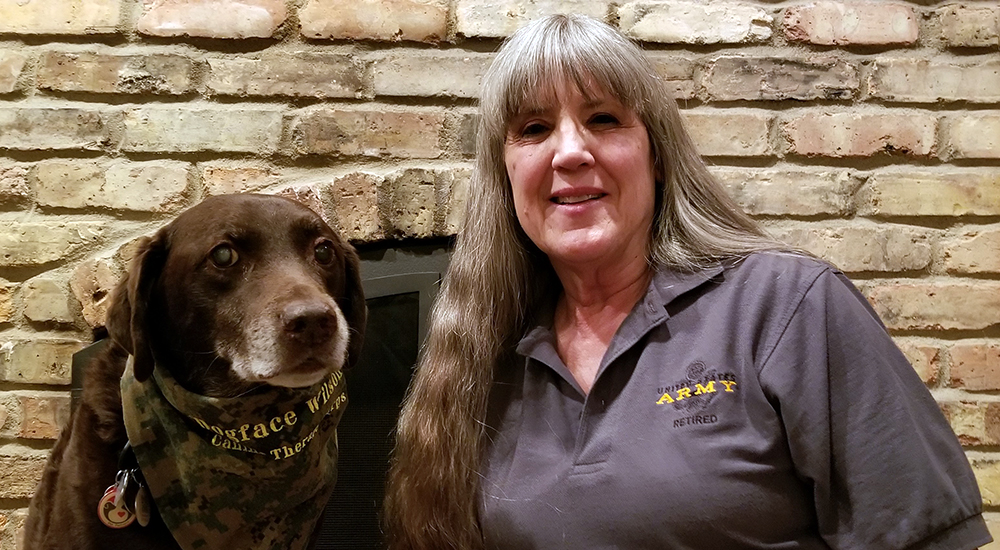 Beginning in 2013, my therapy partner, Wilson, and I began volunteering at the Minneapolis VA Medical Center. We were fortunate to get this opportunity through Pet Partners, and I am doubly fortunate because I, too, am a Veteran, having served 20 years in the U.S. Army.

We were assigned to the polytrauma unit where we have had the opportunity to work with patients who were severely injured and those well on the way to recovery. Prior to COVID-19, we volunteered two times a month.

When we come to the unit, we are part of a group session run by a recreational therapist. The session provides an opportunity for patients to build their communication skills, work on thinking skills or just be with others. The activities run the gamut from group discussion to games, outings and other activities.

Wilson and I are essentially “one of the gang” during the session.

Our role can take a variety of forms. If the group is in a discussion, our job is to be part of the group but also to “float” from person to person, giving each Veteran the opportunity to interact with Wilson while the conversation continues. Wilson enjoys this and he’s developed a nice way of saying hello as we move about: he’ll gently nudge a hand or put his chin on a veteran’s leg.

He’s learned that Veterans give the best scratches and shoulder rubs.

When we visit with patients who can communicate verbally, we often hear about their current or former pet or we talk about whatever is on their mind. These Vets often enjoy talking with us, especially when they know I’m retired military!

At other times, we are the center of attention, telling Wilson’s story, answering questions, discussing what therapy dogs do and clarifying how they are different from service dogs.

While the group sessions have been rewarding, there is a cadre of patients that Wilson has become especially adept at visiting. These patients are the most severely injured. Often they cannot move or speak and might only be able to blink their eyes or make a sound in response to a question.

The recreational therapist will move a chair for Wilson next to a patient. Wilson has learned that this is his signal to climb up on the chair, often leaning into the patient, waiting calmly to see what the interaction will be. Will a hand be moved toward him? Perhaps a finger or two may rub his head, or maybe it will just be some grunts.

It doesn’t seem to matter. Wilson has been known to stay next to a severely injured Veteran for close to 20 minutes, sitting still while being touched or just waiting while the patient works on reaching out with a goal of petting him.

Wilson has also been involved in animal-assisted therapy (AAT) at VA. One time we were there to help a young man learn to use his motorized wheelchair. I was told beforehand the patient had been resistant and angry.

“A turning point in Vet’s recovery. I just cried.”

Our role was simple: Wilson was basically the “reward” if the patient could maneuver his chair down a hallway where Wilson was waiting for him. After a few false starts, this young man was rolling down the hall, in a big hurry, ready to greet Wilson. And what a greeting it was.

After the fact, I learned that this had been a turning point for the young man in his recovery, and I was so moved I just cried.

As I look on my experience working with my therapy dog partner, I am honored and humbled. I often joke that Wilson does all the heavy lifting and I basically keep his calendar and act as his driver, but there’s truth to that sentiment.

The presence of therapy animals cannot be understated. They have a magic all their own and, in their own way, share unconditional love. I am more than proud of how my partner Wilson has served our Veterans, and I’m thankful for our time spent with them and the wonderful people at the Minneapolis VA.

We have both missed our visits so much during the pandemic but look forward to when it’s safe to return. I am equally thankful to have found Pet Partners in 2011 when I was just learning about this idea of therapy animals and wondering if Wilson would make a good therapy dog.

VHA and Pet Partners formed a partnership in 2019 to improve quality of life, social engagement, and health of Veterans by increasing access to animal-assisted activities (AAA) and AAT services throughout VHA. The collaboration is managed by VHA’s National Center for Healthcare Advancement and Partnerships, formerly the Office of Community Engagement.

Cheryl Bann retired from the U.S. Army as a staff sergeant.