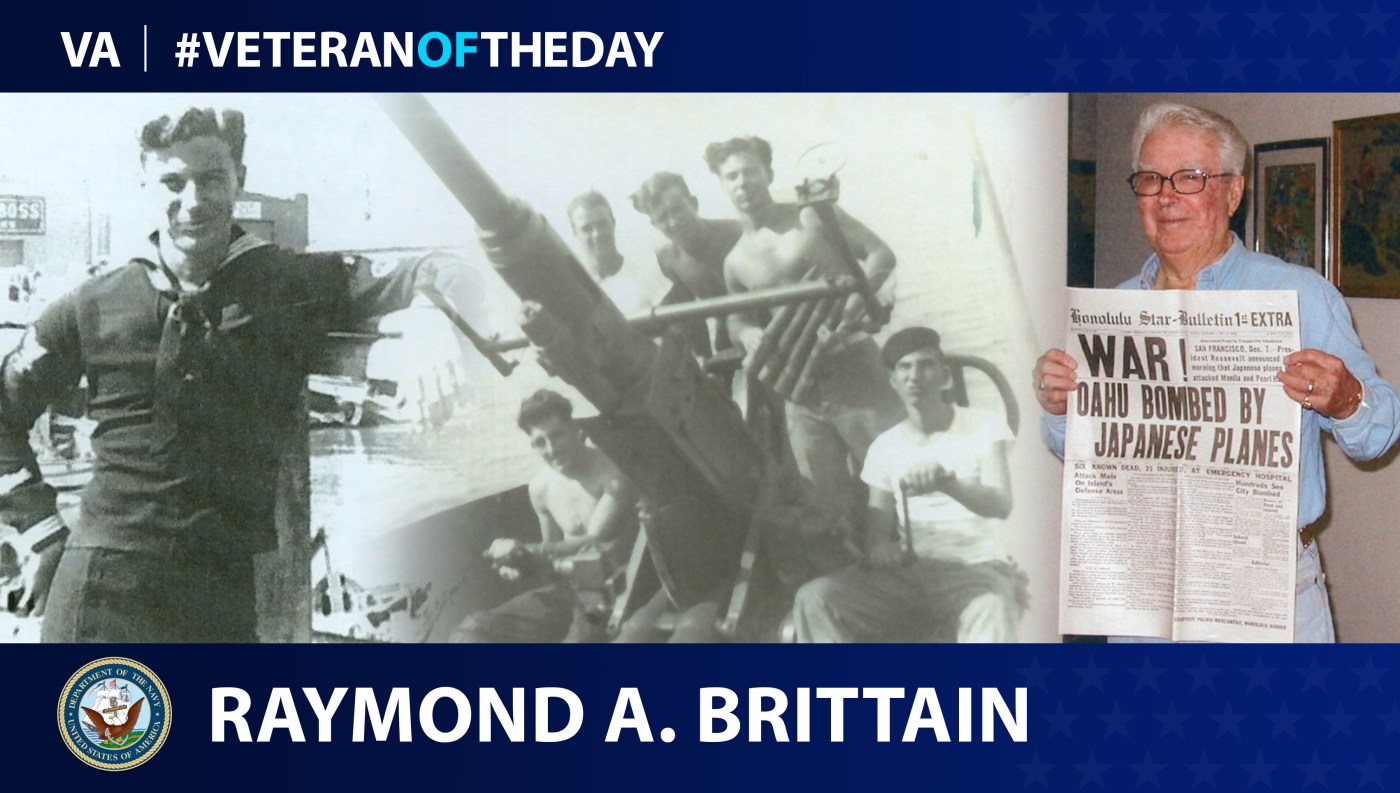 Today’s #VeteranOfTheDay is Navy Veteran Raymond A. Brittain, who survived Pearl Harbor and witnessed the aftermath of the atomic bombs while in Japan.

Raymond A. Brittain was born in February 1921 in San Diego, California, to a family of veterans. After graduating from high school in Torrance, California, Brittain received a four-year scholarship to UC Davis School, where he attended the college of agriculture and environmental studies. In the summer 1940, Brittain and several of his friends decided to join the Navy, and he went to Pearl Harbor.

On Dec. 7, 1941, Brittain was aboard USS Tennessee when Japan bombed Pearl Harbor. He remembered seeing the rising sun symbol on a Japanese dive-bomber before it narrowly missed him and a few others. Confused as to why no alarm sounded yet, Brittain warned everyone on the ship. As more Japanese aircraft flew over Pearl Harbor, he tracked approaching horizontal bombers. Brittain recalled one bomb had fins, exploding near him. Thrown off his post, he suffered a broken ankle, but survived the events of this day.

After the attack on Pearl Harbor, Brittain went to the Aleutian Islands, where he fought to secure the islands and repel the Japanese. He also fought in the Battle of Tarawa. His battleship provided fire support for the Marines on the beach. Following the Battle of Tarawa, Brittain returned to San Francisco, California, to train as a fire controlman. The training allowed him to expand his knowledge on the different use of artillery on battleships and become an antiaircraft director of the five-inch gun battery. Upon completing training, Brittain went to Manila Bay near the end of the war. Arriving in Japan after their surrender, he witnessed the aftermath of the atomic bombs.

While serving the Navy, Brittain married his high school sweetheart, Violet Dalton, who helped construct fourteen engine bombers for the B-17 flying fortress. He called her one of the original Rosie the Riveters. After leaving the military, Brittain served as a sheriff deputy in Kern County, California, for 25 years.

In March 2015, Brittain passed away at age 94. He is survived by his two daughters, his grandchildren and great-grandchildren.