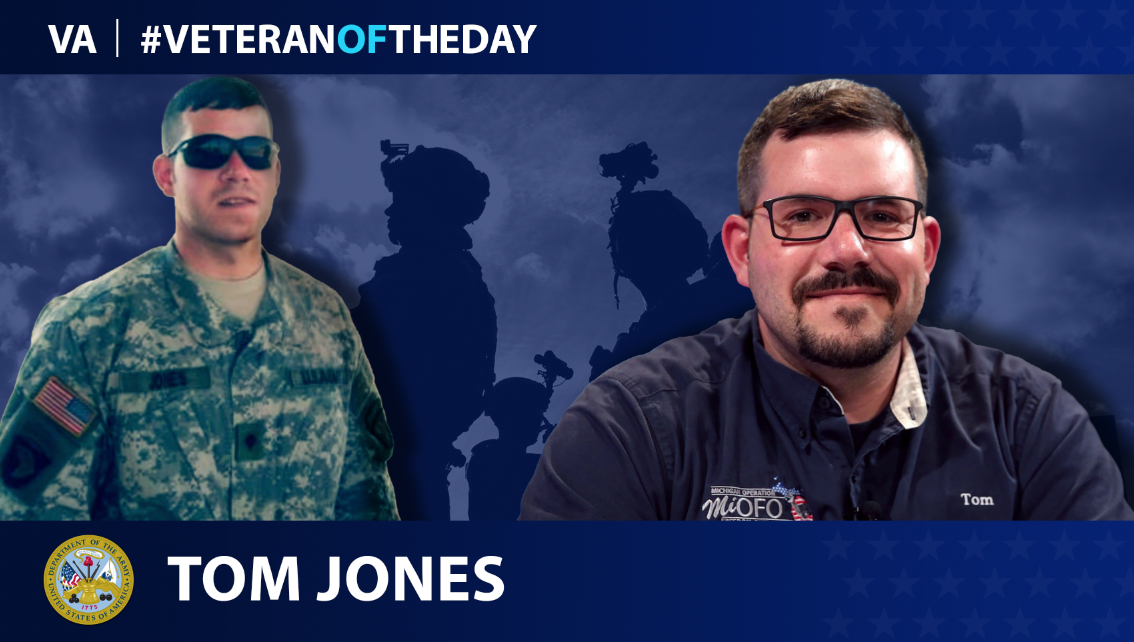 Today’s #VeteranOfTheDay is Army Veteran Tom Jones, who served as a field artilleryman with the 101st Airborne Division during Operation Iraqi Freedom.

Tom Jones comes from a family of service. His grandfather served as a belly gunner in World War II and his father served during the Vietnam War. Following in their footsteps, he enlisted in the Army in 2001 after the 9/11 terrorist attacks, which he credited as his calling to serve. He completed training as a field artilleryman at Fort Sill, Oklahoma.

After training, Jones went to Fort Campbell for one month. He received further training before deploying during the initial invasion of Iraq with the 1st Combat Brigade, 101st Airborne Division, 320th Field Artillery Team. Jones’s primary missions during his 10-month tour included conducting patrols, training Iraqi forces and guarding U.S. and ally assets. He then returned to the U.S. for one year, continuing to train before his second tour.

Jones returned to Iraq in 2005 for 13 months where he was a member of a quick response force. The rules of engagement, equipment and politics had changed since the last time he was in Iraq, making his second tour significantly different. In 2006, he was struck with a mortar round, suffered head trauma and lost consciousness.

Jones transitioned out of the Army in 2007 with the rank of specialist. He refers to the difficulty of reintegrating into civilian life as his “third deployment.”

Jones is currently employed as a service officer at the Michigan Operation Freedom Outdoors. At this non-profit organization, he uses his military experience to help retired Veterans and civilians attain the resources they need to live more enjoyable lives. He also serves as the vice chair for the Accessibility Advisory Council of the Michigan Department of Natural Resources.

Jones lives in Livonia, Michigan, with his wife and three children.