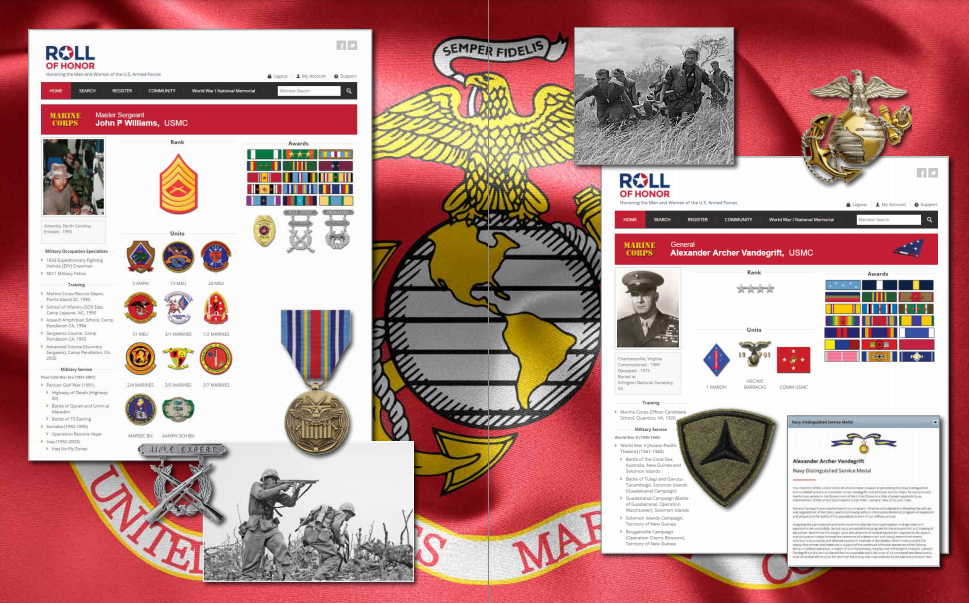 On April 6, 1917, the United States declared war on Germany, entering what was known at the time as “The Great War.” More than 4 million American men from across the country entered military service, 2 million served overseas, about 320,000 experienced wounds or illness, and 116,516 died during the war.

More than 300,000 WWI Veterans have profiles on RollofHonor.org

What is the World War I Roll of Honor?

To commemorate the 100th anniversary of WWI, the Roll of Honor Foundation in partnership with the U.S. World War One Centennial Commission has created a special virtual memorial for the Doughboys of the “Forgotten War.” More than 350,000 WWI Veterans have profiles already created by the non-profit charity to be viewed. The profiles contain the rich histories, medals, units and era-accurate rank insignia.

“Roll of Honor has been a great partner in our World War I Stories of Service project,” said Chris Christopher, publisher of the web site of the U.S. World War I Centennial Commission. “As we prepare for the opening of the new National World War I Memorial in Washington, DC, we look forward to continuing the relationship with Roll of Honor, as we remember all those who served in our nation’s uniform in WWI.”

Connected with the new WWI National Memorial in Washington D.C., the WWI Roll of Honor commemorates the service of individual soldiers, sailors and Marines who responded to the call “Over There” in support of the war-weary Allies and helped achieve victory in the “War That Changed the World.” Online visitors can search for their ancestors’ profiles or submit whatever information they can to create a profile for an individual service person so their memory can be honored. This service is free.

To assist in building your Veteran’s profile and history, the U.S. World War One Centennial Commission offers great tips and tools to locate the documents and records of WWI Veterans.

All are welcome to use RollofHonor.org for free to learn more about family history, honor those who served in The Great War, and to add their own ancestors to the registry.

Actor Gary Sinise will host the inaugural flag raising at the memorial site and virtual program, held only online at https://firstcolors.worldwar1centennial.org/.

The program honors those who served in the trenches and on the home front. It also celebrates a nation forever changed by the sacrifices they made. The ceremony will feature remarks from present and past military officials and government leaders as well as entertainment celebrity appearances.