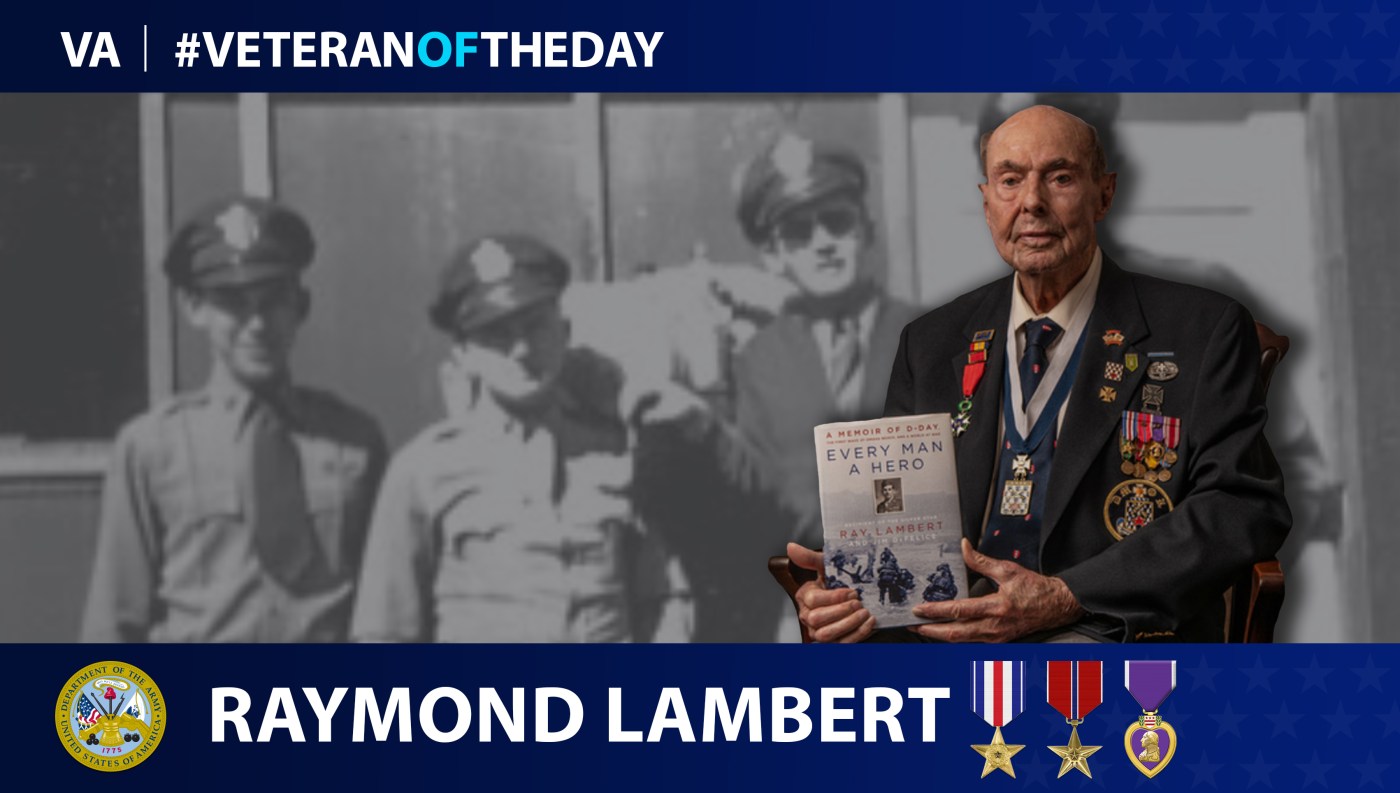 On the D-Day anniversary, today’s #VeteranOfTheDay is Army Veteran Raymond Lambert, who landed on Omaha Beach during the Normandy invasion.

Raymond Lambert enlisted in the Army in 1940 because “he wanted action” and to be “a part of a fighting unit,” he said during an American Veterans Center interview.

Lambert completed Army Basic Training at Fort Benning, Georgia. After graduating, he received specialized medical training with the 2nd Battalion, 16th Infantry Medical Detachment at Fort Riley, Kansas. Lambert described training as a first-line medic; his job was to give first aid to the wounded, save their life, give morphine for their pain and send wounded soldiers back to hospitals for more care.

He partook in the invasion of North Africa in 1943 and received injuries. Later in 1943, Lambert was a part of the Sicily invasion, again receiving injuries.

In 1944, Lambert landed on Omaha Beach with the first wave of the D-Day invasion. According to the Department of Defense, only seven of the 31 soldiers in his boat survived the day. The Germans killed the other 24 before reaching the shore. Lambert received another wound on his right elbow as he assisted fellow soldiers to reach the shore.

Despite his personal injuries, he quickly established a treatment zone. He treated wounded soldiers and comforted the dying behind a slab of concrete. The concrete slab is now referred to as “Ray’s Rock,” according to The Pilot. Lambert lost consciousness while dragging wounded men ashore. A doctor spotted him, and a landing craft picked him up. His brother, Bill, also received wounds in the invasion. The two went to an American field hospital in England for medical treatment, according to The American Homefront Project. As noted by the Smithsonian Magazine, Lambert received one Silver Star, two Bronze Stars and three Purple Hearts for his bravery during World War II.

After World War II, Lambert returned to the United States and took classes at the Massachusetts Institute of Technology on the GI Bill. After college, he founded electrical contracting companies. In 2019, he wrote the book Every Man a Hero detailing his firsthand account of the D-Day invasion. In June of the same year, Lambert was one of only a handful of living D-Day Veterans who attended the 75th anniversary commemoration of the Normandy Invasion. Lambert passed away in April 2021.