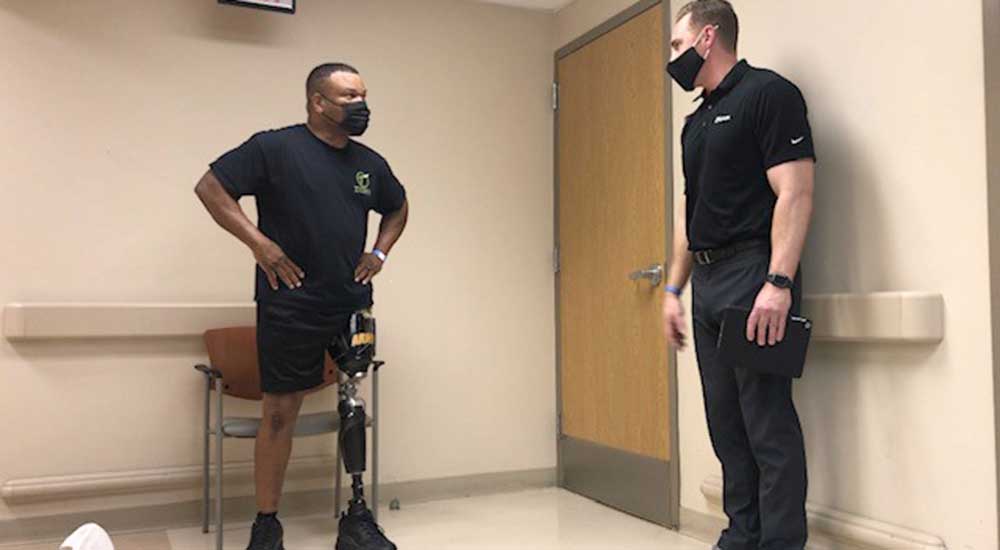 Bounds is one of two Veterans at Tennessee Valley Healthcare System and a handful of recipients in the nation to receive a new type of prosthetic leg.

“The new leg feels almost human,” Bounds said about his new, next-generation POWER KNEE by Össur, an international company that developed the prosthetic. “When the VA prosthetic team told me about this prosthetic leg and what it does, I thought I’ll have my leg back and at full function.”

According to Össur, the POWER KNEE is the world’s first motor-powered microprocessor prosthetic knee. The prosthetic uses artificial intelligence to detect and aid human movement patterns such as speed and cadence when walking, kneeling, standing and sitting.

Bounds suffered a left leg injury during his 14-year Army career that required doctors to amputate the leg in 2016 after an infection. He has used a prosthetic leg ever since and says the new prosthetic feels different and better.

“This prosthetic knee, so far, is top-notch,” he said. “I can power through obstacles. It can lift me up. It helps me go downstairs. Now, I can cut my grass a little bit better. I can do things better now than I did before, and it makes me look like a superhero.”

George Lara, with Össur, explains the prosthetic is in early market acceptance.

“Came back to VA because care here is top notch.”

“The Nashville and Boston VA are the only VA sites to receive the POWER KNEE,” said Lara. “It means a lot to help Veterans. VA understands patient outcomes and they understand the need to develop technology in order to improve patient outcomes. At the end of the day, the folks who benefit from this are VA patients.”

“I did see an outside provider but I came back to VA because the care here with Paul, Mike, and Tennessee Valley prosthetics is top-notch,” Bounds added.

Hannah McDuffie is a public affairs specialist for the Tennessee Valley Healthcare System.