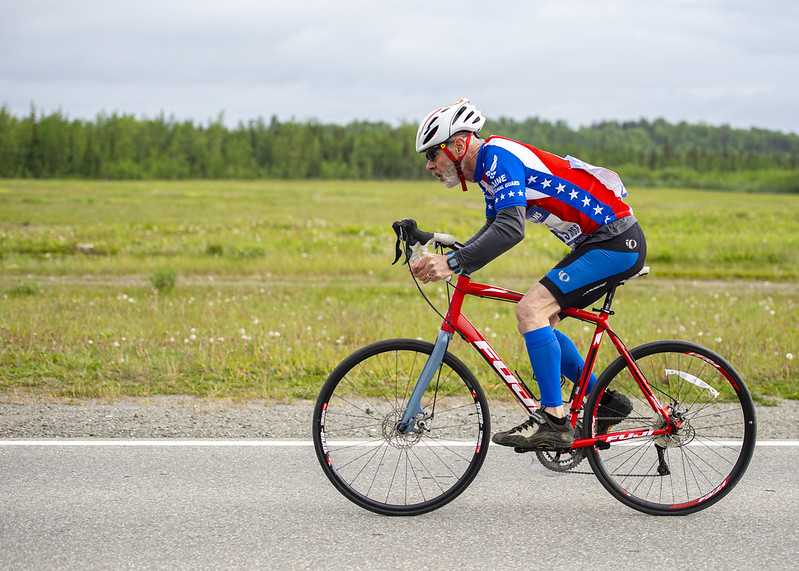 In the first-ever National Veterans Golden Age Games (at Home), nearly 200 Veterans participated in the weeklong event, which included six competitions for Veterans to complete at home.

Army Veteran Lenny McNair was one of them. After multiple surgeries to his spine and years of chronic pain, McNair was depressed and feeling hopeless. It was in 2014, during a physical therapy session at VA Maryland Health Care System, that he saw a poster promoting the National Veterans Golden Age Games. The images of athletic Veterans cycling, bowling and swimming inspired him to ask his kinesiotherapist about the event. That summer, McNair was on his way to Fayetteville, Arkansas, to compete for the first time at the Games.

“I think it was the best decision I’ve ever made,” said the 73-year old Vietnam Veteran. “That first (Games), I learned a lot about myself. It’s like a diamond, you have to dig a lot to find it, but it’s worth it.”

Army Veteran Lenny McNair gets in a workout at home. The 73-year old Vietnam Veteran is one of nearly 500 Veterans participating in the National Veterans Golden Age Games at Home, May 10-28.

McNair didn’t win any medals the first year, but said he discovered something more important – the inspiration to live.

“The thing that keeps me alive is the cycling,” he said. “I was out yesterday, and I did 48 miles.”

Adapting to a New Challenge

For the health and safety of everyone during the COVID-19 pandemic, VA’s six national rehabilitation events, many of which have been held in person for decades, were held virtually to encourage Veterans to continue their pursuit for sports, fitness and creative arts.

“It was great, I took my mask and I was out there doing it. I worked hard,” McNair said. “Anything you can do to focus on something positive and the fact we had a way to compete was so important.”

McNair, stretching before a ride.

McNair is one of nearly 700 Veterans who participated in the at-home adapted national rehabilitation events last year.  With live and webinar sessions for sports competition, health and wellness or artistic performances, Veterans and VA staff across the nation engaged with enthusiasm.

Nearly a year after the first at-home event, the adaptive sports experts at VA’s Office of National Veterans Sports Programs and Special Events are staying creative and looking for innovative ways to make the rehabilitation events exciting and meaningful.

In this virtual modification of the traditional large-scale competition held annually, Veterans will participate in a series of sport challenges and competitions from home, May 10-28.

Nearly 500 Veterans age 55 and older are eager to show their athleticism and model the Games’ motto, “Fitness for Life.”

“Nothing can replace the sights, the sounds, the camaraderie or the energy of being together in person,” said Carla Ruff, director of VA’s National Veterans Golden Age Games. “But as we planned the virtual alternative for 2021, we wanted to make it as close to the real competition as we could.”

Perhaps the biggest piece missing from a virtual event are the fans, and this year’s National Veterans Golden Age Games has found a way for the public to encourage Veteran athletes who will compete for medal honors.

Fans in the Stands allows anyone to register and create video messages or cards to cheer on Veterans. Those videos will be shared on social media.

“We’re really excited about the Fans in the Stands,” Ruff said. “We wanted to give volunteers, families, friends and anyone who wants to show their support and appreciation a way to participate and motivate the Veterans competing.”

As for McNair, he’s eager to compete. “I’m doing the air rifle and two cycling events,” he said. “The competition does something to the emotions. It’s a pick me up for anyone who does it.”

Gerard Maxfield was 17 when he asked his parents’ permission to join the Navy. “I didn’t like school. I was antsy,” he said. “This good friend of mine said ‘I’m going into the Navy. Why don’t we both go in?’”

WWII and Korean War Veteran Gerard Maxfield served in the Navy and Air Force. The 98-year old is set to compete in the National Veterans Golden Age Games at Home for the first time.

With the promise of traveling the world and $21 a month, Maxfield was eager to enlist. His dad was on board and signed the paperwork right away. But his mother was a hard “no.”

Today, at 98 years old, the WWII and Korean War Veteran will be the oldest Veteran competing in the National Veterans Golden Age Games at Home.

“Exercise has helped me my whole life,” Maxfield said. “It helped me be strong and keep my mind clear.”

A Navy and Air Force Veteran, Maxfield also had a message for his fellow Veterans.

“Keep yourself healthy – your body and your mind. When you can, exercise with a friend or on a team like we are doing in the Games. And be proud of your time in service.”

To register for Fans in the Stands, visit the National Veterans Golden Age Games website at www.veteransgoldenagegames.va.gov and click on the “Volunteer” tab.