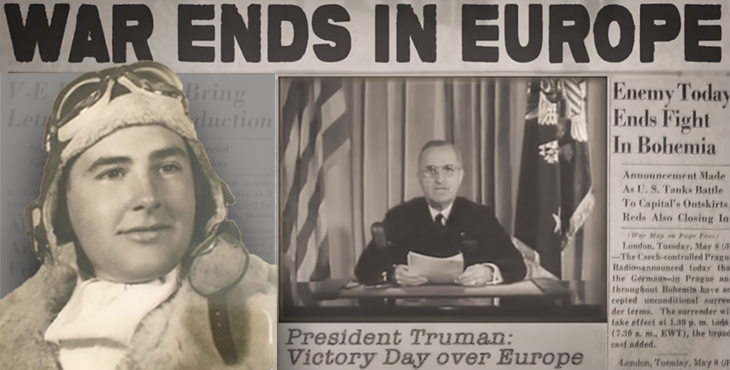 Then-Army Air Forces pilot Warren Halstead flew missions daily out of Coulommiers, France, during World War II. On May 8, 1945, he was at his duty station, on break from dropping supplies and transporting wounded to hospitals in England. The news came in: the war in Europe was over. Seventy-six years later, the retired Air Force colonel still remembers the mixed emotions of Victory in Europe, or V-E, Day.

“My thoughts were just that I did my part to help bring about this day,” Halstead said. “Also, remember, the war was still full on in the Pacific in Japan, so our thoughts were that we were still at war, so V-E Day, although it was important, it was not the end of WWII.”

For the Tulsa, Oklahoma, native, the war had a memorable beginning. His first combat mission came 11 months prior on June 6, 1944, during D-Day.

“Just a few days before D-Day, (Gen. Dwight) Eisenhower visited the Airborne units and pilots designated to drop the paratroopers on D-Day,” Halstead said. “It was very impressive that the commander of all of the Allied Forces wanted to give some words of encouragement before our big mission on D-Day. He knew many of us would not return from our mission. It meant a lot to us to hear words of encouragement from him.”

Halstead’s unit arrived at a training location in Ramsbury, England, in February. They trained constantly from then until June 6. Their training to drop paratroopers consisted of night flying and flying in formation. They also trained on towing gliders stateside before arriving in England.

On D-Day, the 23-year-old piloted his C-47 into the skies in the early hours before daylight. The weather was good upon takeoff, but there were scattered clouds when they arrived in Normandy.

“You could see all of the tracers from the munitions being fired at us from the enemy on the ground,” Halstead said. “They all seemed to be coming right into the cockpit, however, our plane was not hit on that day.”

His mission was to drop the 82nd Airborne Division paratroopers no matter what. Flying in groups of three within a larger formation, he safely dropped the paratroopers. The next day, he towed one glider with troops and equipment to Saint Mare Eglise.

He also flew in Market Garden and Battle of the Bulge, getting hit during both operations. Halstead also flew in Operation Varsity in March 1945. This was the largest airborne operation in history to be conducted on a single day in one location. He towed two gliders of the 17th Airborne Division at one time across the Rhine River. The enemy shot the rudder of his plane just after he released the gliders. They safely landed.

Following the war, he used the GI Bill to attend the University of Tulsa where he graduated in 1950 with a B.S. in Zoology. The Air Force recalled him to active duty during Korea, where he received a Distinguished Flying Cross during a mission flying a B-26 bomber. He retired in 1973, but continued to fly civilian aircraft. He has over 15,000 hours of flying time as a pilot.

“I helped them overcome the terrible regimes they were under,” he said. “I am very happy that these countries are thriving today.”

He said thirty years after the war when he was still on active duty, he took his family to visit Germany.

“The country was thriving then,” he said. “The German economy was thriving, and the Germans were all extremely welcoming to the Americans.”

“I think the remembrances that the WWII Memorial Foundation conducts at the WWII Memorial are excellent ways to honor our Veterans,” he said. “Additionally, the recognition ceremonies by the various U.S. military services as well as at Arlington Cemetery are very poignant reminders of the sacrifices we as a nation made for world freedom and democracy.”

“Many Veterans, such as my father, do not talk a lot about their experiences,” Gail Capp said. “Just be there for them and be available and ready to listen when they do want to open up. Finally, go to their reunions. You will hear many stories there.”

The National WWII Museum strives to preserve the legacy and lessons of World War II through the stories of those who experienced the war. They accept Oral Histories and memoirs that people have conducted or printed themselves.

Submit written World War II memoirs or stories for the Museum Library by mail to:

Learn more about the museum’s oral history project at https://www.nationalww2museum.org/oral-history-resources.

The Veterans History Project of the American Folklife Center collects, preserves, and makes accessible the personal accounts of American war Veterans so that future generations may hear directly from Veterans and better understand the realities of war.

Download a field kit to do interviews at https://www.loc.gov/vets/kitmenu.html.