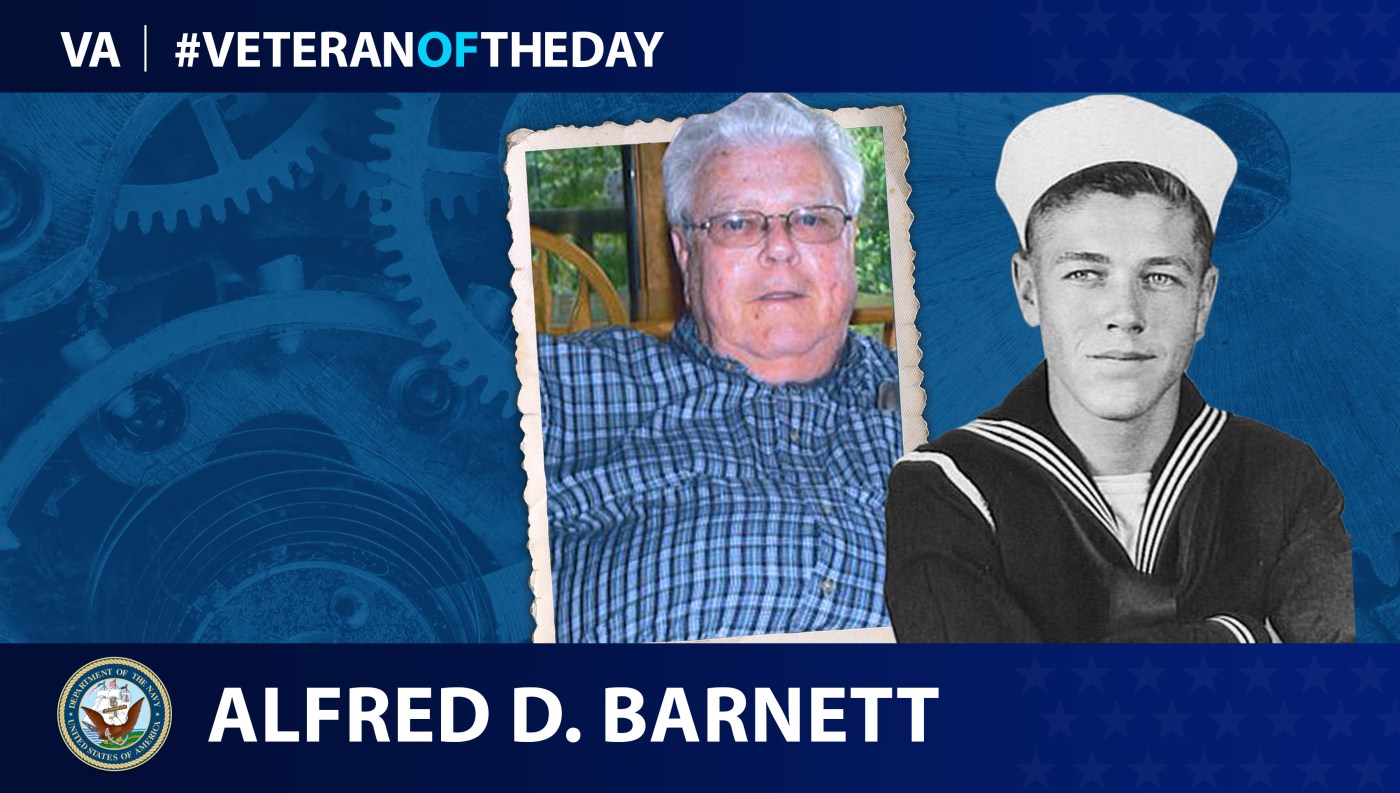 Today’s #VeteranOfTheDay is Navy Veteran Alfred Daniel Barnett, who served as a motor machinist’s mate in the Pacific theater during World War II.

Alfred Daniel Barnett was born in August 1926. He enlisted after the bombing of Pearl Harbor and wanted to follow in the footsteps of his brother, who was in the Navy. Barnett attempted to forge his mother’s signature on his recruitment form when he was 16. His mother forced him to wait until he was 17 to enlist. Upon enlisting, Barnett completed training in San Diego, California.

In the Navy, Barnett took a special interest in mechanics and engineering. In a 2003 interview, he described working on machinery ranging from boilers and turbines to propellers. Barnett worked as a water tender, ensuring that clean water was in the boilers. “You think of the man carrying the pail of water at a football game,” he joked.

During the course of his service, Barnett developed malaria and stayed in a hospital in Rhode Island. He later recovered and returned to service. While serving in Okinawa, he took part in combat against kamikaze fleets, deeply impacted by the experience. He explained, “That’s when you realize you’re in the war.” By 1946, Barnett was a seasoned Veteran and began instructing new recruits. After the announcement of the Japanese surrender, his ship helped to carry American troops in from the occupation of Japan. During this time, he visited Nagasaki. “I forget exactly how long it had been,” he said during his interview. “Some of us went ashore there and looked at the devastation.” Barnett left the Navy in 1946 as a motor machinist’s mate.

Barnett continued to pursue his passion for engineering after he left the Navy. He ran four businesses, including Barnett Electric and Barnett Heating and Air. He was an active member in the community of Warren, Arkansas, volunteering with the city council, chamber of commerce and planning commission. In 2003, Barnett was the Bradley County Citizen of the year. He also remained an active member of the Veteran community, serving as the chairman of the Bradley County Veterans and the local Veterans and Foreign Wars post. He was a leader of Veterans’ activities in the area. His obituary states that his proudest accomplishment was helping to develop the Bradley County Veterans Museum.

Barnett passed away on Aug. 31, 2010. His two sons, Daniel and Darren Barnett, as well as seven grandchildren survived him.