Deafened by rare disease at 12, today a VA scientist 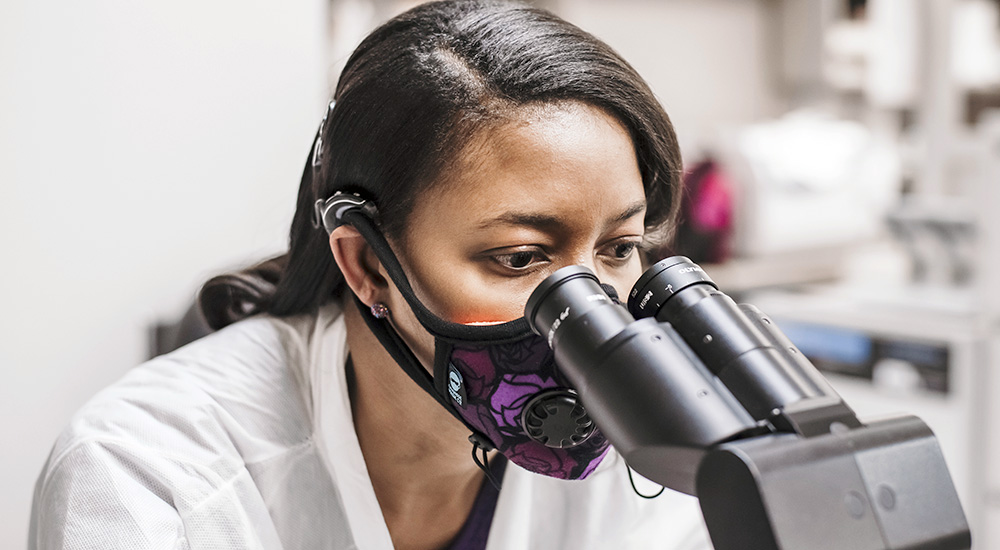 Born and raised in Montgomery, Alabama, Nicole LaMont comes from a legacy of VA family members and Veterans. She was like any other child growing up: outgoing, adventurous and free-spirited with dreams of one day becoming a scientist at VA.

“My childhood was filled with imagination of adventure and curiosity and I was plain carefree as a child should be,” she said.

“One of my goals is to contribute to the Veteran community treated at the Birmingham VA.”

At the age of 12, tragedy struck when she was diagnosed with Neurosarcoidosis, a rare, life-threatening disease.

It’s caused by inflammation and abnormal cell deposits in any part of the nervous system that typically occurs in adults.

The disease robbed LaMont of her hearing in both ears overnight. She was deemed the world’s youngest and only living person with the disease at the time of diagnosis by the Children’s Hospital in Birmingham, Alabama.

“My world was turned upside down,” she said. “I went from being a talkative, joyous child to being quiet, introverted and depressed.”

As LaMont battled to survive, doctors informed her family to enroll in the “Make-A-Wish” foundation and prepare for the worst.

LaMont had other plans for her life

“Through the power of prayer, the doctor’s guidance, medical procedures and chemotherapeutic drugs, God spared my life,” she said.

After the traumatic life events, LaMont’s family involved her in intensive therapies and introduced her to American Sign Language (ASL) when it was determined her hearing would not return.

A year later, LaMont received a cochlear implant. The surgically implanted hearing device brought back some light into her life as she learned to navigate her new normal.

It wasn’t until she attended Gallaudet University in Washington D.C., a school for the deaf and hard of hearing, that she fully immersed herself into ASL and the deaf community and culture.

“Becoming fluent in ASL and having total communication allowed me to feel a sense of belonging and acceptance again,” she said. “I found my confidence and ‘Visual Voice’ in the performing arts when I was a part of the Gallaudet Dance Company and another professional dance company called the National Deaf Dance Theater.”

It was then that LaMont started her first petition as a deaf advocate to initiate captioning for movie theaters in Alabama. After much struggle, her efforts proved successful and today nearly all movie theaters in Montgomery and Birmingham are captioned for deaf and hard of hearing accessibility.

That was just the beginning of LaMont’s advocacy for the deaf community.

“I lost my hearing but I gained an entire new world.”

LaMont graduated from Gallaudet University with a bachelor’s in biology and minors in chemistry and dance. She continued to use her newfound “Visual Voice” through participating in several pageants. She became Miss Black Deaf DC, Miss Black Deaf Student Union and Miss Deaf Alabama.

“My platform for Miss Deaf Alabama was deaf education for hearing families,” she added. “It’s very important to educate, encourage and support hearing families that struggle with making the best decisions for their deaf child and how to raise them.”

LaMont then became an awareness support coordinator with Cochlear Americas to educate families about the option of cochlear implant devices.

After her time with Cochlear Americas, she decided to continue her original career path in science. She attended Auburn University at Montgomery. There, she became the first black deaf student to graduate in the Medical Laboratory Science Program in 2016.

LaMont decided to compete in another pageant and became the first black deaf person to win Miss Elite Earth Alabama 2016.

“That was my first ‘all hearing contestants’ pageant,” she recalled. “I went on to compete for Miss Elite Earth in Washington D.C. While I did not walk away with the title, it was one of my most inspiring experiences. I had a chance to further advocate for the deaf community and spread awareness.”

From there, she attended the University of Alabama at Birmingham. She graduated with her master of science in clinical pathologist assistant. She is currently the first and only black deaf recipient with a degree of this kind from UAB.

Analyzes all specimens, including COVID-19

Through adversity and persistence, LaMont’s childhood dream of becoming a scientist came true at the Birmingham VA Health Care System where she now works as a medical laboratory scientist who analyzes all specimens, including COVID-19.

“My employment here was intentional,” she said. “I knew without a doubt that I would someday work for VA to serve Veterans alongside my family members. I am so grateful for this opportunity to work at VA and to work in science. One of my goals now is to gain support and find a mechanism whereby I can use my current degree to continue to contribute to the Veteran community treatment at Birmingham VA.”

“Every negative can be turned into a positive.”

Even while working as a scientist, LaMont continues her deaf advocacy work to bring together the hearing and deaf communities. She proves there are no challenges that can stop her from achieving her goals.

“No matter the ‘limitations’ as some may see it, you can still do anything you want,” she said. “Just a little bit differently. You are in control of how you perceive life experiences. With God’s guidance, every negative can be turned into a positive if you allow it. I lost my natural hearing overnight as a child but I also gained an entire new world, the deaf world. I have an entire new outlook on life, an entire experience and a form of wisdom that comes from that experience.”