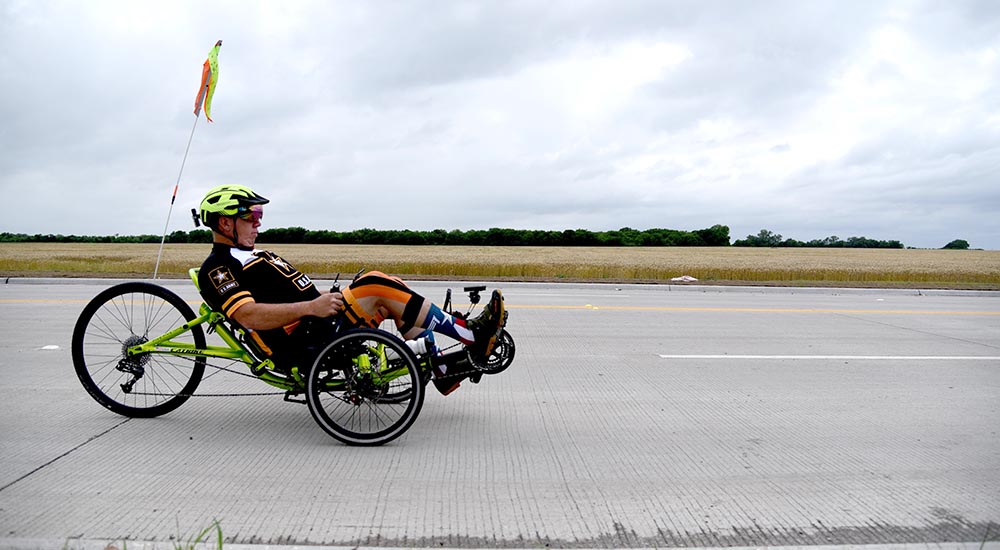 Army Veteran Billy Connel has proven to himself that he can make big life changes in a short amount of time, both physically and mentally.

Connel is a first-time athlete participating in the National Veterans Golden Age Games “At Home” 2021. Just making the age requirement this year at 55 years young, he competed in 5K and 20K cycling and air rifle.

“I’m a very competitive person, so the Golden Age Games was up my alley,” said Connel. “I’ve enjoyed preparing for the games and it has given me a goal to shoot for. I’m going for gold.”

The National Veterans Golden Age Games is the premier senior adaptive rehabilitation program in the United States. It’s the only national multi-event sports competition designed specifically to improve the quality of life for military Veterans age 55 and older.

This year, the games were held virtually for the “At Home” edition. Athletes completed their events between May 10 and 28.

Nearly 500 Veterans across the country competed this year and more than one-third of them competed for the first time. The “At Home” competitions include air rifle, basketball free throw, bowling, blind disc golf, cycling, powerwalking, track and field, and trivia.

Shannon O’Rawe runs the Adaptive Sports Program for the North Texas region and recruited Connel for the Games. O’Rawe is the Recreational therapist for the Physical Medicine and Rehabilitation Department at VA North Texas.

“When Mr. Connell started coming to rec therapy with me, he was in a lot of pain, “O’Rawe said. “He received his first trike and started cycling just six-months ago. Now, he’s been inspired to continue and has come a long way.”

O’Rawe says cycling 30-40 miles a week has really gotten Connel out of his house and that he’s become more active.

With the virtual games, Veterans competed individually and do not have physical competitors next to them. Connel says this can be a challenge, but he always has the Army running cadence playing in his earphones to keep him on pace and motivated.

“I have a service dog and riding my trike has changed his life, too,” Connel said. “It keeps him lean like me and he loves to run behind me when I ride. Since December, I’ve lost 40 pounds. So, yeah I’m turning over a new leaf.”

Connel attributes his weight loss not only to his increased activity, but also to VA’s MOVE! Weight Management Program and living an overall healthier lifestyle.

“I like competing and am looking forward to when the Golden Age Games are held in-person,” he added. “Meeting other athletes virtually is great, but I can’t wait to spend time in-person with other Veterans.”

Jennifer Roy is a public affairs specialist for the Dallas Regional Office.