The origin of Women Veterans Day 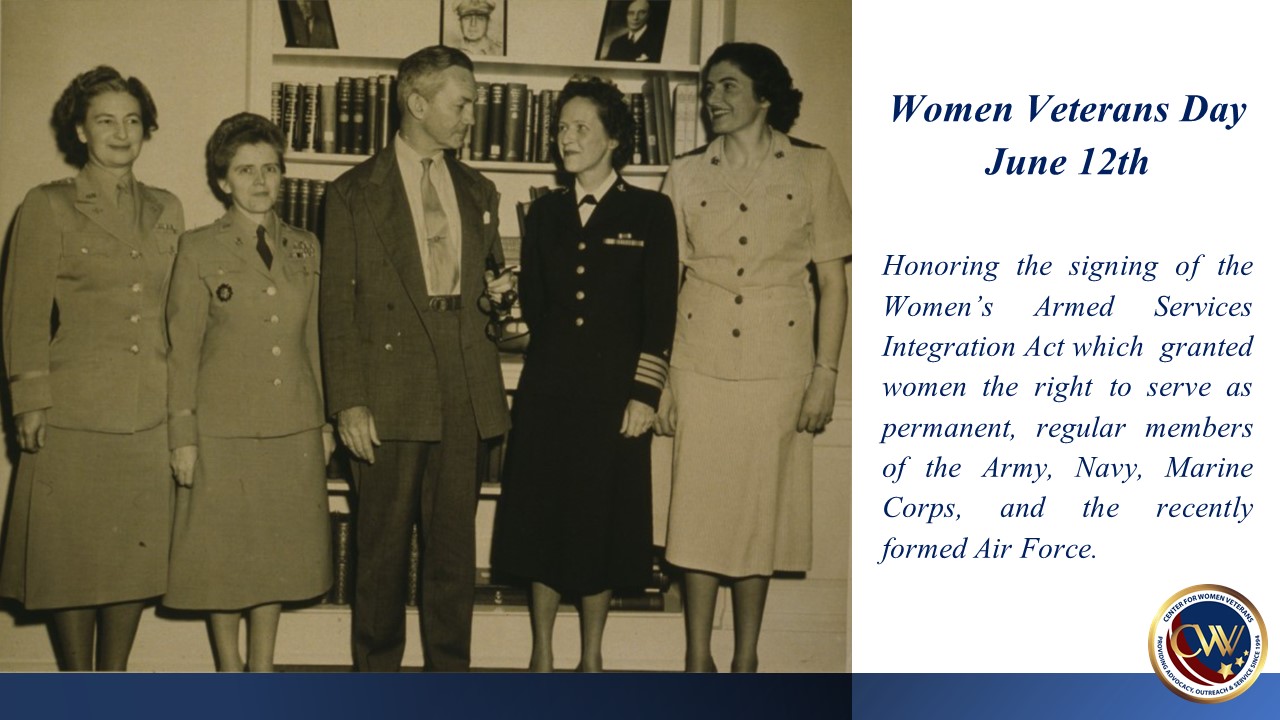 Women Veterans Day, also referred to as Women Veterans Recognition Day and Women Veterans Appreciation Day, is the anniversary of the day the Women’s Armed Services Integration Act (pub.L. 80–625, 62 Stat. 356) was signed into law by President Harry S. Truman on June 12, 1948. Prior to then, only women nurses could serve in the regular and reserve forces during peacetime.

But why do we even need a Women Veterans Day?

Women have served in America’s wars and conflicts throughout America’s history and performed many jobs, playing vital roles in the Revolution, serving as soldiers, raising morale, and spying on the enemy. More than 400 women fought in the Union and Confederate armies during the Civil War. During World War I, about 35,000 women officially served as nurses and support staff, such as the Hello Girls, formally known as the Signal Corps Female Telephone Operators Unit. In World War II, 140,000 women served in the Women’s Army Corps (WACs) performing critical jobs, such as military intelligence, cryptography and parachute rigging. In August 1943, the WAFS and WFTD merged into a single unit for all women pilots and formed the Women Airforce Service Pilots (WASPs), who flew more than 60,000 miles in two years. During this time, the 6888th Battalion was formed as the first and only all Black Female Women Army Corps (WAC) unit to be deployed overseas during WWII. Their nickname was “Six-Triple Eight” and their motto was “No Mail, Low Morale.”

There are currently almost two-million women Veterans in the United States, Puerto Rico, and Territories/Foreign, according to VA. We’re working hard to ensure that women Veterans are treated with the respect and dignity they have earned and deserve. To help achieve that goal, VA Secretary Dennis McDonough has made it clear since assuming his new role that all VA staff, patients, families, caregivers, survivors, visitors and advocates must feel safe in a workplace free of harassment and discrimination.

The Center for Women Veterans was established by Congress in November 1994 by Public Law (P.L.) 103-446 to monitor and coordinate VA’s administration of health care, benefits and services, and programs for women Veterans. CWV serves as an advocate for a cultural transformation (both within VA and in the general public) in recognizing the service and contributions of women Veterans and women in the military, and to raise awareness of the responsibility to treat women Veterans with dignity and respect. The Center is promoting cultural transformation to #BringWomenVeteransHome2VA with initiatives such as: I AM NOT INVISIBLE (IANI), 2021 Women Veteran Trailblazers, naming of VA Spaces after women Veterans, and partnerships with many internal and external partners.

Women Veterans Day is not a separate day for women Veterans, it is a tribute to a groundbreaking day when women were acknowledged as essential to the war efforts and could serve in the regular armed forces.

Missina Schallus is a Navy Veteran and the communications manager for VA’s Center for Women Veterans.