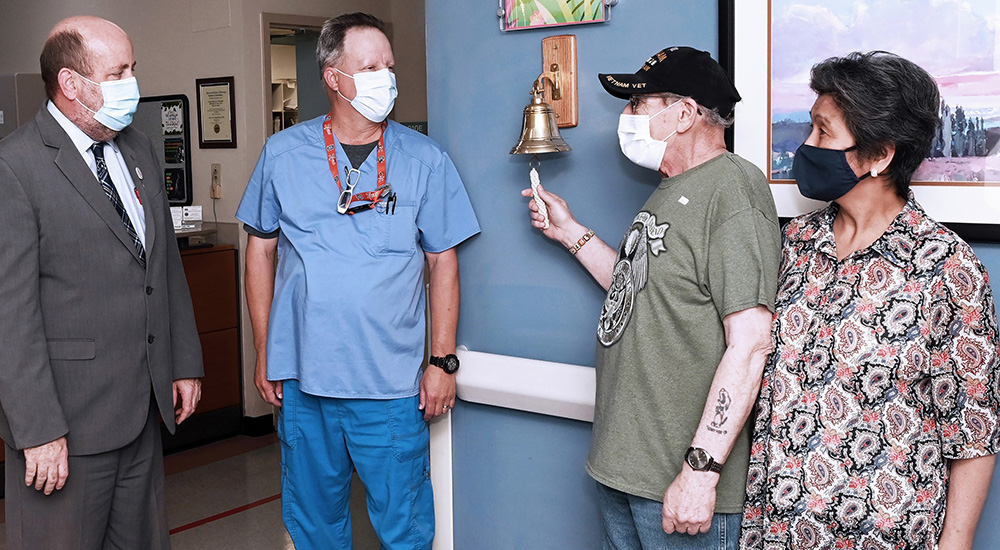 On June 14, 2021, after 39 radiation treatments and six chemotherapies, Thomas received his last radiation dose but still had one final step before recovery.

A staple at many hospitals across the globe, the victory bell is rung at the successful end of a patient’s cancer treatment journey as family, clinic staff members and fellow patients cheer the accomplishment.

Thomas and his wife Cora are planning a summer trip to Michigan. “No more cancers. I’m done.”

To celebrate the milestone (pictured above), Thomas was joined by James Doelling, Hines VA Hospital director, nurse Alan Black, and his wife Cora.

The bell is a new addition to Hines VA Hospital, arriving only a few months before Thomas began his treatment.

“I was watching a show on TV about a cancer patient, and they had the bell when they were done,” said Alan Black, a registered nurse in Hines’ Radiotherapy Clinic and retired Veteran. “I thought, ‘Hey, that’s pretty cool, I should bring that to Hines.'”

“It was just something cool for the patients,” Black added. “Originally, I would carry the bell around. It was something they could do. And it got bigger from there.”

So patients could see hope as they walk in

Word of Black’s new bell quickly spread and it found a permanent home attached near the entrance of Hines VA’s Radiotherapy Clinic so every patient could see hope as soon as they walk in.

“It shows you can get through it,” Jose Quiles said before his fifth of 38 radiation treatments. “Hopefully, a lot more people will be ringing that bell, including me.”

“The c-word, cancer, is a big word for many people, so fighting a battle like this is an accomplishment,” said Maileen Martil, an advanced medical support assistant with the clinic who cheered during Thomas’ victory ring. “They fight for it. Ringing that bell means they won.”

Now free of throat cancer, Thomas will spend the next few weeks recovering from the effects of radiation treatment. While his future includes a summer trip to Michigan with his wife Cora, Thomas is ready to leave one thing in the past.

“I hope I never ring that bell again,” he said. “I’ll ring a bell for any other reason but no more cancers. I’m done.”