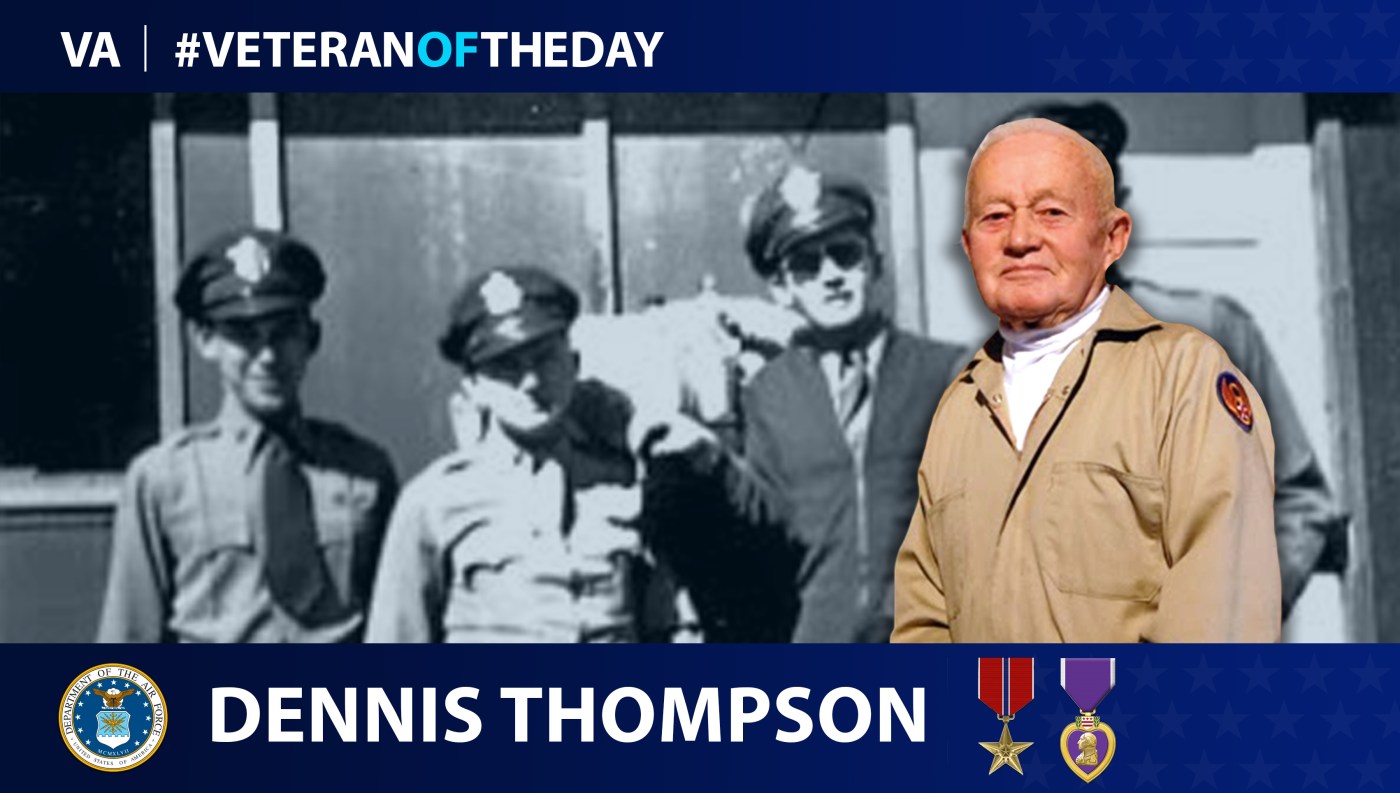 Denny Thompson was born in Fargo, North Dakota, in 1922. His family later relocated to Minnesota, where he and his older brother worked for a railroad company. As he was growing up, Thompson developed a passion for flying, which led him to join the Aviation Cadets in 1943. After graduating the cadets, he joined the Army Air Forces and began training to fly PT-17 biplanes in Brady, Texas. Thompson underwent further training in Salt Lake City, Tucson and Alamogordo on B-24 planes. In April 1944, he flew to Lavenham, England, as a part of the 839th Bombardment Squad under the 487th Bombardment Group and 8th Air Force.

Thompson flew in his first mission in May of that same year to bomb a power plant in Liege, Belgium. At that time, most aircraft carried a 6,000-pound bomb and missions took anywhere between five and 11 hours to complete. Thompson received a Distinguished Flying Cross for flying in a mission to bomb a German Tiger tank factory. During the Normandy Landings, he also bombed a German headquarters in France.

After 11 missions in B-24 planes, Thompson’s crew switched to flying B-17 planes, which limited the type and quantity of bombs they could transport. Thompson studied the different bombs until he could be the lead bombardier on many of the crew’s missions. During his 27th mission, flak hit Thompson in the cheek. He received a Purple Heart and was back in the rotation after just 10 days.

In an interview with Columbia College, Thompson recalled his 30th and final mission. An antiaircraft tank round wounded him in the arm, and he described how “when [they] landed, two of the four engines were out, the hydraulics weren’t working, [they] had a flat tire, and [there were] over 200 holes just in the upright stabilizer.” Thompson received a second Purple Heart and declined promotion to captain. He left as a first lieutenant with two Distinguished Flying Crosses, two Purple Hearts, four Bronze Stars and four Air Medals.

Upon returning to the U.S., Thompson briefly worked as a flight instructor in Texas. When World War II ended, he returned to Minnesota. In 1947, Thompson moved to Seward, Alaska, where he bought his own plane so that he could work as a guide and outfitter for hunters. He also joined the Air Force Reserve in Anchorage but was never called for duty. Thompson received the French Legion of Honor in 2017.