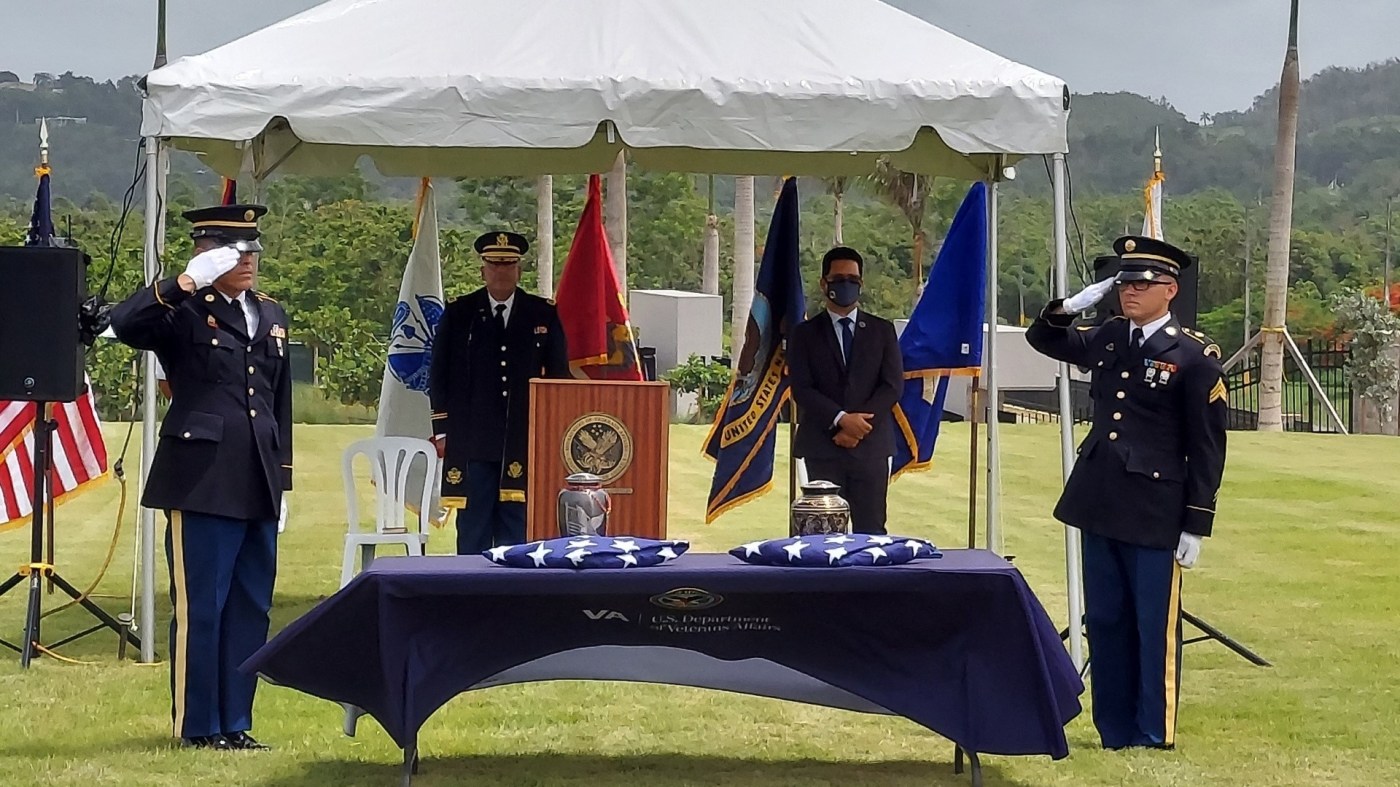 In Puerto Rico, it is rare for a burial to be a lonely affair. Family ties run deep, and families of the deceased will gather from near and far for wakes and to accompany their loved one to their final resting place. So it was on July 12 at Morovis National Cemetery, when the first two of what will be tens of thousands of future Veteran interments took place under the warm Puerto Rican sun.

Army Sgt. Juan Erineldo Otero Santiago and Army Specialist Jaime Sanchez Pantojas shared the distinction of being the first two Veterans interred at the new 247-acre national cemetery, surrounded by loved ones who wished them a final farewell.

Mr. Juan Nieves, the director of Puerto Rico and Morovis National Cemeteries, spoke to the families present, extending the nation’s gratitude for the service their loved ones had given. But his words were also directed to the many Veterans who were not present, but who will one day call these beautiful grounds nestled in a lush, green valley less than an hour’s drive southwest of San Juan their final resting place.

“We are very happy that the National Cemetery Administration will be able to continue to serve Puerto Rico’s Veterans and their eligible dependents for many years to come,” Nieves said.

After these brief remarks, an honor guard from the Puerto Rico National Guard presented the colors, performed the national anthems of Puerto Rico and the United States, and conducted military funeral honors. After honors were performed, the honor guard transported the cremains of both soldiers to their grave sites, where cemetery caretakers simultaneously lowered them into the ground. Family members stood as the honor guard paid homage to their loved ones and, in the end, embraced each other as a final demonstration of their love for one another and tribute to their loved ones now resting.

Morovis was one of six new cemeteries the National Cemetery Administration dedicated in 2020, and one of 155 VA national cemeteries overall. In the decades to come it will serve the burial needs of an estimated 150,000 U.S. Veterans and eligible family members living in Puerto Rico, the U.S. Virgin Islands, the Caribbean region, and Central and South America. Morovis is intended to serve as a replacement cemetery for Puerto Rico National Cemetery in Bayamon. Puerto Rico National Cemetery, which was dedicated in 1949, is expected to run out of space to conduct new casketed interments in 2022, though subsequent interments of spouses and other dependents in existing gravesites will continue after that date.

July 12, 2021, was the first of many, many solemn days at this newest national shrine, where Veterans will continue to be honored for generations yet to come.

By Sharon M. Delgado is a public affairs officer at the San Juan regional office