Will Blog for Change 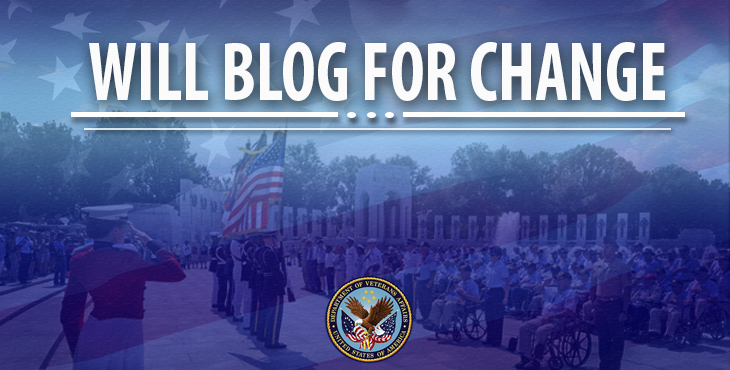 In VA’s Office of Public Affairs, we get a lot of phone calls ranging from routine to down right weird. We also get calls from Veterans who don’t know where else to turn. Usually they have already called every toll-free number in the book, but still haven’t found a solution to their problem.

I received such a call from a Veteran last week that started with, “I know you aren’t the complaint department, but someone needs to know. . . .”

The Veteran told me he was attending school on the Post-9/11 GI Bill and has been since the initial August 1, 2009 start date. Apparently, back in October, he received a letter from VA’s Debt Management Center stating that he owed money–a lot of money. Worried, he called the number on the letter and was told that an audit was performed on his account and he was overpaid on his housing stipend. His response was, “no I wasn’t.”

“Gary, I’m not too proud to admit that I have been contacted by a collection agency before, and trust me, these folks might be a part of VA, but they act just like a collection agency.” Not passing judgment on anyone, I continued to listen. He said he kept getting passed back and forth between Debt Management and Education Services. Finally, a representative in Education Services told him they spotted the problem–whoever performed the audit on his account, keyed in his housing stipend twice for each month, although he was only paid once each month. That representative made a note in his file that the debt was incorrect and he did not owe any money.

Problem solved? Not by a long shot. The next month he received a letter saying he still owed money. Now here’s where I really started to get interested. It’s complicated, but I’ll use simple numbers and a simple timeline to illustrate the problem. The Veteran was paid a $1,000 housing stipend each month for August, September, October and November. Four months equals $4,000. The audit stated he received two checks for $1,000 each month. Twice a month, for four months equals $8,000.

Debt Management was trying to collect $8,000. “Not only do they want the money they think I was overpaid, they want what I was actually paid as well,” the Veteran said.

At this point, I told the Veteran I was going to check into it, but I wanted to make sure I got my facts straight so I summarized what he had told me:

I asked him one final question before hanging up the phone: “Is everything you’ve told me completely true and accurate?” He said yes.

The first thing I tried to do was find a contact in Education Services, without starting at the top of the food chain. I lucked out and found someone who did in fact confirm there was a note in the Veteran’s file that the debt was incorrect. I started to get excited at this point. One, the Veteran apparently didn’t feed me any BS and two, I might actually be able to help this guy. I like helping people, it feels good.

I spent the next five hours, in between working on other projects, trying to track down an inside number to Debt Management with no luck. So I decided to send an e-mail to the address listed on the Web site. It got bounced back.

Finally, I find the e-mail address of the director and deputy director and dropped them a quick message asking them if they could have someone on their staff check the validity of the Veteran’s issue and get back to me. I only needed to know two things: One, if there was an error on the audit and two, if he owes the money or not. Then I briefly outlined the problem and the fact there was a note in his file about it being incorrect.

The director was all over it. Within 10 minutes, he assigned his folks to look into the issue from his office, the Support Services Division in St. Louis, and copied his counter part in Education Services and a member of that director’s staff.

For the rest of the afternoon, I vigilantly watched the e-mail traffic. One particular message caught my attention and I replied to all. I was worried that things were going to snowball and get complicated. I’m a simple man, and don’t handle complicated very well.

So, I just restated, that I only needed a yes or no answer, and not the details. In public affairs, often the timeliness of an answer is more important than the actual answer. It tells you how you should handle a situation and more importantly, doesn’t leave the customer hanging, or more time to stew.

Less than nine working hours later, I got my answers. Yes, there was an error on the audit and no, the Veteran didn’t owe any money. A letter was also sent out to let him know that the issue was resolved. I called him with the news.

I told you all of that, just so I could make a few points, and hopefully do justice to the title of this blog. It’s easy to blame a government bureaucrat for mistakes. But the major hurdle in government is not necessarily the mistake itself, but fixing the mistake. More often than not, a government employee’s hands are tied when trying to solve a problem. There are business processes that must be followed to the letter; functional areas cannot step into someone else’s area of responsibility and so on. If these processes aren’t followed, there can be hell to pay. And since there is hell to pay, employees have to cover the hind ends, document everything and pass the buck along to whoever else is the next person in line. That person may have to defer it yet again until another person does their part before they can do their part. It’s crazy.

I know, because I used to work in an office that’s like that.

When something went wrong, the first order of business was to hold a meeting and assign people to collect the history file. Then we would hold a meeting to go over what was collected. If it was discovered that anyone else was involved, then we would schedule another meeting to gather their input. Then there would be follow up meetings to determine: what went wrong, why it went wrong, what should be done to fix it so it doesn’t happen again; conduct focus groups to review the proposed changes; and near the end, an implementation meeting to introduce the actual changes. After that was all said and done, we might actually get around to fixing the “person’s” problem.

It’s bureaucratic stuff like that, that gives government workers a bad name. More often than not, it’s the law or a regulation based on a law that allows the service.

Back to the Veteran’s story, each of those offices I mentioned have a clear set of defined regulations and protocols they have to follow. Had I not have intervened, the Veteran’s problem would have eventually been resolved properly, but who knows how long that would have taken. Weeks, months, longer. . . .

Unfortunately, not everyone with a problem gets that lucky. Their issue has to run the gambit of rules, regulations, checks and balances–mountains of red tape. The system works, but should it take years in some case to fix simple data entry errors? No.

Things need to change–and they are. Albeit slowly, but changes are occurring in VA, and for the better.

The Change Academy is an example of VA’s latest commitment to transforming the way we do business. It’s is a new service under the Office of Human Resources and Administration’s ADVANCE initiative that offers customized courses to teach leaders how to lead change and foster a culture that embraces transition, and to teach employees to effectively cope with change and embrace the benefits.

VA’s Client Service Initiative, now backed by a system called Executive Veterans Affairs Contact Management System (ExecVA) which is another positive step toward change. The system is designed to greatly reduce the number of Veteran callers from falling through the proverbial cracks.

When a call comes in to Central Office, the customer service representative enters the caller’s information into the system and assumes ownership of the issue. It’s the CSR’s responsibility to ensure the issue is resolved. The system helps them track the issue, assign tasks, and provides periodic reminders until all tasks related to the issue is complete.

In other words, you might get passed to another VA employee, but ultimately there is someone responsible, if you fall into the abyss. The system, reminds them that your problem has not been solved and it’s their job to make sure it does.

You, the Veteran, can help affect change, and thus shape the future of VA by blogging and also commenting on other blogs. Believe it or not, senior leaders are well aware of what goes on here. This is an opportunity for you to blog for change. VA is listening.

As a writer for VAnguard magazine, I plan to follow up with these offices and shed some light on what they can do and what they can’t do. By sharing this information in the magazine and future blogs, it will help more Veterans avoid problems in the first place and hopefully help you navigate the bureaucracy to fix a problem.