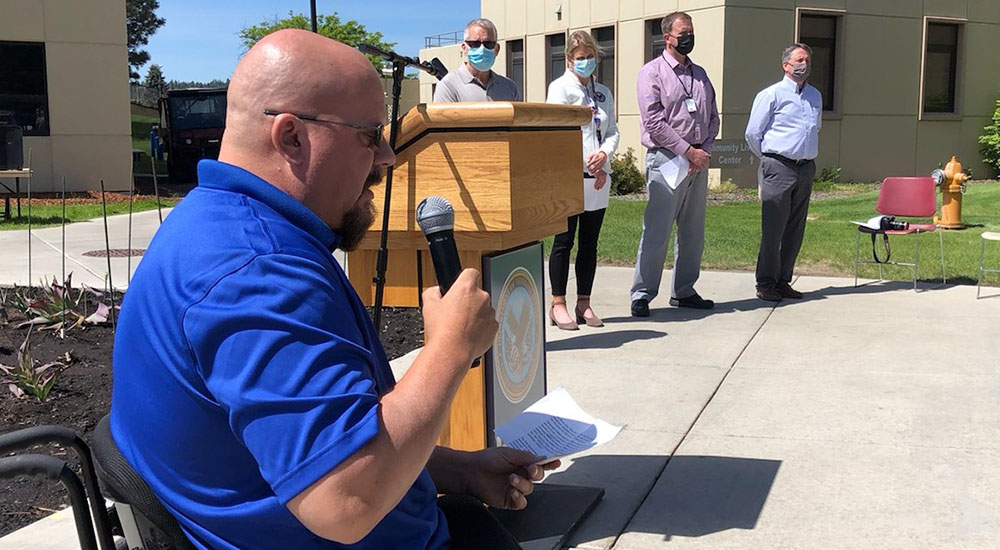 Spokane VA employees are proud to wear and share pin.

King’s kind gesture is something Spokane’s VA employees say they’re proud to wear and share for others to see.

“In the military, the National Defense Medal is issued to every member of the Armed Forces during times of war,” King said. “Clearly, Spokane VA has been at war with COVID-19 that has the potential to kill Veterans. This VA team has demonstrated courage under a ’virus fire’ that threatened to overrun the perimeter of the delivery of the health care system. Spokane VA staff have stood tall even when exhausted.  They have fought the war in the hospital. Their families have borne the burden of their sacrifice too. The Spokane VA has joined our Veteran ranks… as the tip of the spear.”

King remains a staunch advocate for his fellow disabled/amputee Veterans. He’s been doing so ever since he helped make the 2009 National Veterans Wheelchair Games in Spokane a monumental success.

King has been president of the Pacific Northwest Paralyzed Veterans of America for more than seven years. Among his duties as president, he writes grants and sets up several fundraisers a year to earn money for the non-profit. Those funds go directly back into Veterans and community programs.

A large print mural of King is posted outside the main entrance to the executive suite at the medical center.