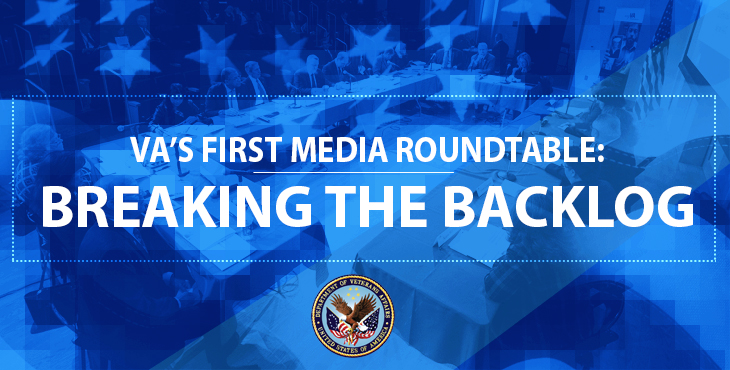 On Friday, we started something new at VA: A monthly media roundtable where reporters are invited to call in or show up in person to grill VA leaders on the day’s topic. The idea is to become more transparent and, by virtue of that, to increase Veterans’ awareness of what’s going on. Yesterday’s topic was the disability claims backlog.

According to Leo Shane at Stars and Stripes:

Veterans Affairs officials on Friday vowed to eliminate the backlog in veterans benefits claims by the end of 2015, ensuring that all those seeking payment from the department will have to wait no longer than three months.

The department’s current backlog, claims that have taken more than 125 days to process, sit around 250,000. John Gingrich, chief of staff for the department, said recent improvements in procedures and technology have made leaders there confident that they can steadily shrink that number over the next five years.

Currently, we’re taking in around 100,000 new disability claims per month—so this is no easy task. At NextGov, Bob Brewin added:

Gingrich said VA plans to adopt the same kind of technology used in the new system for processing claims from Vietnam veterans exposed to the toxic herbicide Agent Orange to handle a wider range of disability cases. IBM developed the Agent Orange system, which went live this November.

The new approach features rules-based software to help automate the ratings process, and takes advantage of online medical examination forms from private physicians, eliminating the need for veterans to have an exam in a VA hospital, which could delay the claims process.

The roundtable was also covered by CNN, American Forces Press Service, and the Salt Lake Tribune. Next month’s roundtable will focus on the Post-9/11 GI Bill and we’ll be sure to get the word out to reporters and bloggers sooner this time. So let us know what you think.