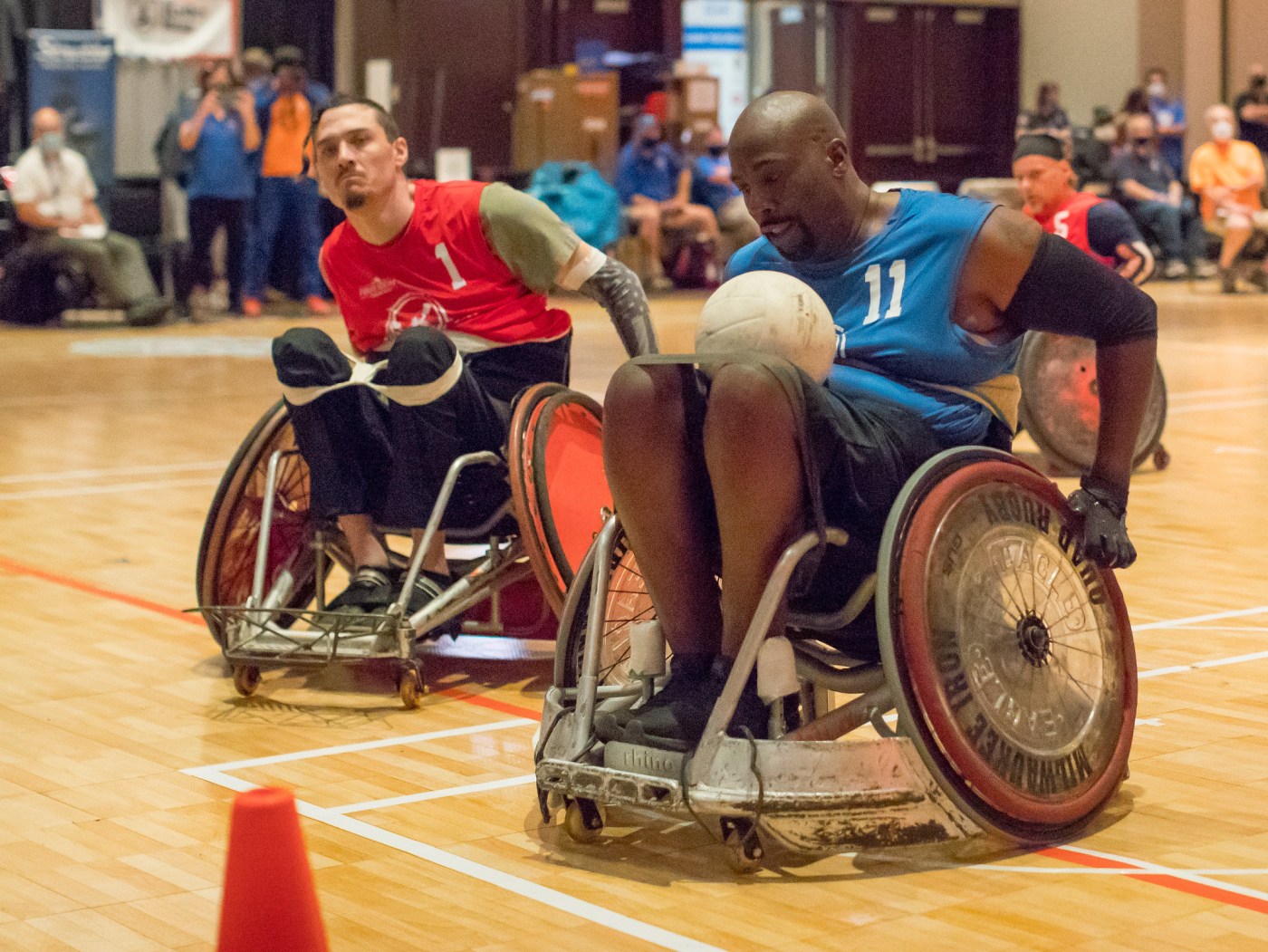 Johnny Holland was a wanted man – for playing wheelchair rugby, that is.

Organizers of the 40th National Veterans Wheelchair Games, which are now underway in New York City, sought him and his athletic skills to help fill out the sport with competitors. Holland gladly accepted, helping the “Team Richmond” rugby squad win the gold medal.

Making it even more special for him is that this was his first time playing wheelchair rugby in 15 years. He looked a little winded after his first of two complete games, but in all he felt good.

“This is pretty good”

Wheelchair rugby is played on a basketball-sized court by four-member teams using a rugby ball. The goal is to carry the ball across the opponent’s goal line.

“It’s not as bad as I thought it would be,” Holland said after scoring four times in a 35-14 rout by Team Richmond in the first game. “I thought it’d be a lot worse, but this is pretty good.”

Jen Purser, one of the directors of the National Wheelchair Games, was key to reeling Holland in to compete in wheelchair rugby. Currently the senior associate director of sports and recreation for Paralyzed Veterans of America (PVA), which is co-presenting the games with VA, she used to lead PVA’s mid-Atlantic chapter. Holland is a long-time member of that chapter.

“I ‘voluntold’ him to do it,” Purser said with a laugh. “I knew he was once an avid wheelchair rugby player. He came down today and got fitted to play. He looked amazing out there.”

More than three decades at the wheelchair games

Holland, an Army Veteran, is also a veteran of the wheelchair games. This is his 32nd year at the games, where’s he’s competing in nine-ball, adaptive fitness, boccia, and table tennis, in addition to wheelchair rugby.

Holland, paralyzed in a car accident in Alaska in 1987, is a quadriplegic with a sense of touch. His nickname, “Quadzilla,” is marked on the side of his regular wheelchair, as is the saying “Support Your Troops.” The wheelchair also sports an Army logo and a Marine logo. His daughter is a Marine.

“There’s nothing like it,” he says. “A lot of Vets, especially those with new injuries, think once they sustain the injury it’s over, that they can’t play basketball or softball, or bowl, shoot pool, or whatever. But coming to the wheelchair games and seeing people like you or worse off than you do these different sports is uplifting and gives you a second breath of air.”

“He’s such a good mentor to people, not just here but outside of these games,” Purser added. “It’s so nice to see that he agreed to play wheelchair rugby and didn’t even think twice about it.”