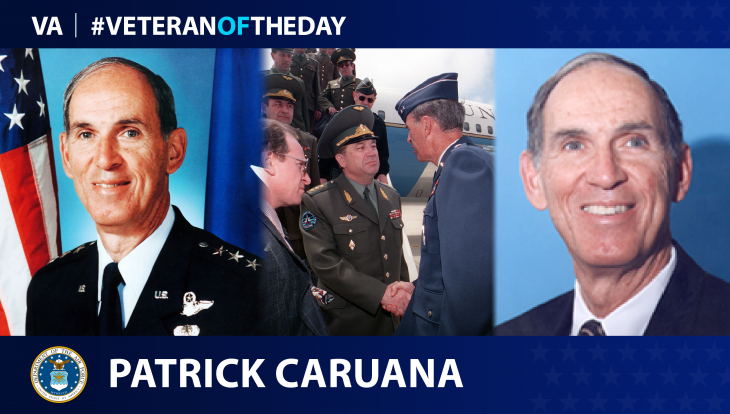 Patrick Peter Caruana was born in November 1939 in St. Louis. He enlisted in the Air Force while he was still in high school. Immediately after graduation, Caruana went to Lackland Air Force Base in San Antonio to complete basic training. He then completed technical school training to become an aircraft mechanic. After he served as a mechanic for two years, Caruana received an appointment to the Air Force Academy in June 1959. He accepted and graduated from the Air Force Academy in June 1963. Caruana then completed one year of pilot training at Vance Air Force Base in Oklahoma, where he learned how to fly jet aircraft. He served as an Air Force officer for the next 33 years.

During the Vietnam War, Caruana served at Takhli and Don Muang in Thailand and Phan Rang in South Vietnam. He flew missions to support troops in South and North Vietnam. Caruana also flew combat support missions to transport troops and supplies for the Army and Special Forces.

Caruana became commander of the 42nd Air Division, Strategic Air Command, at Grand Forks Air Force Base, North Dakota, in September 1989. He then served as commander of strategic forces in Saudi Arabia from August 1990 until March 1991, during Desert Shield and Desert Storm. He, along with several other officers, planned and executed the Desert Storm air campaign. Caruana was in charge of all U.S. Air Force refueling, B-52 bombing and reconnaissance operations. He also commanded the 17th Air Division, which had 12 wings of tanker, bomber and reconnaissance aircraft.

Caruana has served as the chairman of the board of directors for Family Policy Alliance since 2013.