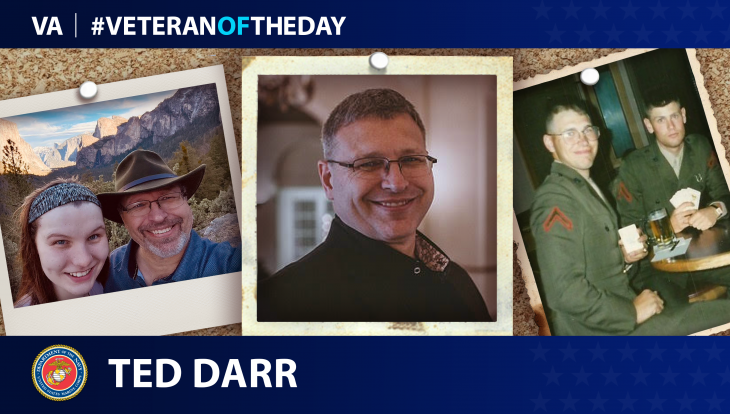 Originally a forestry major, Ted Darr struggled with a low GPA in college. His grades, combined with a friend’s death by suicide, made Darr realize that he needed to make a positive change in his life. He left school to join the military in 1990. A fan of the TV show “Baa Baa Black Sheep,” Darr knew he wanted to join the Marine Corps and work in avionics.

Spending most of his time on helicopters or helicopter assault ships, Darr was often involved in insertion, supply and medical evacuation missions. One of Darr’s favorite things about serving in the Marine Corps was seeing all the different cultures in the places where he was stationed. In addition to Oahu, he spent time in Okinawa, Japan, where he participated in joint exercises with South Korea and Japan. He also served in Thailand, where he was a part of Cobra Gold, and South Korea, where he was a part of Team Spirit. Darr discharged in November 1995.

After leaving the military, Darr returned to college, where his Marine Corps experiences gave him the discipline to succeed. In 2003, he graduated from Oklahoma State University with a degree in business management. For over a decade, he worked for American Airlines, repairing autopilot systems and in management. His time in the Marines prepared him well for the airline industry as the schematics for Boeing jets were the same as those of aircraft he used in the military.

In 2020, Darr and fellow Marine Veteran, Mario Blandini, formally launched Operation Comeback, a campaign dedicated to giving back to Veterans and creating a domino effect of good deeds, through their company Resolve Networks. Operation Comeback “gamifies good” through apps that transform good deeds into money for charity.

Darr said the strong brotherhood ensures that if one Marine needs help, other Marines are always there to help him or her.