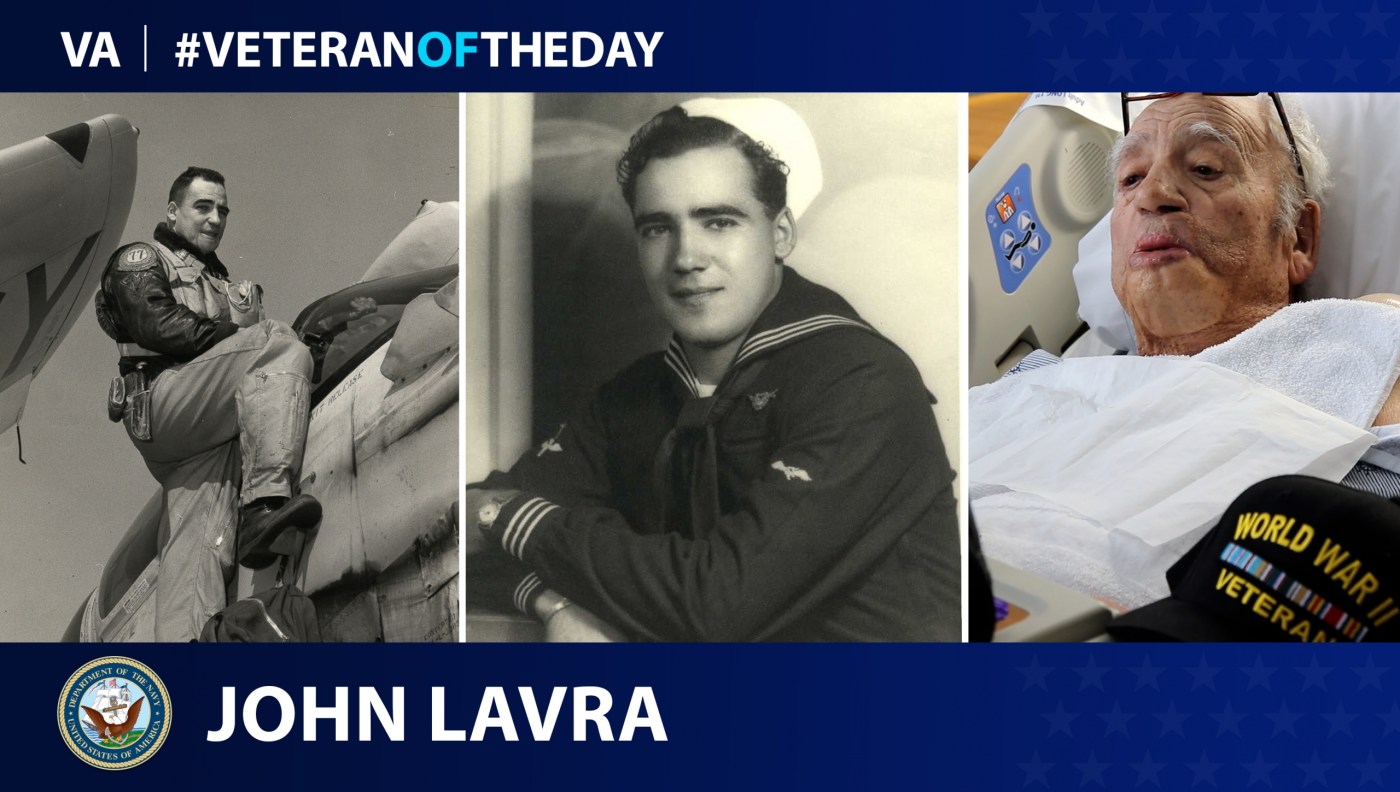 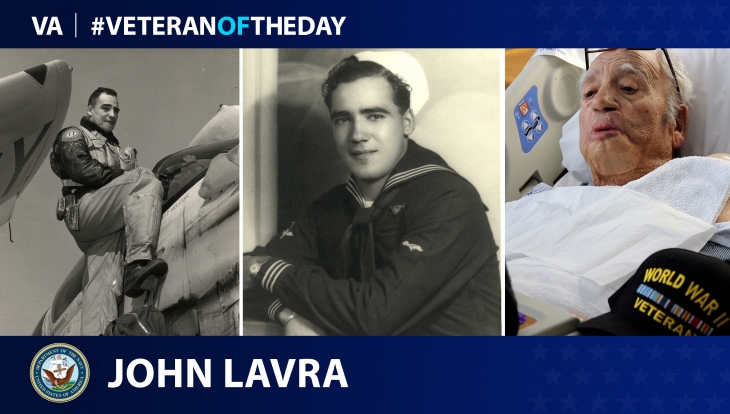 Today’s #VeteranOfTheDay is Navy Veteran John Lavra, one of only 171,000 U.S. servicemembers to see service in World War II, Korea, and Vietnam.

Enlisting in the Navy June 6, 1944 as a combat aircrewman, John Lavra was called to active duty two days later and went on to become one of only 171,000 U.S. servicemembers to see service in World War II, Korea, and Vietnam.

During his career, Lavra flew more than 5,300 hours in more than 22 types of aircraft from propeller-engine fighters and cargo planes to jets. If you ask, the 95-year old will waste no time in telling you which was his favorite: “the Spad.”

The AD-4 Skyraider, the “Spad,” a single engine, 18-cylinder attack plane will forever be linked to Lavra.

On Oct. 20, 1952, he launched from the deck of the USS Essex and 69 years later, his voice speeds up in the retelling of his longest day.

“I got hit at something like 10,000 feet and couldn’t get out of the damned airplane. People were screaming, ‘get out, Lav, get out’ and I’m, ‘what the hell do you think I’m trying to do here’?”

Lavra’s ordeal is documented in his Navy Survival Report dated Nov. 18, 1952, where he describes with precise military detail the events of the day.

“The next thing I know there was flame all over. I grabbed the stick with both hands and tried to keep the airplane flying; I tried to … gain as much altitude as possible. I’d say I gained maybe 1,500 feet, then I went into a very sharp left spin. There was a terrific fire in the cockpit. … As soon as she whipped into a left spin, I realized I wouldn’t be able to do anything with it, so I started to prepare to bail out. I loosened my seat strap. I remember looking for the canopy release handle. It was all enveloped in flames. I clenched my fist, reached through the flames, and felt around until I found it. … I pulled it back – the canopy came open with no strain. The fire increased quite a bit then and the heat was something terrific. I tried not to breathe any flames if I could help it.

“On my first attempt out, I felt as if I was hung up or that the plane had slapped me back in the cockpit because I fell back in a sitting position. I started to look down to see if anything was holding me and about that time, I lost my oxygen mask. The straps had burned off, I think. I saw a big ball of flame. …                        It came right at my face, so I sort of turned and shut my eyes – when I opened my eyes again, I noticed my goggles were gone and so was most everything else. … I tried to get out again. This time I didn’t have much trouble. … I stepped out and dove off.

“I wanted to make a delayed jump, but I … didn’t know how much altitude I’d lost. I reached for the D ring and couldn’t find it. … I couldn’t see it or any part of my harness. … I really got panicky then.

“… I grabbed the D ring and pulled it, (I’d bailed out once before at El Centro and received a heavy jolt. I was waiting for it this time, but it never came). The chute opened very easily, and right then I hit the ground. I had just started to reach for the risers when I hit.”

Today Lavra has six children, 18 grandchildren, and 18 great-grandchildren. His daughter Valerie Lavra was a nurse at the Salem VA Medical Center for 17 years.