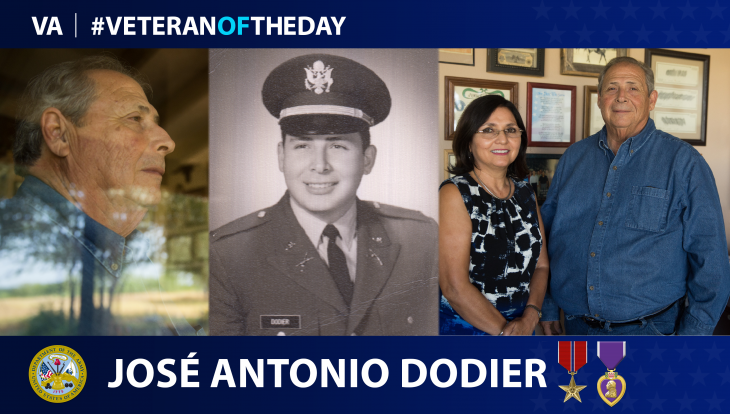 After high school, Dodier married Lucila Zuñiga. He attended college at Texas A&M, where the Corps of Cadets and Reserve Officer Training Corps (ROTC) was mandatory through sophomore year, though he remained voluntarily. By the time Dodier graduated in 1969 with a degree in industrial engineering, he and his wife had three children.

Dodier completed his training at Fort Benning, Georgia, and Fort Sam Houston, Texas. In January 1970, he trained for jungle survival at Fort Sherman, Panama. Later, in February 1970, he went to Vietnam as part of the 198th Brigade of the 23rd Infantry Division.

“We are going to get each other through this,” he promised his men.

On May 28, 1970, his platoon cleared an area abandoned by the Viet Cong. Though he relayed to his company commander that the enemy heavily mined the area, his orders remained unchanged. While he cautiously had his men set up a perimeter around the area, they heard another Army unit set off a mine. They hurried over to help. In the chaos, Dodier stepped on a mine and blew his right foot off. There were three casualties and 28 wounded in total that day. Dodier went to the military hospital in Cam Ranh Bay, then Japan, and then to Brooke Army Medical Center in San Antonio. His foot had to be amputated.

Dodier received a Bronze Star Medal with valor and a Purple Heart.

He discharged at the rank of captain. He returned to Texas A&M and earned a master’s degree in education. Dodier worked at Laredo Junior College (now Laredo Community College), helping Veteran students receive financial benefits. He then worked as a banker for more than ten years.

In 1989, he ran a cattle operation at his family ranch. On his ranch in a picture frame, he has rubbings from the Vietnam Veterans Memorial in D.C. of the names of the three men who died on that day in 1978 in their honor. In an interview with Maggie Rivas-Rodriguez, he stated, “We promised to get each other through. I promised.”