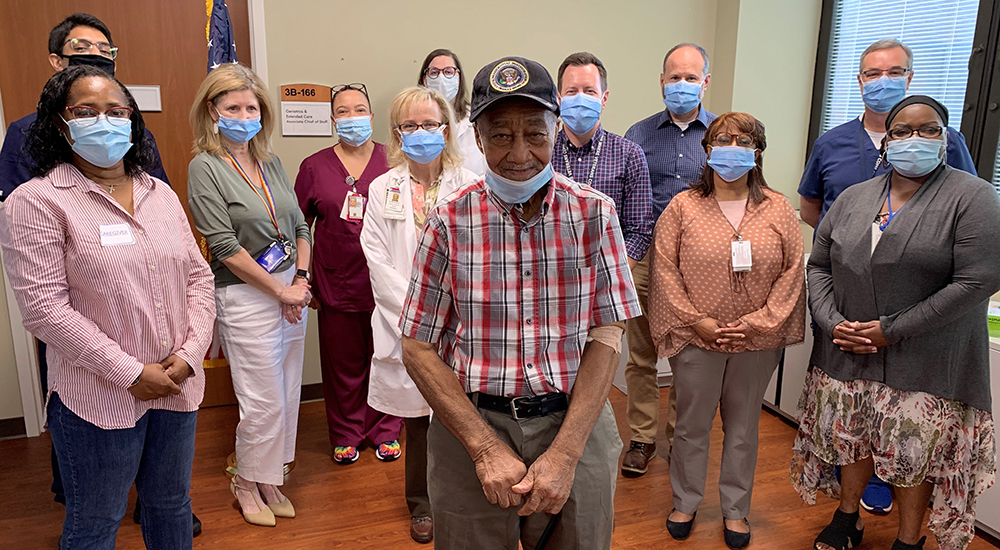 “The Greatest Generation,” a term coined by the famous journalist Tom Brokaw, describes those who came of age during the Great Depression, many of whom went on to fight in World War II.

Brokaw wrote that these people did not fight for fame or recognition but rather because it was “the right thing to do.”

At Little Rock, a commemorative coin is presented to the World War II Veteran in an informal ceremony during their visit to the medical center, and ample time is provided to listen to their life story and celebrate their service.

There are less than 400,000 of the 16 million Americans who served in World War II still alive.

Because of COVID-19 precautions, Little Rock could not celebrate the service of some of our WWII-era Veterans in-person.

Johnson joined the Army March 30, 1944, at the age of 18. He completed his basic training in Louisiana and served in Germany, Indochina and France.

He drove a truck during the final drive across the Rhine and into the heart of Germany.

Johnson happily shared his story during the ceremony. He said the 6 foot by 6 foot “deuce-and-a-half” was such a valuable piece of equipment that Gen. Dwight D. Eisenhower regarded it as one of the six most vital vehicles that helped to win the war.

He enjoyed the attention given to him by the coining ceremony team and said it was a welcome change from his recent “lonely” routine.

Daughter: “He is one of the best dads and men in the world!”

A hardworking man throughout his life, he farmed cotton and soybeans while working full time at a rice mill for 31 years. He supported and provided for his family of 14 children.

Very active at his church, he drove himself to church every Sunday morning and reviewed the sermon after the preacher ministered. He cooked for his wife and took care of her until she passed away in 2016.

At 96, he still cooks, cleans, does his own laundry, does lawn work and maintains a garden. He loves watching sports and enjoys frying and eating catfish.

Veteran care and recognition remain a high priority during the pandemic. World War II Veterans like Irunoes Johnson deserve to be acknowledged and celebrated for their service to our country. The presentation of a commemorative coin is one way for the Little Rock VA to show gratitude to Veterans.