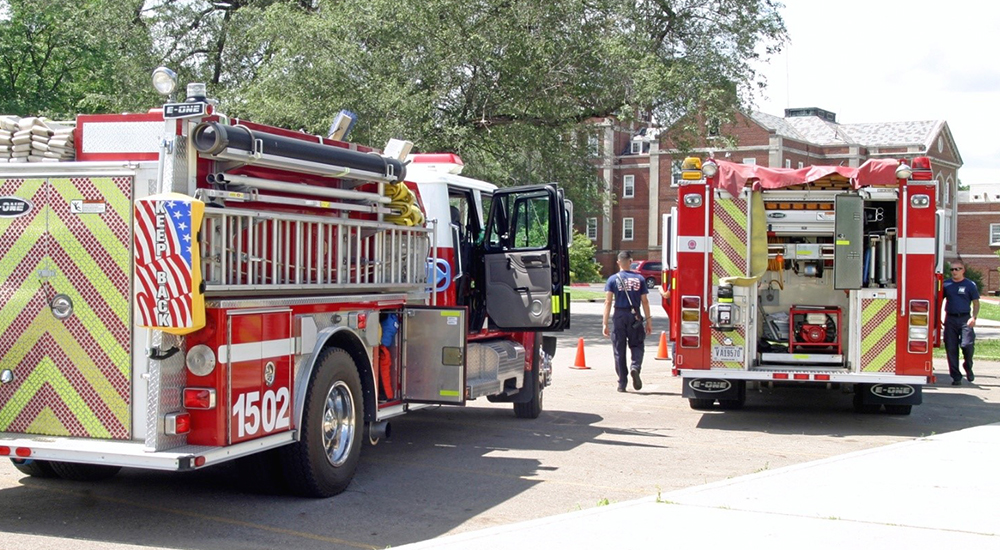 It’s not the kind of assignment that firemen often imagine, but for VA fire department members at the Chillicothe VA on a long road trip in an ambulance to bring a dying Veteran home, it was a duty they were proud to accomplish.

On Aug. 24, a request for assistance came from the Dayton VA Medical Center regarding a terminally ill Veteran hospitalized at the Thomas Jefferson University Hospital in Philadelphia. He needed to be transported to his home in Centerville, Ohio.

Within 45 minutes of the request, the fire department received approval, confirmed the patient care needs and had an ambulance on the road. The crew members on the trip were DJ Richards, Mike Menendez and Nathan Hyman.

The trip to Philadelphia is approximately an 8-hour drive from Chillicothe; the crew was in regular communication with the Veteran’s doctors and nurses the whole way: The Veteran had previously received two liver transplants and was on the list for a third when doctors found that he was terminally ill with cancer.

The Veteran’s wish was to return home to pass in his own home, surrounded by his loved ones. Within an hour of their arrival, the crew had loaded the patient and his wife in the ambulance for a final journey home.

Held fireman’s hand while he slept

The Veteran was frail and the firemen were unsure if he would survive the long trip home. They worked in shifts driving, providing care to the Veteran, tending to the Veteran’s wife, and resting when they could. Before falling asleep, the Veteran reached out and grabbed the hand of firefighter Menendez and said, “Thank you.” He held his hand for over an hour in his sleep.

“When we got the Veteran home, his wife said, ‘Honey, we are finally home.’ When he heard his wife’s words, he expressed the biggest genuine smile I have seen in a long time,” Menendez said. “After… transferring the Veteran to his own bed, we all thanked him for the honor of bringing him home. Even though he was extremely weak and frail, he tried to salute our crew as we left.”

The “hero” arrived home safely on August 25 and died peacefully at his home on August 27.

“No greater privilege than being there in the darkest hour.”

“Some missions in life are much larger than just a patient transport,” Menendez added. “As a Veteran and as a human, having the ability and opportunity to make this Veteran’s last moments easier for him and his family made the almost 24 hours on the road absolutely worth it. I would do it again right now without hesitation.

“Our motto at the Chillicothe VA Fire Department is ‘Pride in Service,’ and that is exactly what this is about,” he added. “It doesn’t matter if it’s my job or your job or their job. Sometimes, it’s just about doing the right thing… serving our fellow Veterans. There is no greater privilege than being able to be there for someone in their darkest hour and hardest moments and ensuring them you will complete the mission, following through on the promise made by VA.”