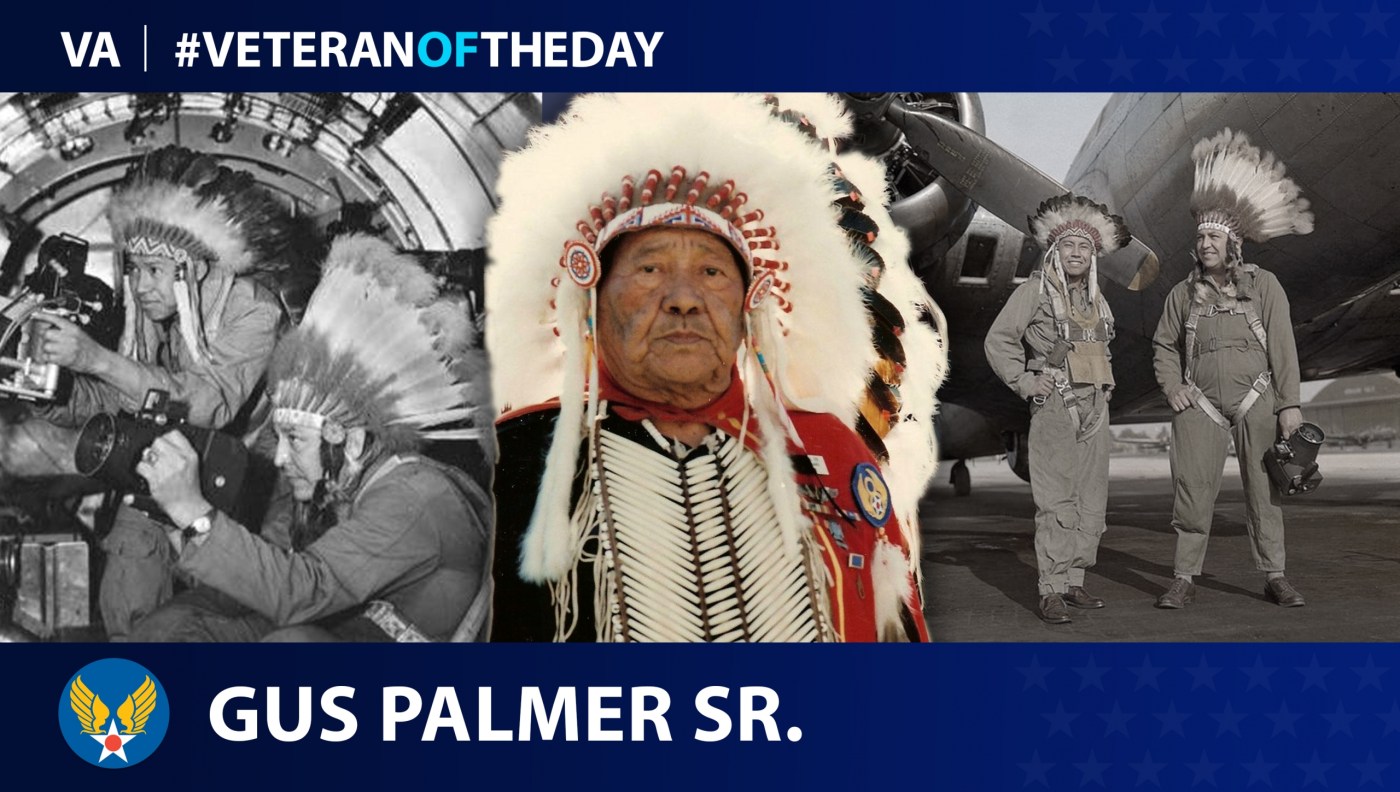 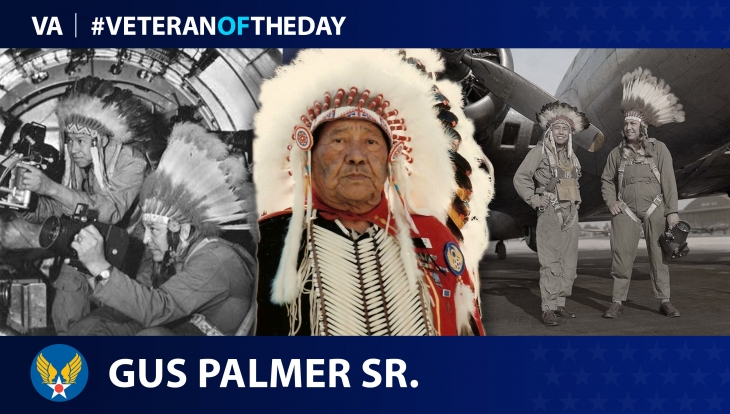 Gus Palmer Sr. was born in Redstone, Oklahoma, and was a member of the Kiowa tribe. In April 1944, he enlisted  and after basic training, went to the 413th Bomber Squadron as part of the 96th Bomber Group. Palmer served at Royal Air Force Snetterton Heath in southeast England as part of Eighth Air Force.

Palmer served as a waist gunner in the B-17 Flying Fortress. The primary duty of a waist gunner was to protect the aircraft from enemy aircraft. They also checked the aircraft for damage and assisted the flight engineer with repairs if necessary. Palmer flew 18 successful bomb runs during his service. He also became friends with a fellow Kiowa, Horace Poolaw, who was an aerial photographer. Palmer appeared with him in several of Poolaw’s photos, both wearing flight suits and war bonnets. An article on Horace Poolaw in the Magazine of the Smithsonian’s National Museum of the American Indian describes the dress of Kiowa soldiers in World War II as “a warrior in a different uniform.”

Palmer honorably discharged from the military in December 1945. During his service, he received a Presidential Unit Citation, Good Conduct Medal, and a European Theater Operations Campaign Medal with two bronze stars.

Following his military service, Palmer returned to his hometown. In 1958, he led an effort to revive a Kiowa Veterans group called the Kiowa Black Leggings Warrior Society. In William Meadow’s 2012 book “Kiowa Military Societies: Ethnohistory and Ritual,” Palmer explained that the reason he wanted to revive the society came from his World War II experiences overseas and his desire to give back to the community. He also wanted to honor the memory of his brother, Lyndreth, who had also served and was killed in action in Germany.

In a 2006 article from The Oklahoman, the Black Leggings’ annual ceremony was described as members dancing and singing dressed in black leggings and red capes, sometimes decorated with military medals and insignia. The society’s color guard appears regularly at ceremonies, parades and meetings across the state of Oklahoma.

“This is a unique organization,” Palmer said in a 2002 interview with The Oklahoman. “I’m proud to be keeping it like it is — to preserve and celebrate. This is all tribal way, tradition, custom.”

Palmer served as commander of the group until 2006, and according to a 2010 article in The Native Times, as part of his ceremonial regalia, he put 21 eagle feathers on his lance to represent the 21 bombing missions he made in World War II.

Palmer was also active in his tribe. He served as Kiowa chief from 1969 to 1970 and on the tribe’s Constitution Revision Committee in 1984.