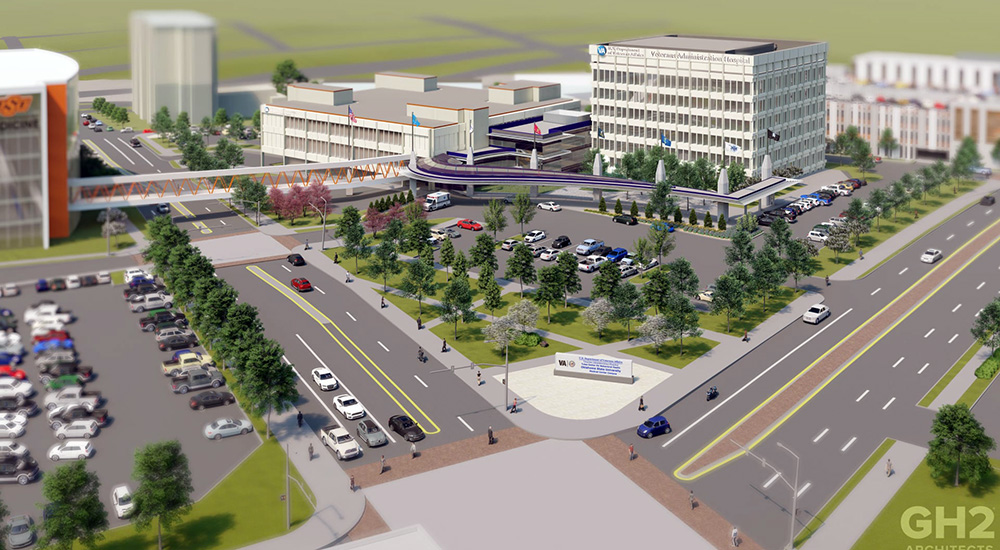 In 2024, the Eastern Oklahoma VA Health Care System will expand health care for Veterans by opening a new 58-bed VA hospital in Tulsa.

Located at 7th and Houston in downtown Tulsa, the VA hospital will be part of the Oklahoma State University (OSU) Medical Center Campus and the first VA hospital in the nation built as part of a public-private partnership.

The project is a combination of federal and private funds from the Anne & Henry Zarrow Foundation. The State of Oklahoma is also assisting by donating the Kerr-Edmondson buildings, which will be converted into the hospital. The City of Tulsa has committed to building a parking garage on site.

Earlier this month, national and local VA officials joined OSU, private donors and other city and state officials to celebrate the partnership and to ceremoniously break ground on the future hospital.

In July 2021, VA opened the new Ernest Childers VA Outpatient Clinic in Tulsa. The new clinic is more than four times the size of the previous Tulsa clinic and offers new services, such as endoscopy, chemotherapy/infusion, mammography and expanded outpatient services.

In 2022, VA will open a new outpatient clinic in Bartlesville, which provides Veterans care closer to home versus driving to Tulsa.

Future of the Muskogee campus

After a transition period, the Jack C. Montgomery VA Medical Center in Muskogee will become a regional hub for VA mental health care and will serve Veterans not only from eastern Oklahoma but from Oklahoma City and neighboring states as well.

The Muskogee campus will not provide emergency and medical-surgical care. It will, however, have more than 90 beds that will include the following:

In addition to inpatient services, the Muskogee campus will continue to offer outpatient primary and specialty care.

“The new VA hospital in Tulsa is a historic victory. It will offer long lasting and far-reaching benefits for our Veterans, VA and our community,” said Mark E. Morgan, director of the Eastern Oklahoma VA Health Care Center.

The Tulsa hospital is the first VA hospital built under the Communities Helping Invest through Property and Improvements Needed for Veterans Act of 2016 (CHIP-IN Act).

The act authorizes VA to form a public-private partnership and accept up to five donations from non-federal entities.