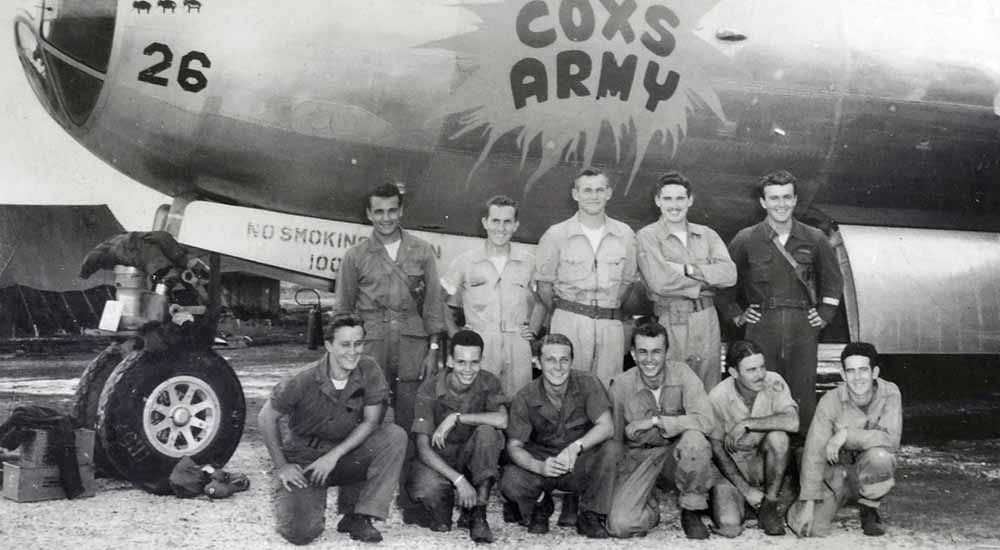 On Feb. 19, 1945, approximately 30,000 U.S. Marines landed on the tiny Pacific island of Iwo Jima. It took 36 days to wrestle it away from the 21,000 Japanese soldiers defending it ― most electing to die rather than surrender. U.S. casualties also were high. Almost 7,000 Marines and Sailors died and another 20,000 were wounded. The importance of capturing that small but well-defended island was to give U.S. forces access to an airbase that was closer to Imperial Japan. Located halfway between Tokyo and the American B-29 airstrips in the Mariana Islands, Iwo Jima would serve as a fighter escort base as well as an emergency airstrip for damaged bombers.

For one central Missouri Veteran, the capture of that tiny island would be a lifesaver on more occasions than he can remember.

Sturgell is in the front row kneeling, third from the left.

“We must have been forced to land on Iwo Jima seven, maybe eight times,” said James Sturgell, Army Air Corps Veteran. “I really can’t remember exactly how many times it was. But it was at least a half-dozen, if not more. Back then, planes required more maintenance than they do now, especially given the environments that we flew them in. Mechanical problems always were a concern. But once we had Iwo Jima, we had a safe place to land if we needed it. If we hadn’t captured that island, I probably wouldn’t have made it home.”

Sturgell grew up in Dayton, Ohio, and enlisted in the Army Air Corps on Sept. 3, 1943, just two weeks after his 18th birthday. He completed basic training at Jefferson Barracks in St. Louis, Missouri, as well as B-29 Central Fire Control System training.

“The B-29 was called the Superfortress,” Sturgell said. “It was the largest bomber we had at that time. To show you how large it was, it could carry about 10 tons of bombs. It also had ten 50-caliber machine guns that were operated remotely through a central fire control system. After I completed that course, I went through more flight-specific training.”

Sturgell was assigned to a plane and crew. To get into the war, they first had to fly their B-29 to California and then Hawaii. However, their final destination would be the island of Tinian in the Marianas.

“Our plane had mechanical problems on the way to California, so we made an emergency landing,” Sturgell recalled. “We then flew to John Rodgers Field in Hawaii. However, when we took off for Tinian, we had to return to Hawaii because of engine trouble. We did this several times. Finally, during yet another emergency return landing, we damaged the plane badly enough that they scrapped the entire aircraft and we were flown to Tinian by way of the ATC (Air Transport Command).”

By the time Sturgell reached his destination with the 5th Squadron, 9th Bombardment Group in early 1945, Tinian had been secured for only a few months. Japanese soldiers who refused to surrender hid by day and harassed U.S. forces by night. (Murata Susumu, the last Japanese holdout on Tinian, was captured in 1953.)

“We got our new plane on Tinian,” he added. “We named it ‘Cox’s Army’ after our captain, Burton Cox. The 12 of us began flying firebombing raids over Kobi, Osaka, Nagoya, and Tokyo. Each mission was about 3,000 miles round trip, which translated into a 15-hour flight. We flew at a height of about 4,000 feet for better accuracy. However, that also made us better targets for the Japanese antiaircraft gun crews.”

Wanted to end the conflict quickly

Toward the end of the war, most of the industrial sections of Japan had already been destroyed. But the militarized Japanese government still refused to surrender. To continue to produce war materials, they utilized a cottage industry model where items were manufactured on a small scale in the homes of Japanese residents. Because most Japanese structures were made of wood, firebombing was the most effective method of destroying this industry.

The sense of urgency Americans felt to end the conflict quickly was tempered by almost four grueling years of war as well as the guarantee that casualties would be astronomical if the allies invaded the Japanese home islands.

Additionally, Japan held more than 27,000 U.S. prisoners of war (POWs). Most of the POWs were forced to live and work under horrible conditions. Others were executed sometimes as American forces closed in on the camps where they were held. Of the Americans captured by the Japanese during World War II, four of every 10 prisoners died of starvation, illness, abuse or execution.

“We just wanted the war to end,” Sturgell said. “And we wanted to go home.”

Staff recognizes Sturgell and others for Veterans Day

After Japan formally surrender on Sept. 2, 1945, Sturgell, like others deployed overseas, made his way home slowly on a troop transport ship. For his service, Sturgell received the Air Medal with two oak leaf clusters, the Distinguished Flying Cross, a Good Conduct Medal, the American Campaign Medal, the Asiatic-Pacific Campaign Medal with two service stars and the World War II Victory Medal.

Following the war, Sturgell used his G.I. Bill to become a heating and cooling technician. After settling in Missouri, he began receiving his health care at Harry S. Truman Memorial Veterans’ Hospital in Columbia.

“The VA care I receive is great and I wouldn’t change it for anything,” Sturgell said.

November 11 is Veterans Day. The staff at Truman VA wish to recognize Sturgell and all other Veterans who served their country during war or peacetime as members of the U.S. Armed Forces. Thank you all for your service.

By Marissa Burstert is an advanced medical support assistant and Jeff Hoelscher is a public affairs officer at the Truman VA.