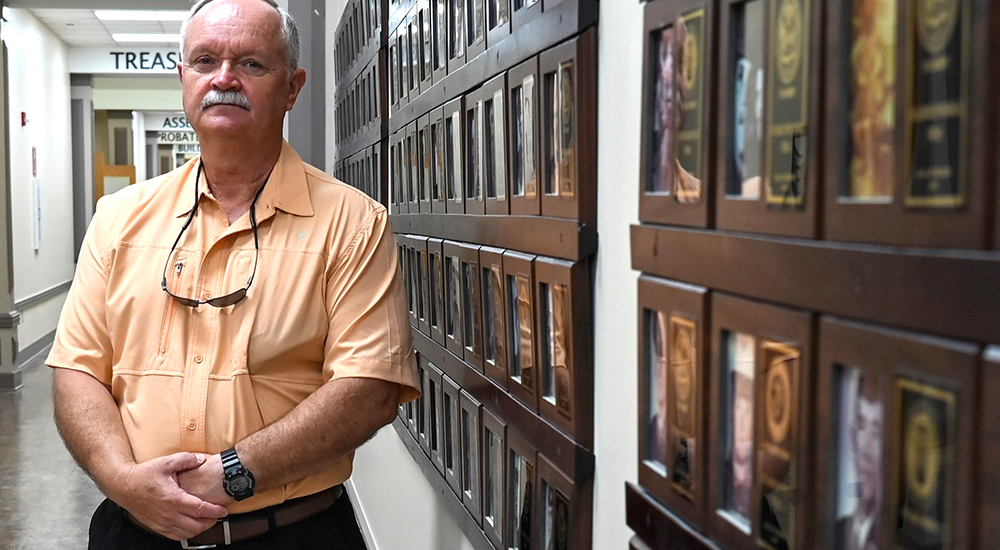 A South Carolina country boy from Hickory Tavern, Bolt was raised around the world. He moved from place to place every few years as his father received orders to a new duty station. His story was written long before his birth, as he came from a long line of men who served their country.

Less than a month after graduating high school, Bolt enlisted in the Army to carry on the tradition of family service into its third generation.

“Bootcamp was easy, it was like I was back at the house,” laughed Bolt. “There were boys in there crying and I was just thinking ‘Damn, this is like my daddy.’ This is something I’ve seen all my life.”

When asked what it was like to wear the uniform his father used to wear? “It gave me more clarity about the man my father was,” Bolt said. “I felt a lot of pride wearing the uniform.”

Army career around the world

Over the course of the next 22 years, Bolt’s tours of duty included:

After retiring in 1996, Bolt served his local community for the next five years as a police officer where he helped restructure its community service program for the county, focusing on helping young kids going down the wrong path.

“Through the years, I’ve met kids who still remember me,” he said. “When I helped those young kids, I was saving them from the wolves of their future, the penitentiary, things like that. I looked at them like they were my kids. A little compassion could make a big difference in their lives.”

While serving as a cop, Bolt forged many friendships, one of those being Barney Blackwell, the VSO for Laurens County. When Blackwell was preparing to step away from his position, he asked Bolt if he wanted to interview for the opening. He did, and when asked why he thought he could perform the duties of the job, he said “I lived the military as a kid and I lived it as a soldier. If you can find somebody better than that, give them the job.”

Hall of Heroes a way to recognize area Veterans

In 2004, Bolt was appointed VSO for Laurens County, a position he still holds. By his second year, he had forged strong bonds with the local Veterans in the community, most of them being Vietnam and World War II Vets.

“I got to looking at the discharges of some of the men I worked with and these men were like the Rambos of their time,” he said. “These men came back, went to work and never looked back. It was just another part of their life.”

Bolt recalls that the man who first inspired him to start the Hall of Heroes was W.R. Garrett, a local farmer. Garrett was awarded a Silver Star and three Bronze Stars for acts of heroism and bravery during his service in WWII.

“It killed me that people only knew that man as a damn farmer,” he added. “It was wrong, mind-boggling, that people didn’t know the awesome things he did.”

These Veterans only being recognized as farmers, neighbors, or shop owners didn’t sit right with Bolt. He wanted to ensure they received the recognition they deserved. Bolt started the Laurens County Hall of Heroes, a way of recognizing Veterans around the local communities.

Activities of the Hall include a ceremony awarding the new inductees with plaques, shadow boxes, and an outpouring of love from friends, family members and complete strangers.

The Hall of Heroes doesn’t require a Veteran to have performed heroic duties. Bolt wanted to highlight Veterans who impacted their local community as well. Though he thought the Hall of Heroes would be a one-time event for seven Veterans would draw a small crowd of 50-60 people, on the day of the induction, nearly 500 people attended.

“When I saw the crowd there to honor those men, I could not believe it,” he remarked.

After three years, Bolt’s Hall of Heroes has expanded to Greenwood County. His efforts have ensured that several hundred Veterans around the surrounding communities have been recognized for the sacrifices and contributions to the nation and local communities.

Along with the Halls of Heroes, Bolt established a military museum in Greenwood. Veteran volunteers operate the museum. It has thousands of pieces of memorabilia from guns and knives to uniforms, photos, and newspaper articles. All the items were donated by local Veterans.

Time to focus on grandchildren

Approaching retirement, Bolt says he is ready to focus on being a grandfather to his three grandchildren.

“All I want when I walk away is to know I laid down the cornerstone that will allow the successor to be take things to new heights,” he said.

For a man who claims to be a nobody, Bolt’s impact can be seen and felt across multiple South Carolina counties. Ask him about any Veteran in the Hall of Heroes and he’ll tell you their story.

By Wyatt L. Anthony is a Navy Veteran and a public affairs specialist for the Columbia VA.