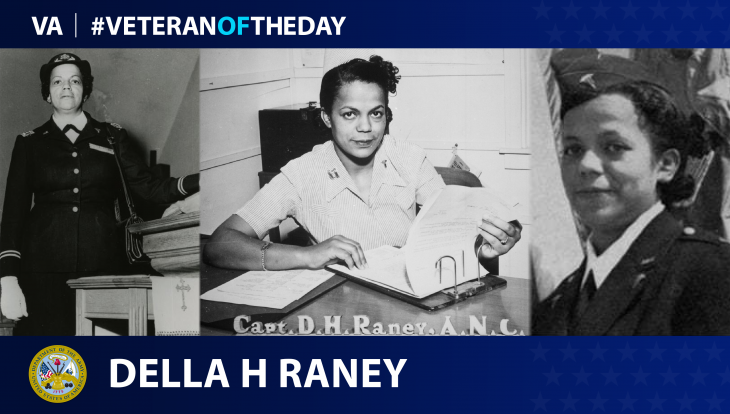 Della Hayden Raney Jackson, known as “Maw” Raney by her peers, was born in January 1912 in Suffolk, Virginia. She attended the Lincoln Hospital School of Nursing in Durham, North Carolina. After graduating in 1917, she remained in Durham to work as an operating room supervisor. As the U.S. entered World War II, Raney applied to join the Army Nurse Corps (ANC). During this time, nurses needed an endorsement from the American Red Cross to be eligible for military service. Raney penned a letter to the American Red Cross director to express her wish to serve and practice her profession. The Army Nurse Corps initially denied her on the basis of race, yet Raney persisted. In April 1941, she became the branch’s first African American nurse.

At the rank of second lieutenant, Raney’s first assignment was in the hospital ward at Fort Bragg, North Carolina. There, she cared for wounded or ill African American soldiers, who at the time were segregated from white soldiers. After six months at Fort Bragg, she promoted to chief nurse. In March 1942, Raney advanced to the rank of first lieutenant and transferred to Tuskegee Army Airfield in Alabama. She served two years in their base hospital, becoming chief nurse and leading the first five African American nurses there. Raney was the first African American to hold the title of chief nurse in Army Nurse Corps history. It was also at the Tuskegee hospital where she earned the affectionate nickname of “Maw” Raney.

In June 1944, Raney became chief nurse at Fort Huachuca, Arizona, and promoted to captain the next year. At the conclusion of World War II, she moved to serve at Beale Air Force Base, California, where she managed the nursing staff at the base’s 1,000-bed medical facility. Raney promoted to major in 1946 and began a tour of duty in Japan that same year. She later returned to Beale Air Force Base as the base hospital’s director of nursing following her time in Japan.

Raney retired from the Army in 1978. She achieved the highest rank of any African American nurse who served during World War II.

Raney Jackson died in November 1987. In 2012, the Tuskegee Airmen Foundation and the National Black Nurses Association established a scholarship in her memory.