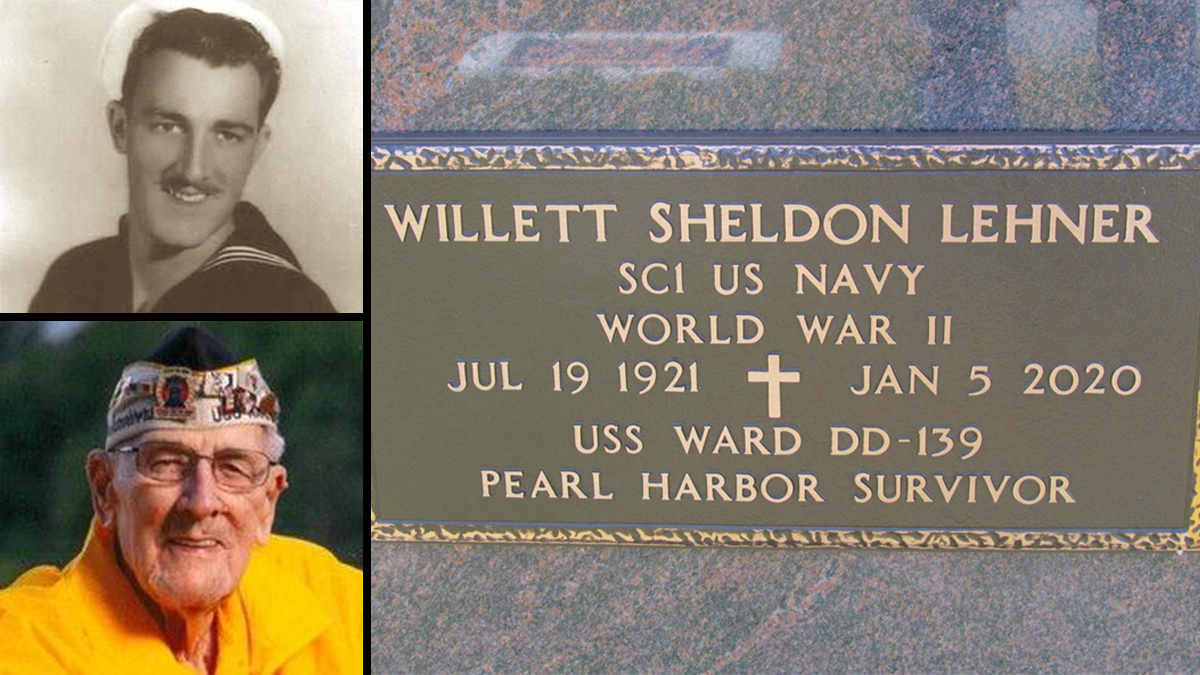 On Dec. 7, 1941, Willett “Will” Lehner was aboard USS Ward (DD-139), a World War I “four-stacker” patrolling the entrance to Pearl Harbor. Lehner, a mess cook and number four gun ammunition handler, spent the entire war aboard USS Ward, the ship credited with firing the first American shot during World War II.

At 0400, on the morning of Dec. 7, the Ward received a blinker signal from the Minesweeper Condor, “HAVE SIGHTED A SUBMERGED SUBMARINE ON A WESTERLY COURSE, SPEED NINE KNOTS.”

Below deck, Lehner ran up to his battle station on the starboard side aft. According to World War II historian Richard C. Klobuchar, many of the men grumbled all the way wanting to know “what kind of skipper calls a General Quarters drill that early on a Sunday morning.”

For the next two hours conflicting messages came. The captain, William W. Outerbridge, spent an hour circling the Condor. Finding nothing, he concluded that they had seen a buoy, not a submarine.  Lehner, with most of the crew, went back to sleep. The Japanese midget submarines and their two-man crew continued to operate undetected and “take positions of readiness for war with the United States of America,” said Vice Admiral Mitsumi Shimizu on Nov. 16. “Under no circumstances should you take action unless ordered.”

By 0630, the area around the harbor became far more crowded.  Five Japanese midget subs, U.S. Navy fleet tugs Antares and Keosauqua, the Minesweeper Crossbill, and a PBY patrol plane joined USS Ward near the front of the harbor. Several noted an object following the Antares. When Outerbridge made it back to the bridge from the chart room, he determined that it was a submarine and ordered all engines full ahead.  The ship’s speakers blared, “GENERAL QUARTERS GENERAL QUARTERS! ALL HANDS MAN YOUR BATTLE STATIONS! MAN ALL GUNS! PREPARE DEPTH CHARGES! PREPARE TO RAM!”

Lehner made it back to his battle station and noticed the strange object following the Antares. From his position, he witnessed the entire action. Within a range of 200 yards, Ward’s gun number one fired first missing by 100 yards. Next, gun number three fired the fatal shot from 50 yards into the exposed conning tower. Someone yelled, “It’s a hit.  A clean hit.” A little over one hour later, the Japanese aerial attack on Pearl Harbor began.

For the next three years, USS Ward served in the Solomon Islands carrying troops and cargo to Guadalcanal. Several of the crew remembered loaning a bilge pump to the young skipper of PT-109.  USS Ward continued troop and cargo missions in New Britain and New Guinea throughout 1942-43. Lehner and the crew enjoyed the port city of Sydney, Australia, twice as they prepared for operations in the Philippines.

Three years later to the day after Pearl Harbor while supporting operations in the Philippines, Japanese kamikazes attacked USS Ward in Ormoc Bay.

“I could clearly see the Japanese bomber coming,” said Lehner.  “This one hit us right at the waterline where it had the best chance of sinking us.”

Outerbridge, then captain of USS O’Brien, ordered the ship sunk. In another twist of fate, Outerbridge was the captain of USS Ward during the operations at Pearl Harbor. Lehner remembers being one of the last off the ship.

“It was my home for three years,” said Lehner. “I didn’t want to leave her.”

Remarkably, no men died and only a few received injuries during the evacuation. Many joined other ships. Lehner went to the Navy hospital in San Francisco with a severe case of battle fatigue.  He had lost 53 pounds.

In 1947, several men from the 47th Division from Minnesota that served on USS Ward started the “First Shot Naval Vets.” The organization led the effort to relocate the number three gun warehoused at the Navy Yard in Washington, D.C., to St. Paul, Minnesota. Eighty-two naval Reservists of the 47th Division were from Minnesota from an official roster of 50 officers and 454 enlisted men.

Despite eyewitness accounts from USS Ward crewmembers, there was no corroborating evidence to show that they sunk a Japanese midget submarine.

In 1991 and 2000, two independent research teams searched for USS Ward, but found nothing.

The Hawaii Underwater Research Lab (HURL) of the University of Hawaii used newly acquired side-scan technology in 2002 and found a Japanese midget sub in 1,200 feet of water.

In 2003, at the urging of an independent television station HURL made another dive, this time with a member of USS Ward’s crew.

“As I peeked out the window of the research vehicle and saw the midget lying on the seabed, the hairs on the back of my neck stood straight up,” said Lehner. “I saw the sub 61 years ago on the surface and I saw it go down.  Now I was seeing it once again.”