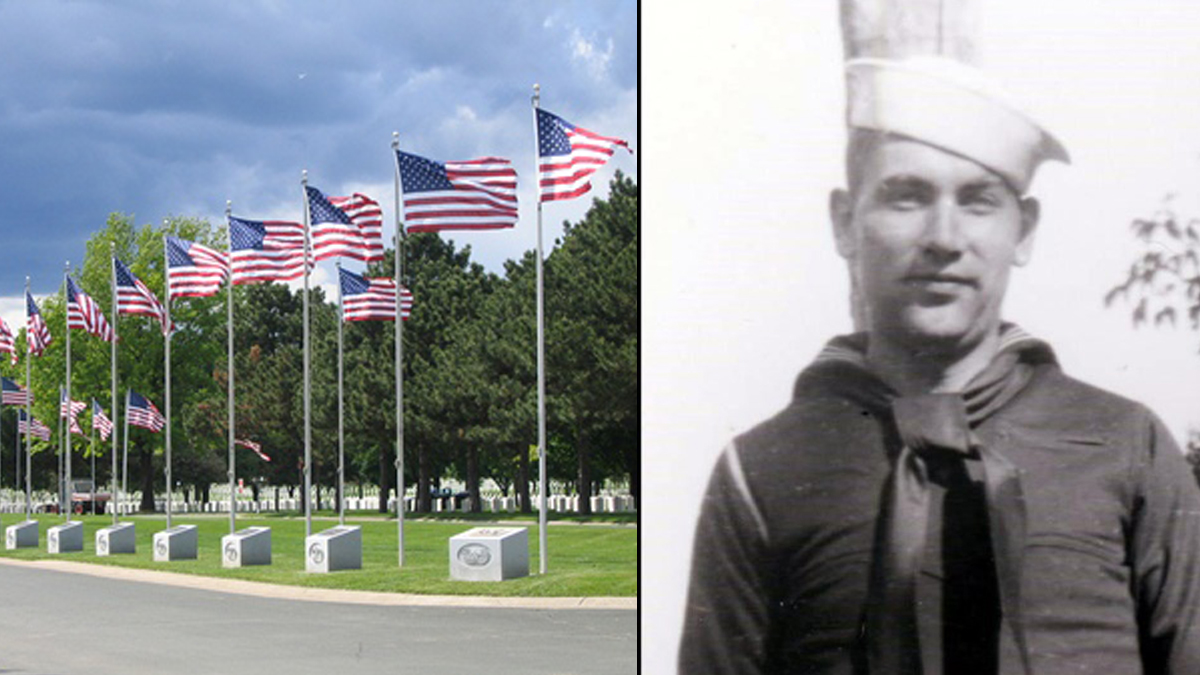 At Pearl Harbor on early Sunday morning, Dec. 7, 1941, the USS Oklahoma was moored at Berth F-5 next to the USS Maryland along Battleship Row, a grouping of eight battleships. The battleship was commissioned in 1916 and saw duty in World War I, protecting Allied convoys to Europe.

At 7:55 a.m. local time, the first Japanese dive-bomber appeared over Pearl Harbor. It was part of the first wave of nearly 200 aircraft including torpedo planes, bombers and fighters.

By the time the surprise attack ended shortly after 9 a.m., Japanese forces had sunk nine ships, including four other battleships (Arizona, California, West Virginia, and Utah) and had severely damaged twenty-one ships. The Oklahoma suffered nine torpedo hits causing it to capsize in under 12 minutes from the start of the attack.

From December 1941 to June 1944, Navy personnel recovered the remains of deceased crews, which were subsequently interred in the Halawa and Nu’uanu Cemeteries on Hawaii.

In September 1947, the American Graves Registration Service disinterred the remains of U.S. casualties from the two cemeteries and transferred them to the Central Identification Laboratory at Schofield Barracks. The laboratory staff was only able to confirm the identifications of 35 men from the USS Oklahoma at that time. The American Graves Registration Service subsequently buried the unidentified remains in 46 plots at the National Memorial Cemetery of the Pacific, also known as the Punchbowl.

In April 2015, the Deputy Secretary of Defense issued a policy memorandum directing the disinterment of unknowns associated with the USS Oklahoma.

“During the summer of 2015, Defense POW/MIA Accounting Agency and cemetery caretakers at Punchbowl disinterred 388 USS Oklahoma Unknowns,” said Gene Maestas, National Memorial Cemetery of the Pacific public affairs specialist. “After a dignified transfer ceremony was conducted, the remains were released to DPAA for identification.”

Scientists from the agency and the Armed Forces Medical Examiner System use mitochondrial DNA analysis, dental and anthropological analysis, as well as circumstantial and material evidence, to identify remains. Of those 388 Oklahoma Unknowns, 346 were identified with 33 families choosing to reinter their loved ones at Punchbowl.

Nine servicemen, who perished at Pearl Harbor are buried at Fort Snelling National Cemetery in Minnesota. Despite the passage of time, the ceremonies can get quite emotional. In 2018, when Navy Radioman 2nd Class Quentin Gifford’s body was identified, his two surviving siblings, Harold Gifford, 94, and June Shoen, 81, wanted their brother returned to Minnesota and interred at Fort Snelling.

Gifford’s name is recorded on the Courts of the Missing at Punchbowl.  After he was identified, a rosette was placed next to his name to indicate he was accounted for.

“Eighty years after the attack on Pearl Harbor the important work of identifying the remains of those lost continues,” said VA Secretary Denis McDonough.  “As a native Minnesotan, I am humbled that nine servicemen who perished at Pearl Harbor have a final resting place of dignity, honor, and respect at Fort Snelling National Cemetery.”