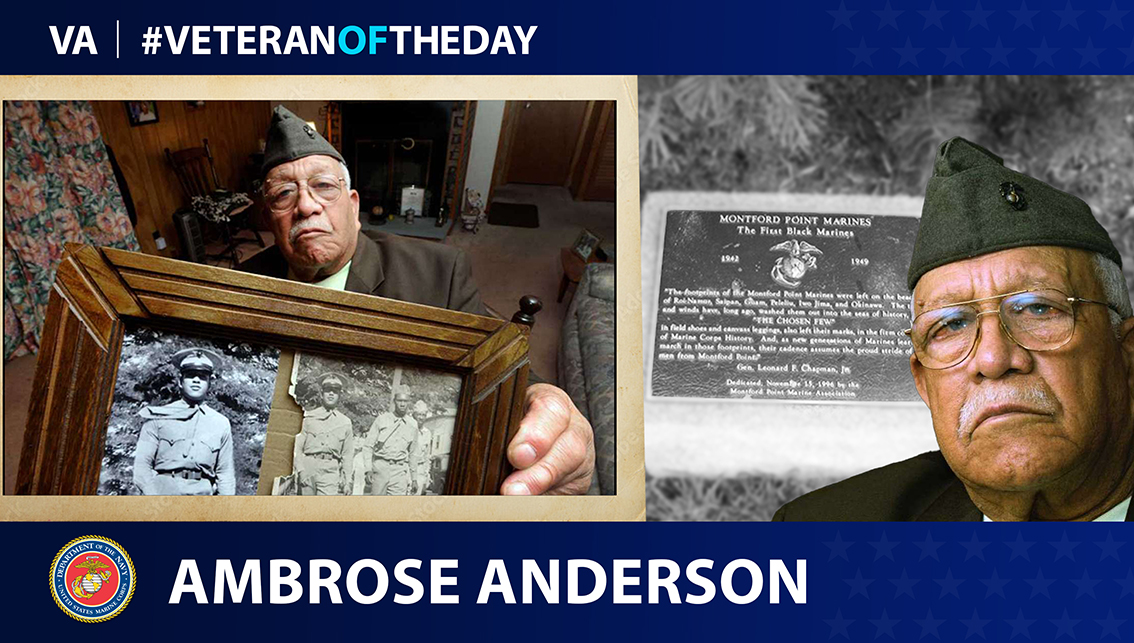 Ambrose “Cowboy” Anderson grew up in Gloversville, New York. Growing up, he received the nickname “Cowboy” due to his love for playing cops and robbers. He was also a successful football player for his high school team.

In 1943, the Marine Corps drafted Anderson at the age of 19. He went to Jacksonville, North Carolina, for training at Camp Montford Point. Camp Montford Point was a segregated training camp separated from Parris Island, where the white Marines trained. Despite a 1941 order to desegregate the military, the Marines had yet to complete the process of desegregation. Anderson was among the first group of African Americans to serve in the Marines and experienced racism alongside his Montford Point peers. Their time in the military consisted of facing these barriers and working to overcome them, in addition to facing the challenges of service during wartime.

As part of the 8th Ammunition Company, Anderson went to Japan in 1946. On the way there, his ship faced kamikaze attacks, killing fellow service members. Upon arriving in Japan, Anderson and his unit fought during the battle of Iwo Jima, providing ammunition to front lines.

After the battle of Iwo Jima, Anderson went to Sasebo, Japan, to serve during the U.S. occupation of the city. Anderson discharged in April 1946. He returned home and received little recognition for his service.

After his service, Anderson married twice and was a father to six children while working as a truck mechanic in his hometown.

Anderson was honored in 2012 alongside other Montford Point Marines with a Congressional Gold Medal “in recognition of their personal sacrifice and service to their country during World War II.” New York state also honored Anderson for his service. In 2020, on his 95th birthday, he received a New York State Liberty Medal in recognition of his service and valor.